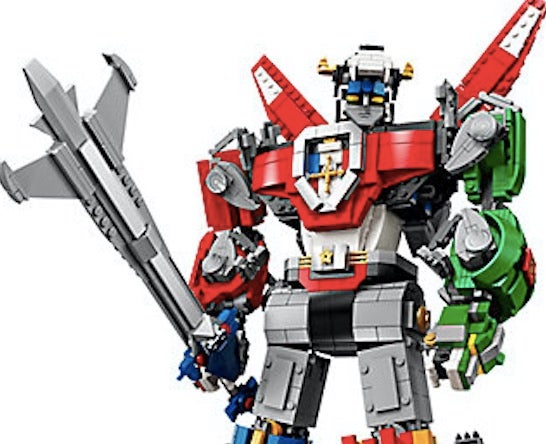 Lego paid tribute to the classic super-robot Voltron with a new brick set based on the iconic mechanical hero.

Lego’s online shop described the set as the “biggest buildable Lego mech ever.” The set comes with all five posable lion robots. These lions could then be combined to form the super-robot Voltron.

Inspiration for the set came from Lego Ideas user len_d69, who submitted the idea in 2016. Lego later confirmed the go signal for len_d69’s Voltron design on Aug. 3, 2017.

The Voltron set includes over 2,321 pieces and is priced at $179.99 or around P9,600. The fully formed Voltron stands at over 15 inches tall and its sword measures 11 inches long. Individually, the Black lion stands at 6 inches tall, while the other four lions are half that at 3 inches in height.

While the Lego store release has been scheduled for Aug. 1, Gizmodo reports that limited quantities will be sold at the upcoming 2018 San Diego Comic Con, which will take place at the San Diego Convention Center, California, from July 19 to 22.

“Voltron: Defender of the Universe” initially aired between 1984 and 1985 with 72 episodes in total. The animated show was adapted from a Japanese anime by Toei Animation titled “Beast King GoLion.” The first season, which aired in 1984, featured the “Lion Force Voltron.” The second season, which aired in 1985, featured the “Vehicle Team Voltron,” which was adopted from Toei’s “Armored Fleet Dairugger XV.” The show would later be revived in 2011 with Nictoons’ “Voltron Force” and Netflix’s 2016 Voltron: Legendary Defender.  /ra

Lego bricks to be made using sugarcane bioplastic