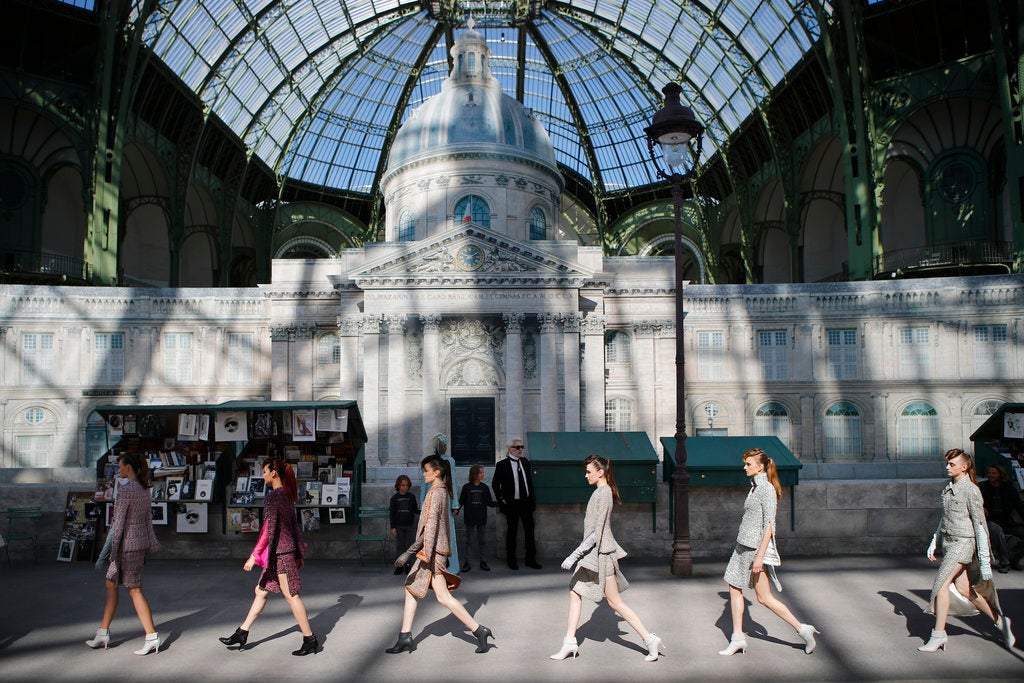 PARIS (AP) — Paris — the City of Light, lovelocks and the Seine River— was the backdrop Tuesday in Chanel’s sublime couture collection that showed designer Karl Lagerfeld is still at the top of his game at 84.

Penelope Cruz, Pharrell Williams and Lily Allen applauded after the cinematic runway display in which the French fashion house painstakingly recreated a Parisian cityscape — all inside the nave of the Grand Palais.

No detail was spared: from the padlocks on the famed Pont des Arts bridge to the surrounding riverside booksellers (with Chanel-themed literature), to thick city stones and the majestic domed French Academy.

But this fall-winter season, couture was the true star of the show. Here are some highlights from Tuesday’s collections.

Mirroring the nostalgic Parisian decor, Chanel’s 67 accomplished looks came in the colors of the city.

Light gray stood for zinc rooftops, almond green for historic building roofs, anthracite for roads and gold and silver — so said the program — for “reflections of the moon in the rippling Seine.”

But it wasn’t just in the color.

The myriad interlocking crystal embroideries were said to mirror cobblestones and the netted tulle that was embroidered with gold aimed to capture the lovers’ padlocks on the Pont des Arts (that were famously banned by Paris authorities).

These poetical explanations were nice but unnecessary for a collection that didn’t need any gimmicks to impress. Lagerfeld raised the bar this season — and it was the inspired sleeve silhouette that did it.

Sleeves flapped and unfurled in a unique bell shape, which was achieved thanks to an open arm zipper. It possessed a fresh sporty-meets-regal air.

The unfurling shape moved down the body into long split skirts that sported open panels at the sides and another skirt underneath.

Folded cuff boots furthered this unfurling dynamic. The cuff opened out of the shoe stylishly — in black, white, gray or in iridescent embroidered sequins. NVG