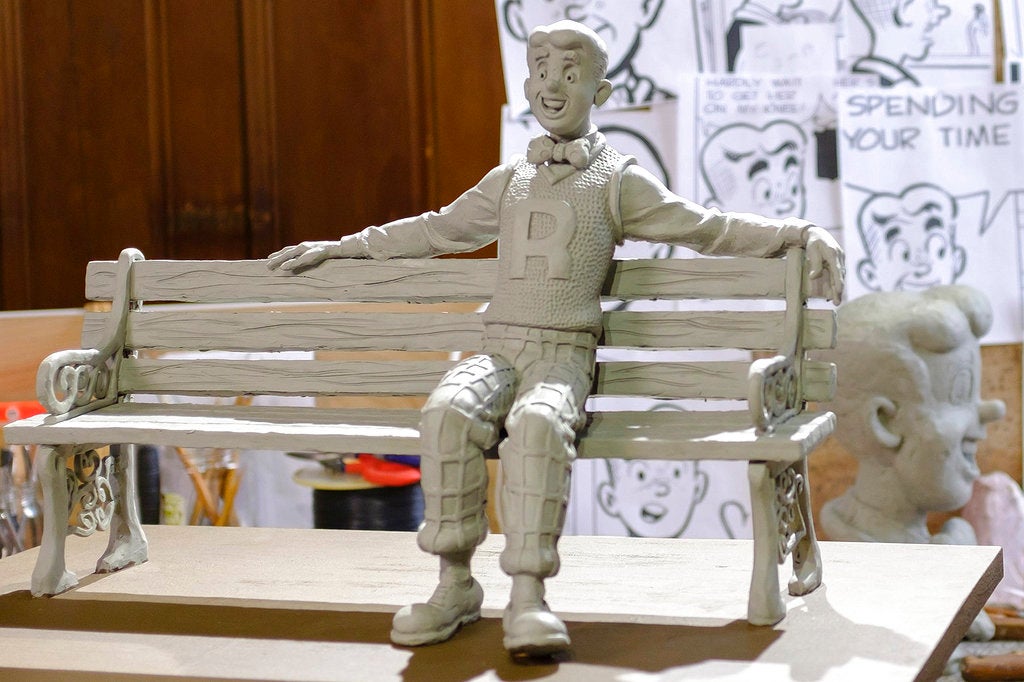 In this April 19, 2017 photo provided by Morgan Karanasios, a clay model for Valery Mahuchy's bronze statue of the comic book character "Archie" is displayed the sculptor's studio in Bethlehem, N.H. Bob Montana, who was the first to draw original depictions of the "Archie" characters, lived in Meredith, N.H., for 35 years until his death in 1975. The life-sized bronze statue of "Archie" is scheduled to be installed Aug. 9, 2018, in Meredith's Community Park to coincide with the town's 250th anniversary. (Morgan Karanasios via AP)

CONCORD, N.H. (AP) — A life-size bronze statue of a red-haired, freckled Archie will soon greet visitors at a New Hampshire town in honor of the local man who drew the comic book character and his group of wholesome teenage friends.

Bob Montana illustrated Archie, Betty, Veronica and Jughead from 1942 until his death in 1975 at age 54. He lived in Meredith, New Hampshire, for 35 years until he died from a heart attack while cross-country skiing.

“It is a privilege to be able to draw attention to one of our community members who did so much and did it so quietly and so well,” said Monica Philbin, executive director of the Greater Meredith Program.

The Greater Meredith Program, a community development nonprofit, raised nearly $57,000 for the project in less than six months mostly from residents. Architect Chris Williams originally suggested the idea to honor the former Meredith resident with an Archie statue. Williams said no other sculpture of the character exists anywhere.

The one-of-a-kind statue will be commemorated Aug. 9 in Meredith’s Community Park to coincide with the town’s 250th anniversary.

Montana brought the Archie Andrews character to life when he drew the first “Archie” comic strip while renting a cottage on Lake Waukewan in 1942. He was joined by other illustrators over the years, including Tom Moore, who also chronicled Archie’s escapades from 1953 until he retired in the 1980s.

The comic strip was distributed in newspapers nationwide a few years later. Its popularity led the company that originally published the comic books, MLJ Comics, to change their name to Archie Comic Publications in 1946. Over the years, the comic sold billions of copies worldwide and inspired several television shows including “Sabrina the Teenage Witch” and “Riverdale.”

In a book about Montana’s life, author Carol Lee Anderson noted that he placed Archie at various New Hampshire landmarks, including Lake Winnipesaukee, and even modeled characters after people in the Lakes Region town. Archie’s gang of friends were said to be inspired by the cartoonist’s high school classmates in Haverhill, Massachusetts, and Montana used drawings of his characters for community fundraisers, including an effort to save a mill building in Laconia.

“My father was very proud to be able to earn his living by bringing a smile to people’s faces,” said his daughter Lynn Montana, who lives in Meredith. “He wanted to empower Archie as a force of good that was bigger than the comic strip.”

Despite his fame, Lynn said her father was a humble and private man, partially why he raised his family in “peaceful” Meredith.

“In his eyes, Archie was famous, but he was not,” Lynn said.

Montana’s impact in Meredith went beyond the comic strip. He had a vision of turning Meredith into an art colony, his daughter said, at one point converting a gas station into an art studio and frame shop. He introduced several artists to the small town and created a local theater group.

Montana once united the community to change zoning laws, which prevented commercial development from being built along the waterfront in Meredith. He also successfully fought to have the town’s parking meters removed, according to his daughter.

“He was a lot more than just a cartoonist, he was a wonderful friend, neighbor and leader in our community,” said the project’s chairman, Jim McFarlin, adding that there are still people in Meredith who remember the days when Montana would take children out for rides in his 1923 Model T Ford, the same car Archie drove in early comics.

The beaming statue will sit on a bench and look toward his workshop, now vacant, where Montana spent his days quietly drawing cartoons. The Belarusian artist commissioned to do the sculpture, Valery Mahuchy, said he wants to bring people together and offer unity with the statue.

“It’s like a dream come true to have my father permanently honored in the town and we’re so grateful to the community for supporting it in the way they have,” Lynn said. “It’s a testament to my dad’s work that it’s still alive and meaningful to people today.” AB