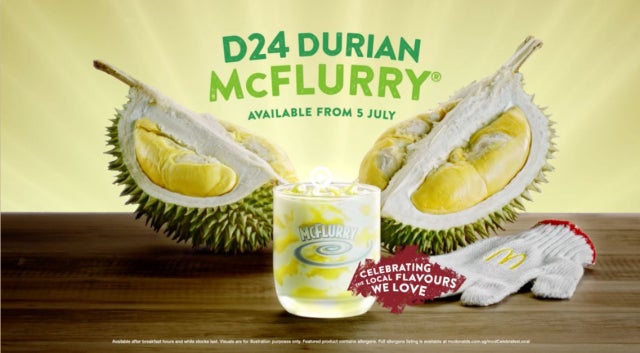 McDonald’s Singapore has turned the world’s stinkiest fruit, described variously as a mix of rotten onions, raw sewage and turpentine, into a frozen dessert.

Though the fruit is so pungent it’s been banned in hotels, subways, buses and airports across parts of Southeast Asia, the international fast food chain has gone and created a durian-flavored McFlurry for consumers in Singapore.

Made with vanilla ice cream and swirls of puree based on the D24 durian — an introductory variety, thick and creamy, bittersweet and less potent — the D24 Durian McFlurry is being launched ahead of National Day of Singapore August 9. Durian is the national fruit of Singapore.

The move follows that of the chain’s Malaysian counterpart, which launched a durian-flavored McFlurry last year. The product became a huge hit among durian lovers across the country, selling out within a week.

Durian flesh itself is a creamy custard-like pulp and has been described as a mélange of nuts, vanilla, ripe cheese, bananas, garlic, caramel, and onions — all at once.

The D24 Durian McFlurry will be available for SGD $4 and launches July 5. AB