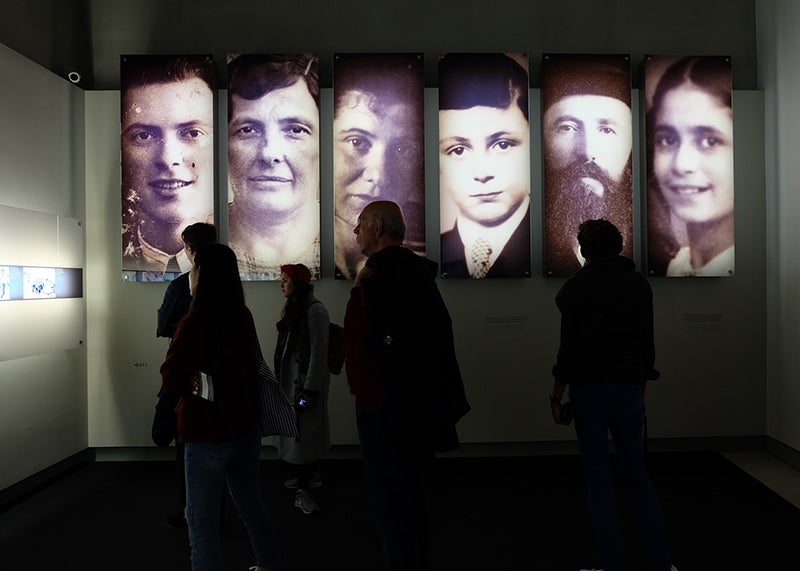 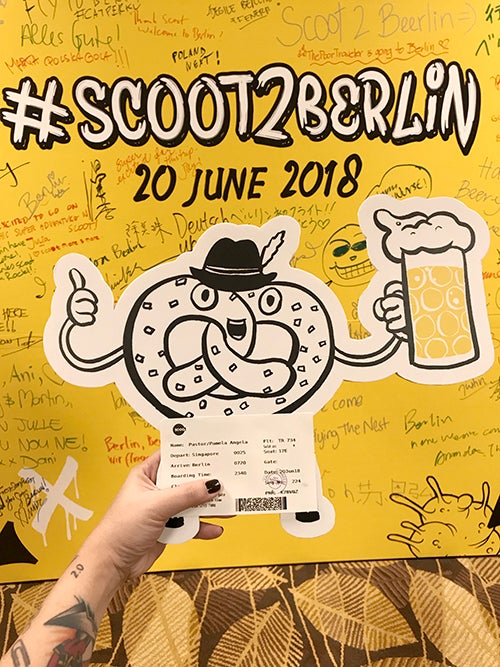 Passengers of Scoot’s flight TR734 on June 20 left messages on the #Scoot2Berlin wall before boarding. “Berlin here we come!” someone wrote.

We thought so too, but some friends had doubts when they heard we were flying to Europe on a budget carrier. “I wonder what the seats are like,” said one. 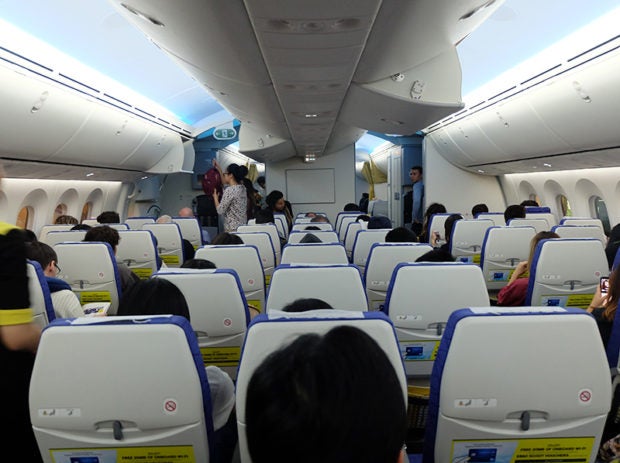 Our economy seat aboard Bo Jio, one of Scoot’s 17 all-new Boeing 787 Dreamliners, was comfortable. (Yes, Scoot names its aircrafts and we hope to one day ride the Kamascootra.) We were surprised to realize that even with our backpack stowed under the seat in front of us, we still had space to stretch our legs. There was plenty of space in the overhead bins, too—our suitcase slid in easily, no pushing and cramming needed, another benefit of flying on a wide-body aircraft. (Like the Scoot website says, “Size matters!”)

Scoot, the low-cost carrier of the Singapore Airlines group, flies to 66 destinations across 18 countries. Berlin is its third long-haul destination after Athens and Honolulu, both launched last year.

He added, “Scoot is very excited about flying into Berlin. Scoot counts millennials as one of the most engaged and supportive customers and Berlin is renowned for its youthful population and is one of the world’s most exciting cities for millennials.”

The flight was 95 percent full with 311 passengers onboard. More than half of them were between the ages of 18 to 35. It was the perfect crowd for an in-flight party. Oh yes. There were rainbow lights, there were games, there was a raffle, there was even a dance-off. “It’s not a flight, it’s a party,” we posted on Instagram Stories using Scoot Wi-Fi. 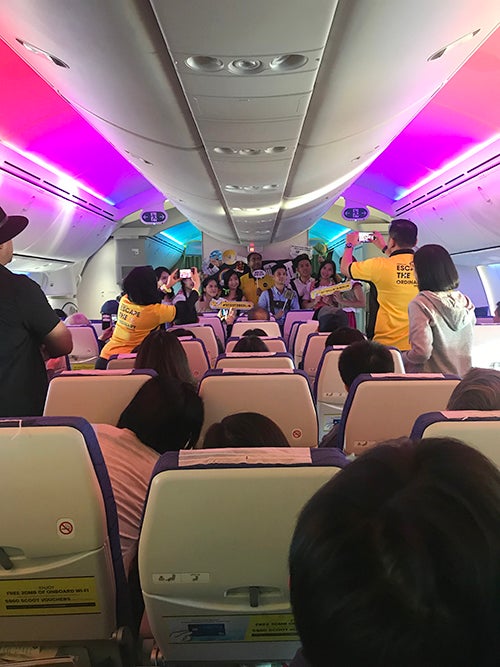 The sleeping passenger sitting in 13H won a hundred-dollar travel voucher in the lucky draw. “It’s the best thing to wake up to,“ said host Daryl Epimaco.

We purchased some snacks and drinks from Scoot Cafe and settled back to watch comedy on the ScooTV app in our phone before snoozing. It was a smooth, swift ride—the 12 hours flew by. 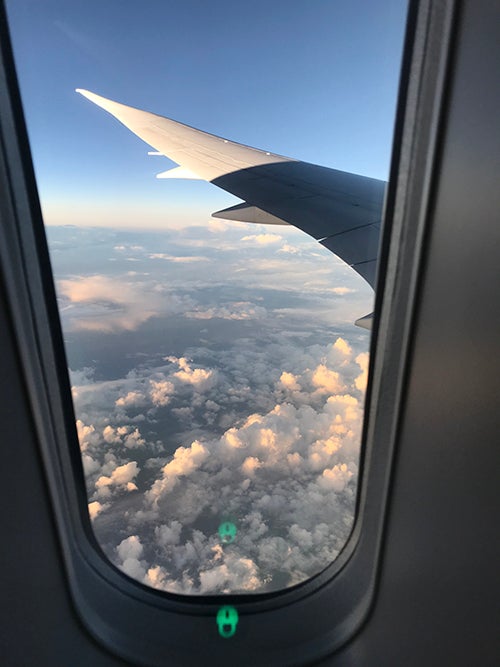 “We hope you enjoyed your Scoot experience,” we were told as we descended.

People applauded when we landed (13 minutes ahead of schedule!) and our flight was welcomed with a water cannon salute. “Please don’t be alarmed,” the captain announced.

As we disembarked, little teddy bears wearing BER shirts greeted us. We had arrived at Berlin’s Tegel Airport and it was time to start exploring. 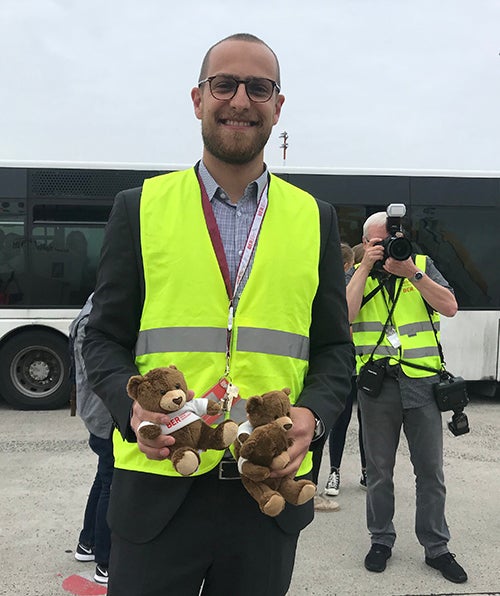 It’s Sunday and Mauerpark’s concrete amphitheater was packed with people. Two girls were on the makeshift stage singing “My Heart Will Go On.” They met only moments before but that doesn’t matter, their arms were linked and they were drinking from the same beer bottle. Over a thousand people joined them in chorus, with some pairing off to dance to the Titanic theme song. One guy took a running leap and his friend lifted him in the air, Dirty Dancing-style. The crowd cheered.

This was one song out of many sung that drizzly afternoon at the open-air Bearpit Karaoke, which has become a phenomenon. There, people from all over the globe—Brazil, Ireland, Italy, Texas, Afghanistan—come to belt out their favorite songs in front of the world’s most supportive audience. You may be tone deaf and off-key and you will still be met with applause and whistles. 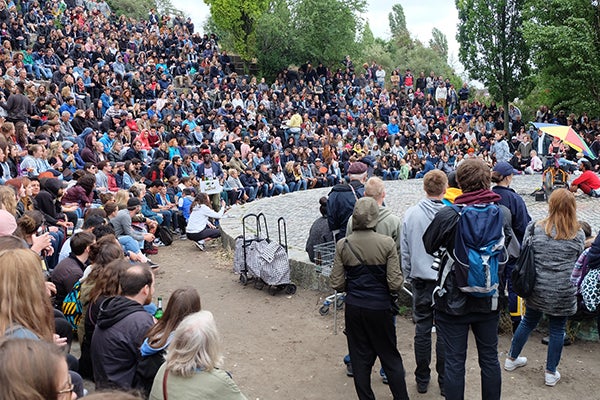 Earlier, a man from Yemen stood onstage. It was his birthday, he said, and he wanted the crowd to sing for him. They sang “Happy Birthday”—in four languages.

This is Berlin. Crazy, welcoming, surprising and incredibly fun.

Hidden below the 2,700 slabs of concrete that make up the Memorial to the Murdered Jews of Europe is the Information Centre. In the Room of Dimensions, panels on the floor display excerpts from diaries, postcards thrown out of trains and letters written by victims of the Holocaust. “Dear father! I am saying goodbye to you before I die. We would so love to live, but they won’t let us… I am so scared of this death,” read one.

In another room, you can listen to the names and biographies of Jews who went through hell during the Nazi regime. If you want to hear all the names, you will have to sit there for more than six years and seven months. And they’re still adding more. 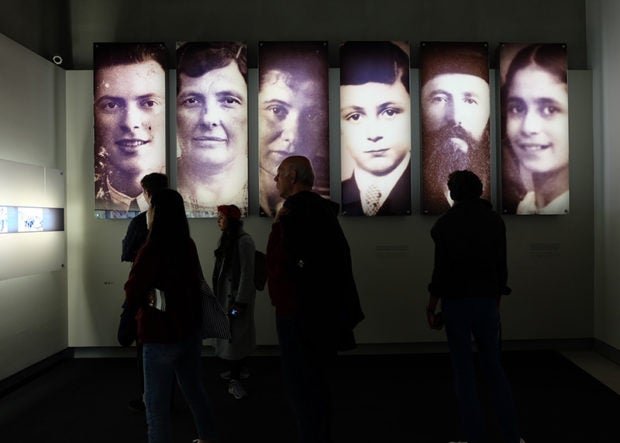 It is room after room of horror and sadness—lives lost, families torn apart, maps that show the magnitude of terror. It is gutting, your tears may fall, but you will not and you cannot look away. The words of Primo Levi are on a wall: “It happened, therefore it can happen again.”

This is Berlin, too. Heartbreaking. Teeming with history. And it holds on to the past so the rest of us wouldn’t forget.

“Everybody, please follow me to the death zone,” said Bernd Gutberlet, our guide from Art:Berlin.

He showed us the death strip where watch towers, alarms, spikes, barbed wire, guard dogs, floodlights and machine guns were once utilized to prevent people from crossing the Berlin Wall.

It is impossible to go to Berlin and not think about or hear about or see remnants of the Wall that used to divide the city. It’s the stories of the people that hit the hardest—families separated, desperate souls leaping from windows, Wolfgang Kuhn and his lone suitcase, Hubert Hohlbein’s underwater escape and the tunnel he built to get others to safety, Peter Fechter bleeding to death when bullets cut short his attempt to flee. 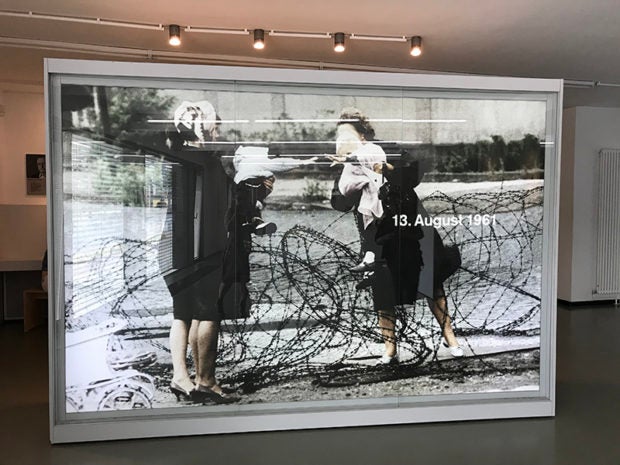 Bernd, who had taken us on a journey through the Wall’s horrors, lit up when we visited Brandenburg Gate, which has become a symbol of freedom and unity after the Wall fell in 1989. He said, “When I was young, I used to think I could never walk through it. Now, I can do it every day and it’s still special to me.”

Beer, so much beer

But our goal was not to drink water in Berlin. We were there for the beer. We had a lot of it—Berliner Kindl Pilsener at Drinx, the bar at our hotel Capri by Fraser, and at Bar 203 in Berlin Television Tower, Radeberger Pilsner at The Grand, and Brauhaus Neulich Summer Ale at the crazy, messy, delightful labyrinth-slash-abandoned amusement park-slash-dingy wonderland that is Birgit & Bier. 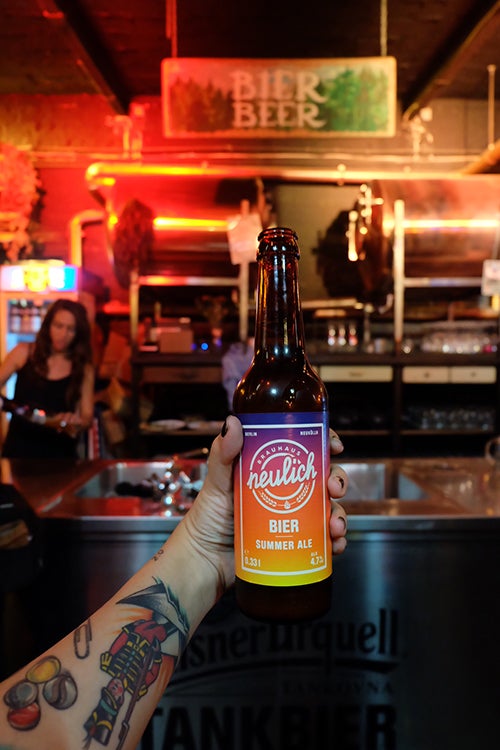 “Let’s go for one beer,” we said after dinner on Thursday night.

Dov Selby of Fork & Walk Tours Berlin replied, “I say that and then I come home Monday. That’s one beer in Berlin.” 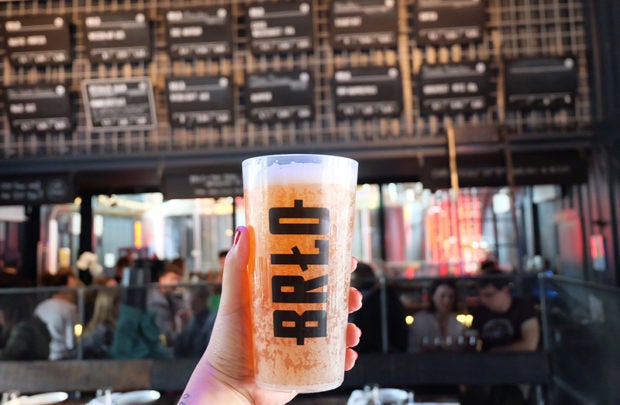 At Brauhaus Lemke, Berlin’s oldest craft beer brewery, we had the Budike Weisse and the India Pale Ale with sausages and schnitzel. “If you don’t drink, pass on your bottle to your seatmate,” the brewery guys said. We ended up with multiple bottles and a big smile on our face. 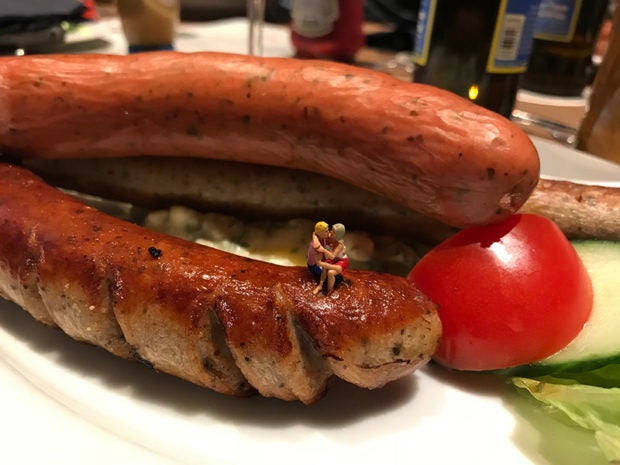 You can walk into any restaurant or bar in Berlin and just say, “a beer, please” and you can be sure that whatever they bring you will be good. We’ve had more beer that week than we have in the past year. And we have no regrets.

“Berlin is not Germany. You will feel a different spirit here,” said Christian.

We kept hearing about the Berlin spirit during our week there. We felt it and enjoyed it, again and again.

Chef Tim Raue said, “Berlin is a vibrant city. You can do whatever you want, even if you go out nude with just a broccoli on your head, no one will bother you. You’re free to express yourself. That’s the reason creative people from all over the world come to live here.” 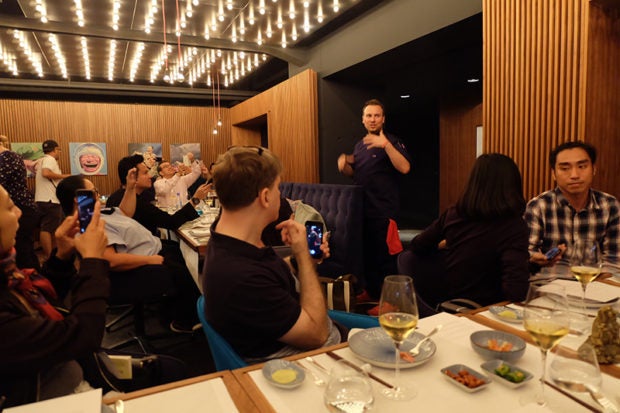 Berlin is many things. It’s an epic Michelin star meal at Tim Raue, it’s sausage that you buy from a man wearing his grill. It’s a wine glass that seemingly never goes empty, it’s bottles of beer you swig while crossing the street. It’s Turkish dishes that don’t stop coming, it’s a short rib sandwich you wish wouldn’t disappear. It’s three generations watching the World Cup together, it’s teens lugging around a case of beer on the train. It’s people napping on grass, it’s birds singing everywhere. It’s silly nicknames for buildings (the Haus der Kulturen der Welt really does look like a Pregnant Oyster), it’s a traffic light that has a story to tell. It’s pouring Berliner Luft down your throat outside a graffiti-covered späti, it’s a date with David Hasselhoff at 2 a.m.

And if there’s a perfect illustration of the Berlin sense of humor, it’s this: the David Hasselhoff Museum.

The Baywatch beefcake’s love affair with Berlin started when his song “Looking for Freedom” hit (and stayed on) the top of the German music charts in the summer of 1989, just before the Berlin Wall fell. He performed that same song in a New Year’s Eve concert at what was left of the wall weeks later. Since then, The Hoff and the once-divided city have been inextricably linked.

Maybe it’s that reason or maybe she just really liked Baywatch but Ally, a barkeeper at The Circus Hostel, decided to create the David Hasselhoff Museum at the hostel’s basement. Naturally, we wanted to see it. And we were going to have to do it alone because it was almost 2 a.m., on the last night of our trip and everyone else chose sleep over The Hoff.

For a quick second we thought The Circus Hostel’s locked door was going to come between us and David, but thanks to a beer-toting hostel guest, we managed to slip in. 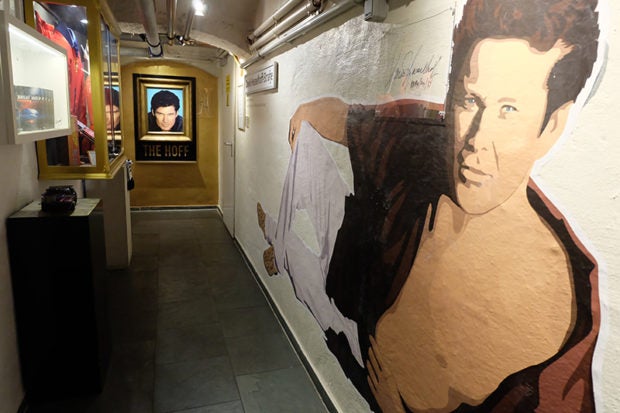 There they were: the mural of David, his image framed in gold, a display of Baywatch memorabilia, a Nightrider car and a petition to change the hostel’s street name to David-Hasselhoff-Strasse.

The Hoff actually visited the museum, which is really more like a shrine, in 2017 and said, “It’s better than Checkpoint Charlie.”

We couldn’t stop grinning. It was the perfect final Berlin adventure. For now.

Bernd said, “Do come back to Berlin, there’s always more to see.”

On the way home, Scoot’s Dreamliner lived up to its name. I was asleep for most of the flight, dreaming of chocolate-making and chicken wings, an upside down bar that used to be a brothel, a burger joint that was once a public bathroom, songs not yet sung and beautiful beards, of the many reasons to return to Berlin.