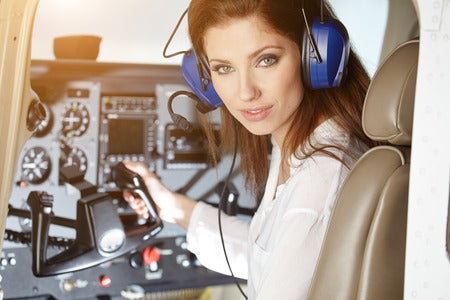 When a stricken Southwest Airlines jet was expertly landed after an emergency descent in April, saving 148 lives, it was a surprise to some that a woman was at the controls.

Role models remain few and far between for women wanting to enter the cockpit, rather than serve the onboard drinks, despite a huge shortage of pilots worldwide.

“So often we’re shown men as pilots, and women as cabin crew. This could be sending a message to young girls that if they want to work in aviation, it can’t be as a pilot,” according to the British Airline Pilots’ Association.

But things are finally starting to change and a few airlines are trying to redress the gender imbalance.

Europe’s biggest budget carrier easyJet, under an initiative named after pioneer aviator Amy Johnson, wants 20 percent of its new cadet pilots to be women by 2020.

The UN agency estimates that passenger numbers will double over the next 20 years, and that airlines will need to recruit 620,000 pilots to keep up with the demand.

Tammie Jo Shults is one of those few women.

Shults, one of the first female fighter pilots for the US Navy, performed heroics in safely bringing down her Southwest Boeing 737 after an engine blowout.

One passenger died in the incident.

According to retired captain Kathy McCullough, “having someone in the spotlight who’s a lady who does a great job just points out that it can happen and does happen and isn’t really that much of a surprise.”

Nevertheless, McCullough said after Shults hit the headlines that her generation of female pilots were still waiting to pass the baton to another.

“Until we reach a tipping point, which is supposedly 20 percent, I don’t think we’ll see much in the way of a change,” she told National Public Radio.

Neither does commercial flying lend itself to a work-family balance, giving organisations such as the ICAO and the International Society of Women Airline Pilots an uphill challenge to entice more women into the profession.

The society says just over 7,400 pilots flying for commercial airlines are female, or 5.2 percent of the global total.

It is not just employment practices that the International Society of Women Airline Pilots has to confront but passenger prejudices as well, according to former chairwoman Liz Jennings Clark.

A captain with Dutch low-cost carrier Transavia, 55-year-old Clark likes when possible to come out of the cockpit and say goodbye to her passengers at the end of a flight.

But she said that many still hand their litter to her, mistaking her for cabin crew.

Among both students and their parents, “there is a conscious or unconscious suppression” of the idea of women as aviators, she said.

About 15 percent of the student pilots at the French university are women. Double that figure are training as air traffic controllers, another sector suffering an acute shortage of entrants.

There has, at least, been some progress since 1979 when Shults, 56, was at high school and attended a careers lecture on aviation by a retired colonel.

The Southwest pilot said she was the only girl in the class, and he started by asking her if she was lost.

“I mustered up the courage to assure him I was not and that I was interested in flying,” she wrote in a book about female military aviators.

“He allowed me to stay, but assured me there were no professional women pilots.” CC