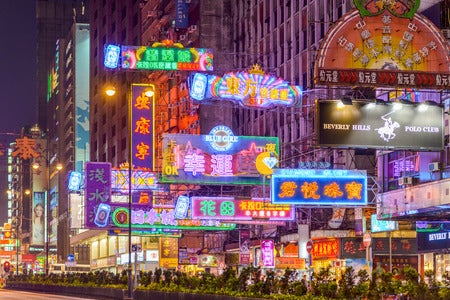 One man from Hong Kong has made it his mission to preserve the Beiwei Kaishu style of calligraphy. 82-year-old Yeung Kai used to make shop signs back in the day, where he only made use of a writing brush and ink as a means of living.

The Beiwei Kaishu was the chosen calligraphy style by many Hong Kong businesses for their signs back in the 1950s and 60s, eventually becoming the urban signature of Hong Kong’s cultural heritage as it transposed to neon signs. According to The South China Morning Post last July 21, the Beiwei style was favored thanks to its dynamism that conveyed power and stability. It became famous in Hong Kong after being popularized by Yeung’s mentor, the calligrapher Au Kin-kung in the 1930s.

Today, the industry of writing Beiwei signages is on its last breath. These days, many businesses have turned digital in creating shop signs. Yeung, too, has moved on from using writing brushes to simply printing scans of characters that he saved on old floppy disks.

“It took me more than two years to put a whole set of characters into the computer, which I bought in the 90s,” Yeung was quoted as saying. He is worried, however, of losing all of his work one day since his 20-year-old computer, too, is on its last breath.

Through the years, Yeung has built a loyal base of customers, around 30 furnishing and painting business that are just enough to allow him to continue making a living. Every day, he and his wife Chu Lai-ching, who is in her 70’s, journey 20 kilometers from their New Territories town to their tiny workshop just so Yeung can continue with his business.

But despite the disappearing art of Beiwei calligraphy and its aging maker, it seems not all hope is lost for the beloved style. Adonian Chan, a young graphic designer, has made it his undertaking to digitize the famous Beiwei characters into a typeface which can be used in any computer.

“I hope I can revive it through my design projects,” Chan was quoted as saying.

According to Chan, his graphic design firm, Trilingua, has started to use the digitized Beiwei typeface in numerous neon installations around town, becoming a remembrance of the unique calligraphy style of yore. Cody Cepeda/NVG