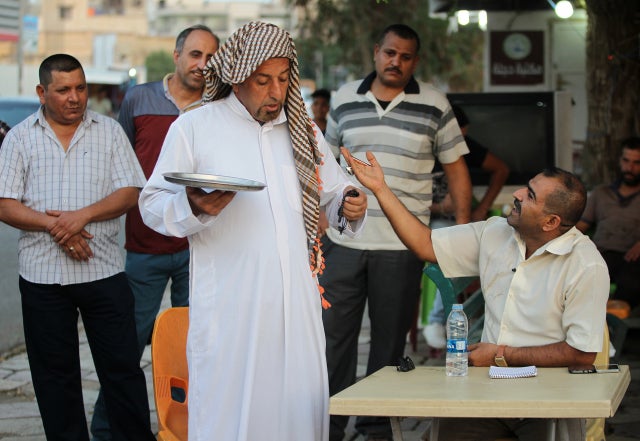 On a strip of pavement in the southern Iraqi city of Kut, a gaggle of amateur comedians pulls in the crowds every Friday — drawing chuckles, smiles and knowing nods. Image: AFP/Ahmad Al-Rubaye

On a strip of pavement in the southern Iraqi city of Kut, a gaggle of amateur comedians pulls in the crowds every Friday — drawing chuckles, smiles and knowing nods.

With a rich repertoire of skits, Khaled al-Atbi and his peers poke fun at politicians more interested in lining their pockets than rebuilding a country devastated by decades of war.

“Theater is a message,” said the 42-year-old al-Atbi, director and actor in the seven-strong troupe.

“With our satire, we condemn… corruption, lack of public services and tribal activities,” he said, citing those factors as central to discontent in Iraq.

Since the US-led ouster of dictator Saddam Hussein in 2003, Iraq has been plagued by graft and sectarian fighting, culminating in the Islamic State group seizing around a third of its territory in 2014.

As Iraq seeks to move beyond the brutal war that last year finally defeated the jihadists, al-Atbi is determined to embarrass officials who pocket bribes and hand out plum civil service jobs to relatives.

The father-of-two hopes his little troupe can help trigger a culture change, even as he juggles his satirical ventures with a full-time job as a policeman.

In one sketch, al-Atbi plays a diligent official obliged to work with incompetent but politically connected colleagues.

The scene did not require much in terms of props — just a table and a few chairs, which were quickly encircled by rapt onlookers.

“Our audience is very receptive because they know what we are enacting exists in reality,” said al-Atbi.

Less than two years after they began working the streets, the group’s efforts have already brought about change, according to Kut residents.

Where rubbish was once piled high, roads are now clean and refuse is collected regularly, Abu Ali added — thanks at least in part to pressure created by street plays.

But not everyone is a fan.

The group has attracted online trolls, and while street audiences are generally very supportive, hecklers make their presence felt.

“‘You exaggerate!’ ‘Stop insulting the parties and leaders!'” are common refrains, al-Atbi shrugged.

But the performers are not discouraged.

Once a week, they set up on “Tigris Culture Street”, among stalls of second-hand books lining the banks of the river running through the agricultural region.

The plays are the only “breath of air… for people of culture” in the area, said hairdresser Karim al-Bahadli.

“They express the feelings that are inside,” said al-Bahadli — a must, he believes, for a turbulent country that is ranked by Transparency International as the world’s 12th most corrupt.

Southern Iraq was the epicenter of protests in July against corruption and poor public services.

Iraq’s state human rights commission said Monday at least 14 people were killed in the demonstrations, which spread from Basra to Baghdad, before waning under pressure from the security services.

For fans of al-Atbi and his troupe, laughter is something of a social safety valve.

They scored their “greatest success” with a series of skits in the lead-up to May 12 elections, said troupe member Jalal al-Chati, who works as a reporter.

No shade of political sentiment escapes the group’s ridicule.

In one scene, the actors play two politicians — one a devout man offering voters access to the afterlife, the other promising to fend off government efforts to shut down shops selling alcohol.

To avoid sailing too close to the political wind, they use no names. But appreciative murmurs and giggles among the audience indicate they know exactly who is being mimicked. CC