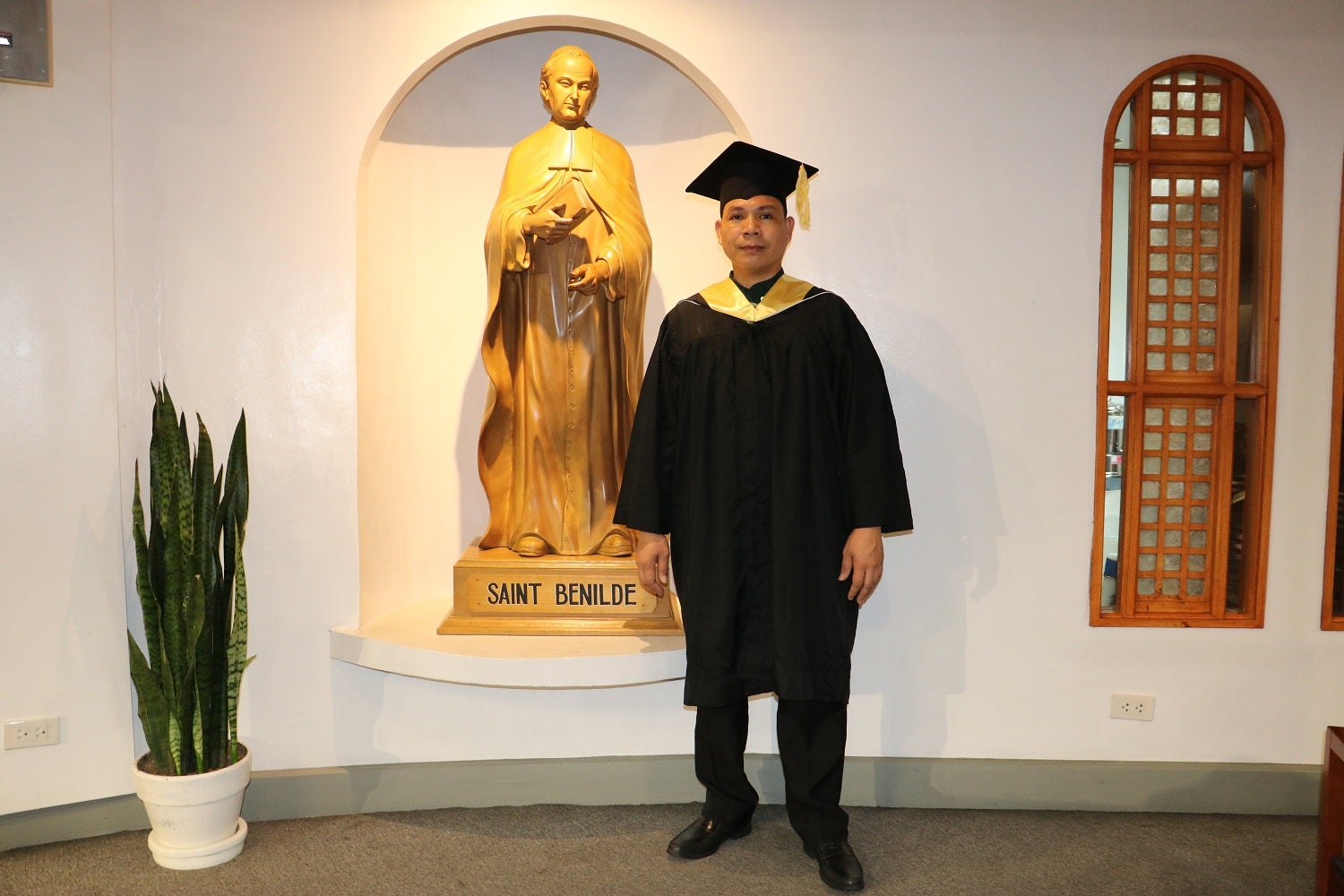 Emmanuel Ricalde as a graduate, a proud moment

Some years ago, the daughter of Emmanuel Ricalde asked him what he did for a living. “Janitor,” he proudly answered, and noticed how the six-year-old tried to hold back her tears. It broke his heart.

His daughter and son, who was only four then, had always believed he held a white-collar job just like the fathers of their playmates.

He knew it was difficult to make them understand that his job was nothing to be ashamed of. “Naawa ako sa sarili ko. Ganito pala kapag hindi ka maipagmamalaki ng anak mo (I pitied myself. So this is what it feels like when your child cannot be proud of you),” he said.

A high school graduate from Dagupan City, he genuinely wanted to go to college. His dreams were put on hold when he had to raise a family.

In 2014, Ricalde was assigned to the De La Salle-College of Saint Benilde (DLS-CSB). When he learned that the institution had scholarships for working students, he applied immediately. After 18 years out of school, Ricalde was back in class.

He was then 34, his excitement dampened by the discovery that he was among the oldest in a class made up mostly of teens and young adults.

His situation was daunting but he quickly adapted to his environment and tried to get along with his classmates.

Ricalde would wake up past midnight to prepare his baon of home-cooked rice meals. He’d start his commute at 3 a.m. so he could be on time for the briefing at 4:45 a.m., then work until 2 p.m. He’d take a break, then do his homework, and be in class from 6 to 9 p.m.

After a long commute, he would be home just before midnight, and do home chores.

A janitor by day and struggling scholar by night, Ricalde didn’t have enough time to be with his family. “Aalis ako tulog sila, pag-uwi ko tulog na ulit (They would still be asleep whenever I left the house, and they would already be asleep when I got home).”

The working student would photocopy notes and place them in his uniform’s pocket so he could go over them during breaks.

He knew he had to do his best. “Kulang man sa tulog, tuloy pa rin ang laban (Though lacking in sleep, I kept up with the fight),” he said.

Ricalde’s wife, Maricar, with their two children, soon had to move back to her hometown in Bacolod to look after her ailing mother. In this temporary separation, he faced another uphill battle—to fight loneliness after a long, tiring day.

Then he met another working student, Karl, 27, who would become his thesis partner and best friend.

Despite their age difference, the younger Karl served like his older brother in school, who was kind enough to ask if Ricalde had enough money for food, and who would shoulder much of the thesis costs.

The two shared dreams: to graduate and eventually provide better lives for their families.

However, as they were about to finish their thesis, Karl was diagnosed with a terminal illness. Days before the submission of their paper, Karl died.

Ricalde, only months before graduation, lost not just a thesis partner, but also a source of strength.

It took him quite some time to get over the loss and to be back on his feet.

Finally, on June 30, 2018, Maricar watched her husband walk up the stage of Philippine International Convention Center and receive a hard-earned Bachelor of Science in Business Administration diploma, major in Business Management.

Right after graduation, the couple rushed home for a much-awaited reunion with their children.

He looks forward to find an office job and perhaps save enough to start his own agricultural business.

“’Yung pangarap mo, wag mo iwawala. Lagi mong isipin na may pag-asa at kapag hawak at nasa kamay mo na ang opportunity, pag-ingatan mo na ’yan (Do not let go of your dreams. Always keep in mind that there is hope, and once you have grasped the opportunity, take care of it),” he said.

He believes that intelligence alone does not assure a road to success. Patience, diligence and perseverance help achieve one’s goals.

Ricalde, the days spent with brooms, mops and detergents still vivid in his mind, will never forget how being a janitor at CSB gave him an opportunity to turn his life around and give his family a shot at a better future.