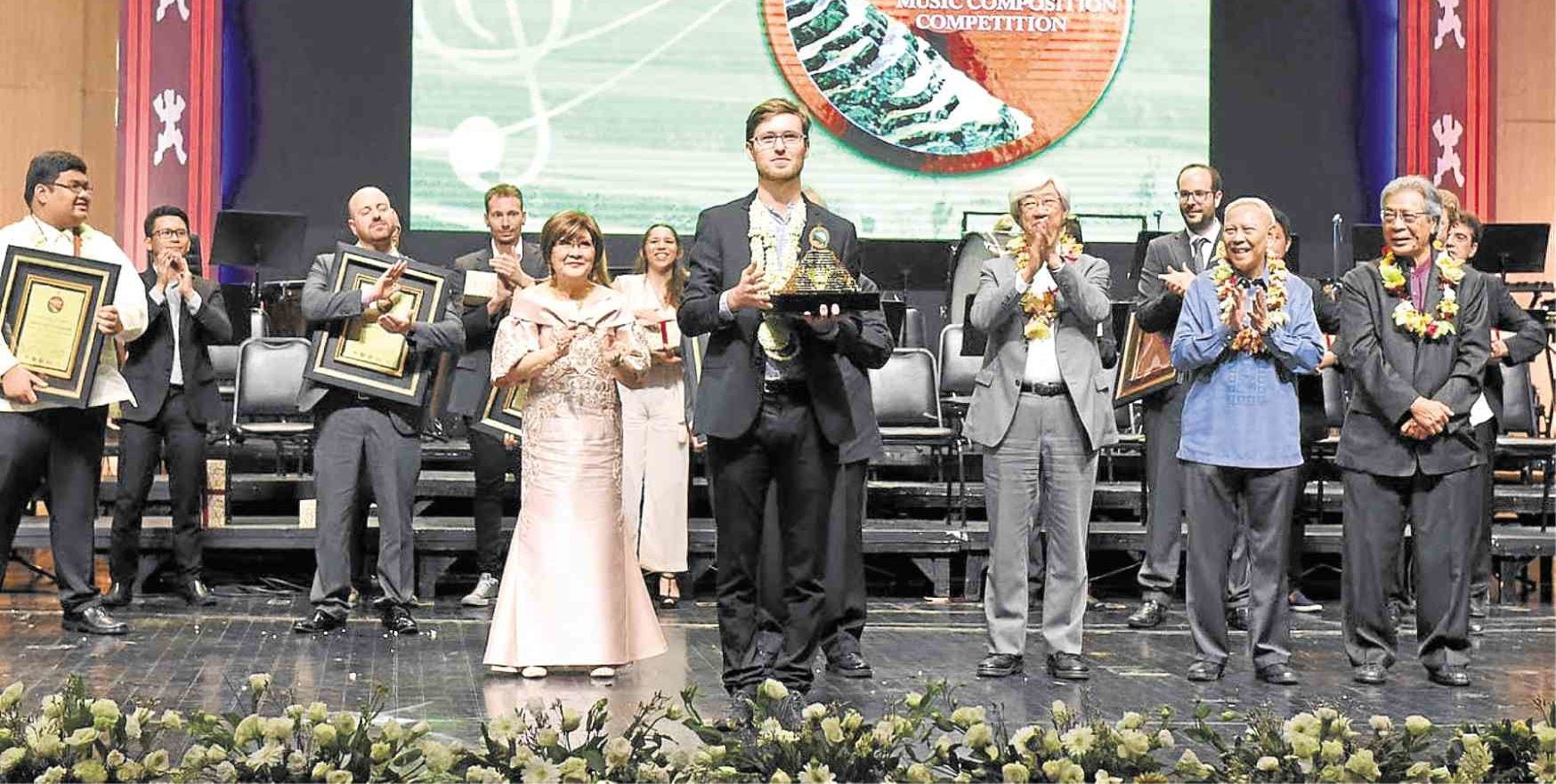 Leon Firšt of Slovenia (center) receives the grand prize to the applause of Ong-How (fifth from left) and jurors (from right) Ung, Santos and Matsushita.

The contest was organized and funded by Universal Harvesters Inc. to raise awareness on the need to restore and conserve the Philippine Rice Terraces in the Cordilleras, inscribed in the United Nations Educational, Scientific and Cultural Organization’s (Unesco) World Heritage List.

BIMCC was also organized under the auspices of the Municipality of Banaue, Banaue Rice Terraces Restoration Project and Tofarm Search and Award.

Firšt’s composition, “The Story of Ifugao,” was announced the grand winner during the finals ceremonies at Cultural Center of the Philippines (CCP) last July 26, when the compositions of the 10 finalists were performed by the Tofarm Festival Orchestra under the baton of Josefino “Chino” Toledo.

The 10 finalists were shortlisted from a semifinals list of 20 composer-fellows from 10 countries including the Philippines. A total of 84 entries from all over the world were submitted.

Thunderous applause greeted the announcement of Firšt’s triumph by professor and composer Ricardo Lorenz of Michigan State University, chair of the international board of jurors.

Other jurors were Cambodian-American composer Chinary Ung of the University of San Diego in California; Isao Matsushita, president of Japan Federation of Composers and vice president of Tokyo University of the Arts; and National Artist for Music Ramon Santos.

Winners received their prizes from Milagros Ong-How, president and CEO of Universal Harvesters and chair of the Banaue Rice Terraces Restoration Project.

In her remarks, Ong-How said the Philippine terraces are “masterpieces that move in sync with the spirit of the Divine Composer.” She said this was the “reason why the essence of this place, the landmark and its people should be emulated, enshrined and immortalized in the art form that best represents it: music.”

At the press con held at Hotel Jen Manila before the CCP ceremonies, the finalists expressed varied reasons for joining the competition, from the personal to the artistic. Everyone expressed gratitude for the opportunity to see the Philippine terraces and immerse themselves in the communities surrounding them.

“I want to showcase in my work the simplicity of life in Banaue,” said Firšt. Its restoration “affects huge facets in the lives” of the people around it.

Firšt said his composition was based on Ifugao’s sociocultural and religious traditions, and the rice terraces themselves. It sought inspiration from the narrative chants of the Hudhud, that mark important occasions of the Ifugao’s life from the cradle to the grave, including planting, harvesting and other socioreligious rituals and festivities.