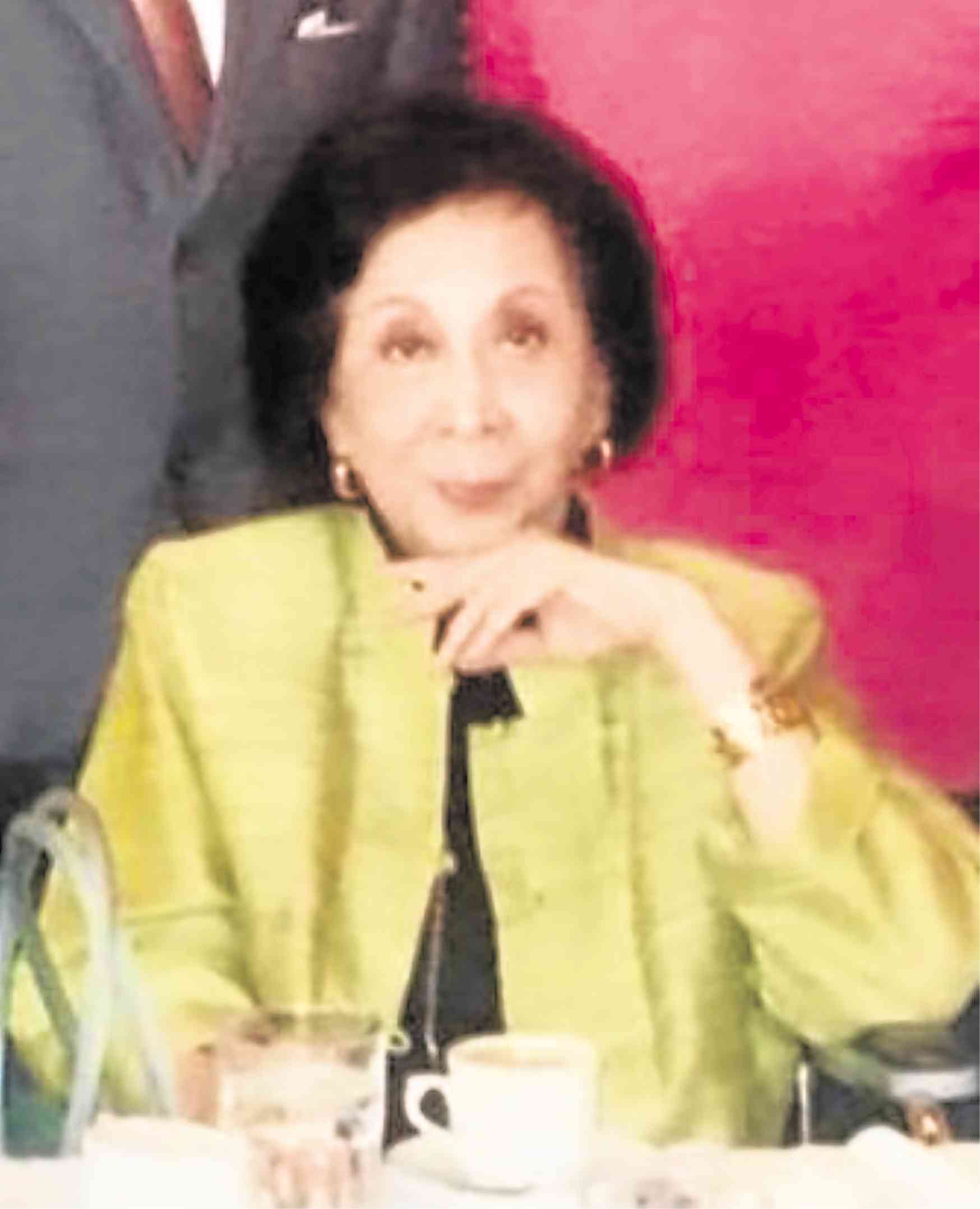 Carmen Guerrero Nakpil went quietly on July 30 at 1:30 a.m. It might seem death sneaked up on her, as they say, like a thief in the night. But that’s hard to imagine. She allowed nothing to happen to her other than on her own terms, and that was how it was: She died in her own bed, in her own home, and, there’s good reason to suspect, in her own time. She bothered no one as she went.

I was told that, going by her blood works, she could have gone on and on, but, at 96, she must have thought, even with her indomitable spirit, that it was time. I can almost hear her saying in imperial Spanish, “¡Basta ya!”

Chitang spoke fluent Spanish and toward the end, I’m told, spoke nothing else. This, some say, although pleading not to be asked to explain, was a sign the end was near.

I have heard the same story about other people. My own dad, who went at 91, spoke Spanish, too, the language of his youth, in his dying days.

Another death sign is seeing loved ones who have themselves passed on. Chitang’s daughter, Gemma, said that, whenever she visited her and caught her awake, her mother would call out to her, “Mama!”

When I learned Chitang was more often asleep than awake, I told Gemma about a psychologist who had a gift of tapping into the consciousness of people in her condition, even those in a coma. She said they had already brought a priest with such a gift. I asked her how successful the priest was, how sure she was it was her mom’s consciousness communicating. She looked at me with her Miss International eyes and said something like, “It was Mommy all right. Naughty and witty as only she could be. The poor priest was almost embarrassed to convey her irreverent message.”

I had always been a fan of Chitang’s writing since I was at St. Theresa’s College, her own alma mater. I looked forward to her columns as did the nuns who were probably wary of what she’d say next, but proud of her at heart.

Cielo Lutz, a classmate of mine who had just launched her memoir, texted from her home in Lancaster, Philadelphia. “CGN was a model/idol of every Theresian aspiring to be a writer. An alumnus who followed the Theresian motto: Let your light shine and be the best of whatever you are!”

For more than half my life, I called her Tita (for aunt) Chitang; older cousin Morita, who was my mom’s age, was married to Chitang’s older brother, Dr. Mario Guerrero, who happened to be a contemporary and classmate of my dad at the Ateneo. The Cruzes and their Rizal relatives were close family friends of my Roces grandparents, too. In fact, I grew up calling her Cruz sisters-in-law Caring and Peng “Tita,” except Hilda, who is close to my age.

It took a while for me to be comfortable dropping that form of address for Chitang. It had to go, anyway, when Gia, my oldest child and only daughter, married Luijo Nakpil, her youngest son. Close friends for generations, the Roceses and the Guerreros had intermarried again.

I began to get to know Chitang better as we went about preparing for the wedding. She was as proper as she was considerate. The Spanish word cumplida describes best how she went about our relationship. Whenever I sent her a gift for her birthday, she picked up the phone to thank me, losing no time. She was always funny but also always correct in behavior, which gave me a sense of comfort, security and confidence in our relationship.

Being around her was like being around Uncle Marcos Vidal Roces, the ultimate gentleman, who happened to be a very close friend and relative of hers. He was a favorite uncle and me expressly a favorite niece. It was, therefore, a painfully huge faux pas on both our parts to have presumed he would be on the other’s guest list for our children’s wedding; he was not.

It could have been her first disappointment with me. Tito Marcos being family, the greater responsibility was naturally mine. In any case, Chitang was too big a person to even be slightly bothered by it.

At another time, Chitang could have held a grudge against my husband, Vergel. As executive editor of The Manila Times, the newly revived Roces paper, he disagreed, prevailing over the owners, to have Chitang write a column for it, so soon after the ouster of the dictator Ferdinand Marcos, with whom she was closely identified. Marcos had killed the Times, and jailed and persecuted its publisher, Chino Roces.

One day, with Vergel, I bumped into Chitang at Schwarzwalder restaurant where now the Ayala Museum stands. I felt awkward at first, but she broke the ice and addressed Vergel directly, “I read you all the time.”

For Vergel, it was more than he had expected or hoped for, and he needn’t say then, and or now, that, notwithstanding their differences, he has never stopped admiring her writing.

We since joined her often at  lunches at Havana at Greenbelt Wednesdays. Since around a couple of years ago, she stopped coming and was heard to lament, “My friends are either dead or deaf.”

Marivic Rufino somehow kept the lunches going with great hopes for her return. Always elegantly dressed and well-groomed, an imposing and lifting presence, witty and instructive and so welcoming, Chitang was sorely missed.

When her much awaited three-volume memoir was published, it automatically took its place in the histories, both personal and national. Who else could have given us such insider perspective on life and culture? I can’t help but wish she had written more.

“So tidy, so subtle, so elegant,” says Vergel of her writing. Not yet done, he adds, “There’s a distinct flavor of culture in it. She should be required reading. And there’s no excuse for her going unread: She is a compelling writer!”