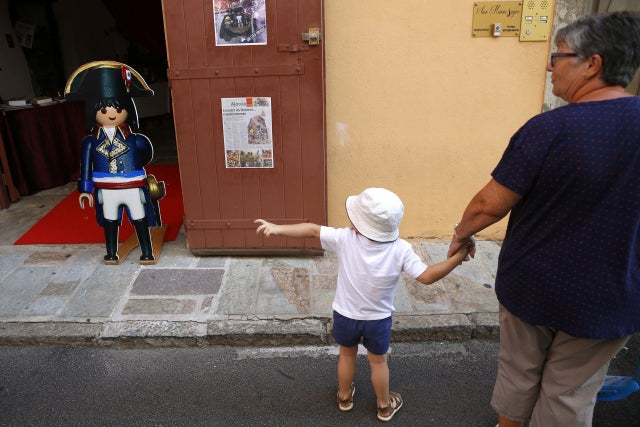 Tucked away on a side street near the Corsican home where Napoleon Bonaparte was born, a mini-museum invites young minds to relive the French emperor’s story through scenes painstakingly built from hundreds of Playmobil figurines.

Frederic Pierrot, a 53-year-old IT entrepreneur, came up with the idea a few years ago as a way to pay homage to the Mediterranean island’s most famous son while “rediscovering the historical reconstructions I did when I was 10 years old”.

“I wanted an original idea, far from all the digital technology offerings,” he said, of his Naporama museum in the island’s capital, Ajaccio.

Using pieces from his vast Playmobil collection, he began customizing the figurines with paper, raffia and even handmade accessories to create historically accurate scenes and characters.

For 20 euros ($23) fans can buy their own made-to-order Napoleon or his wife Josephine.

Giving guided tours, Pierrot sharpens his visitors’ curiosity with little-known anecdotes while sketching out the events which changed the course of history.

“When he was 13 years old, Napoleon organized a snowball fight which lasted three days at the Brienne military school” in northeast France, he said, during a recent visit.

“For historians, these days already gave a hint of the future chief’s character.”

Next up are reconstructions, beginning with the 1793 Siege of Toulon, where the young general showed his strategic flair and ending with his crowning as emperor in 1804.

The tone is unabashedly upbeat — there is no reproduction of his disastrous final defeat at Waterloo, for instance — with tales of courage, friendship and a bit of coquetry.

“It’s funny when we see (Emmanuel) Macron and his wife today,” Pierrot says, referring to the age difference between the French president and his wife, Brigitte, 25 years his senior.

“But for their civil wedding, Josephine de Beauharnais declared herself five years younger than her real age, while Napoleon made himself older so they could hide their (six-year) age difference.”

The episode leads to the tale of Napoleon’s coronation when a rushed church wedding had to be arranged after Josephine informed the pope that they were not yet married in the eyes of God.

Napoleon was so annoyed that he made sure only civil weddings had any legal foundation in French law when he laid out what would become known as the Napoleonic Code.

Pierrot also has another trick to keep visitors on their toes. Hidden among the Playmobil models are characters who don’t belong: Harry Potter, Yoda, Sherlock Holmes, a Pokemon…

“All right kids, learn how to keep your eyes peeled,” he tells them.

“That’s what I liked best,” says Maxence, a seven-year-old from the French city of St. Etienne visiting his grandmother.

Madeleine, a 13-year-old who spends each summer in Corsica, has visited dozens of times and has even given Pierrot her old Playmobil figures so that he can build new scenes.

And it’s not only young people who emerge from the visit as enthusiastic fans.

“I did the same, creating my own little battles when I was young — this is better, of course, because he makes stuff himself,” he said.

And when Robert Dabrowski, originally from Poland but living in Britain, visited with his wife and children, Pierrot gave his 20-minute tour in English.

“For the children, it was good to present this story this way. Toys are involved so they are a little bit more involved too, rather than with dry history,” Dabrowski said.

Entry to the museum, which opened in July 2016, costs three euros for visitors 10 and older, helping to offset the 10,000 euros invested by Pierrot.

“Playmobil has approved my project but they don’t finance it,” he said. NVG