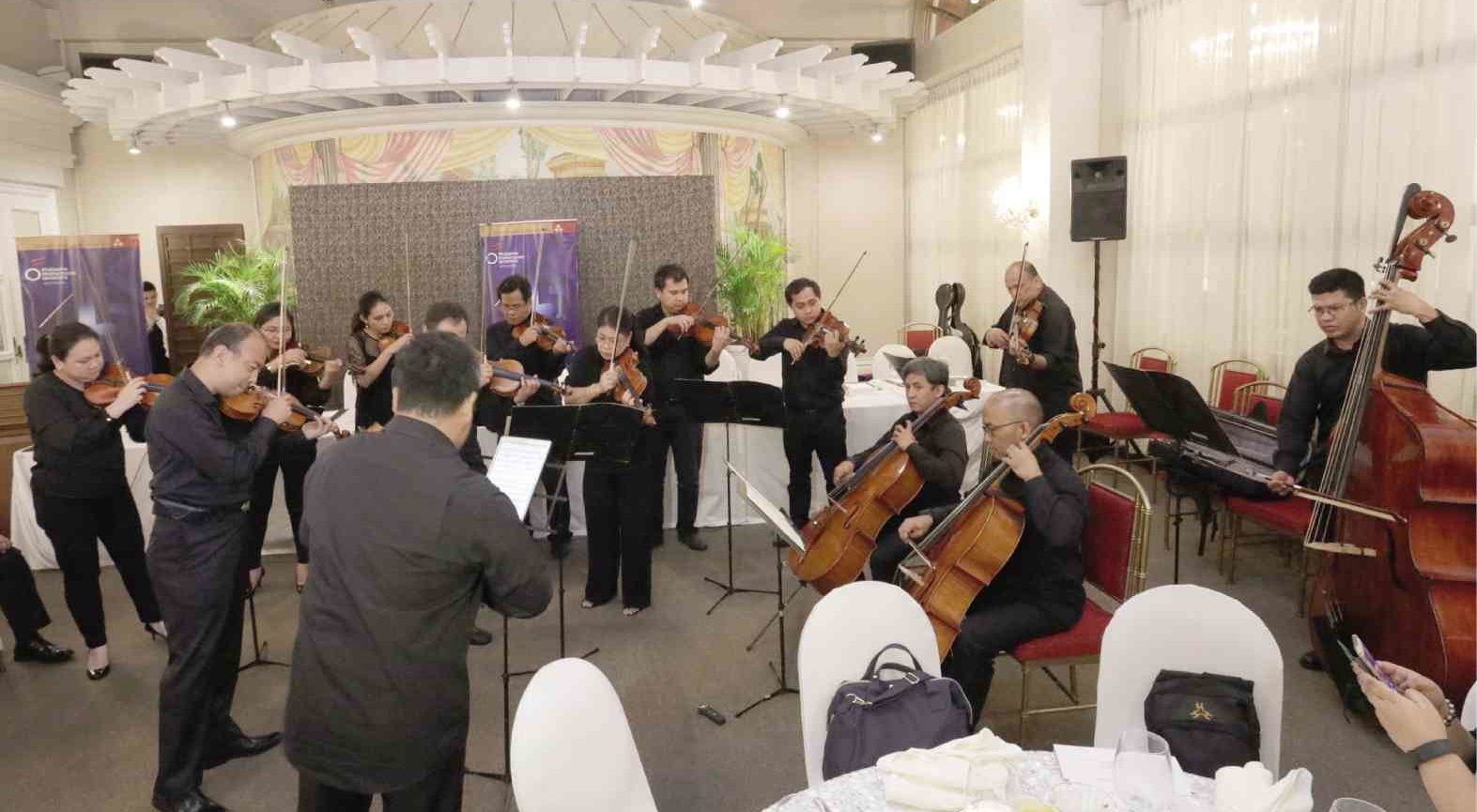 The Philippine Philharmonic Orchestra (PPO) will mark its 45th founding anniversary this year with the usual program that features foreign classical musicians and a mix of tours both foreign and local, the latter through a reinvigorated outreach program, according to Cultural Center of the Philippines (CCP) president Arsenio Lizaso.

Since “music is for everybody,” Lizaso said CCP was going to pursue a “vigorous outreach program,” in keeping with the PPO’s mandate to bring classical music to the grassroots.

During the press conference at the Manila Hotel, a contract signing was held by the CCP, partner institutions, and local government units that would host PPO’s outreach concerts.

Founded on May 15, 1973 by Imelda R. Marcos, PPO was named originally CCP Philharmonic Orchestra; its main task was to provide assistance in musical concerts. Luis Valencia was its first principal conductor and music director, and violinist Julian Quirit its concertmaster.

In 1979, Oscar Yatco was instructed by Marcos to reorganize it and in 1982, it was renamed the Philippine Philharmonic Orchestra with Yatco as its principal conductor. Its vision was to become a world-class symphony orchestra.

PPO has since been a resident company of the CCP, and performs in a concert season consisting of eight concerts from September to April.

Since then, CCP Philharmonic has become a “living national treasure and legacy,” Lizaso said. It has performed in in Europe, United States, China and in October this year, it will perform in Japan.

During the press conference, CCP artistic director Chris Millado read the prepared statement of PPO principal conductor and music director,Yoshikazu Fukumura, who had skipped the press con to go back to Japan to attend to his ailing wife.

In his message, Fukumura said he was happy to note that “professionalism” had taken root among the PPO’s musician since he took over two years ago as conductor.

Fukumura added that he would make PPO’s slated trip to Tokyo, Japan, this October a veritable “take-off.”

For the 45th anniversary, Fukumura promised a concert season program “of great variety.”

The season, according to Millado, will open on Sept. 14 with award-winning French pianist Monique Duphil as soloist.

After an absence of two years, Japanese violinist Ryu Goto returns to Manila and performs on Nov. 15 with the PPO at the Manila Cathedral at 8 p.m.

The program, with Fukumura as conductor, includes A. Vivaldi’s The Four Seasons where Ryu Goto plays the solo for violin at the same time conduct the orchestra. A. Dvorak’s Symphony no. 8, op. 88, G major completes the program.

Ryu Goto has established himself as a significant voice in classical music, with a growing following in Asia, North America and Europe.

Filipino violinist Joaquin Gutierrez performs on Dec. 14 with the PPO under the baton of Herminigildo Ranera.

Gutierrez made his orchestral debut at 10, playing Lalo’s Symphonie Espagnole with the Metro Manila Community Orchestra under Josefino Toledo. He has also performed with the Manila Philharmonic Orchestra, Moscovia String Orchestra under Oscar Yatco, Francisco Feliciano, Eduard Grach. He has given solo performances in Germany, Austria, Czech Republic, Israel and Singapore.

Welcoming the New Year is Philippines-born Hiyas Hila on Jan. 18, 2019 when she performs with the PPO under the baton of Yoshikazu Fukumura.

The program consists of F. Mendelssohn’s Symphony no. 4, Op.90, in A major (“Italian”), M. Castelnuovo-Tedesco’s Guitar Concerto no.1 and I. Stravinsky’s The Rite of Spring.

Shomura’s concerts cover a wide range of musical styles. In addition to solo recitals and performances with Japan’s major orchestras, he often collaborates with his colleagues to perform duo and trio concerts, with various instruments such as flute, voice, piano, violin and mandolin. He continues today to commission and premier works by Japanese composers, playing an important role in expanding the guitar repertoire. Shomura records for the Toshiba EMI Label.

Outside of the CCP, PPO will perform at University of Baguio on Aug. 3, and will hold master classes in that university and in St. Louis University.

On Aug. 29, PPO will perform in Malolos, Bulacan, in partnership with the city government.

On Nov. 23-24, PPO will go to Davao City for performances at University of Southeastern Philippines.

On Dec. 9, PPO will perform in University of the Philippies in Quezon City.
On Dec. 20, it will perform in Nueva Ecija in a concert co-organized with Muñoz City and Mayor Nestor Alvarez.

And on Dec. 29, PPO will perform in Bacolod City’s SMX Convention Center and at City Hall. Bacolod Mayor Evelio Leonardia is partner. –CONTRIBUTED