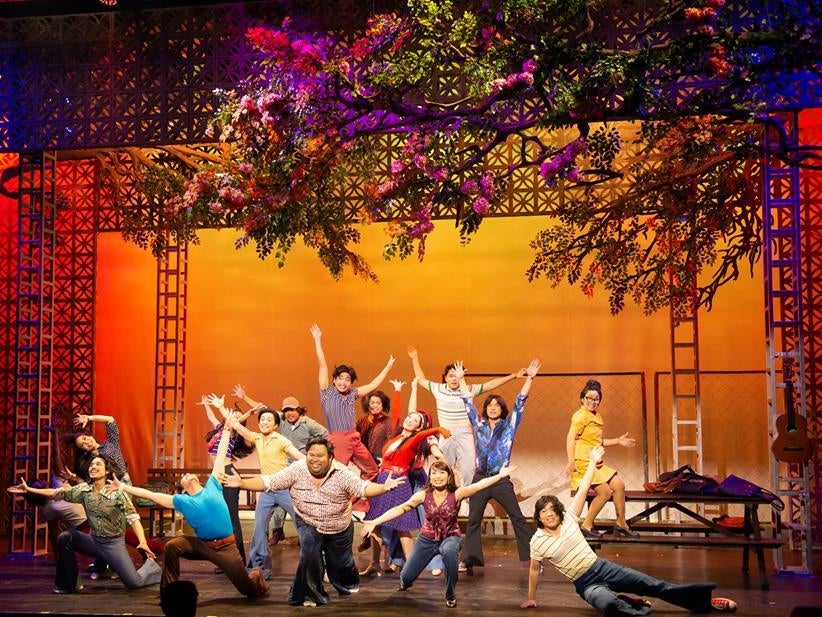 One of the toughest challenges in mounting an original musical production based on a repertoire of pop classics is preventing the show from becoming a concert, where the plot and characterization play second fiddle to the renditions of the hit songs.

9 Works Theatrical and Globe Live’s “Eto Na! Musikal nAPO!”—ongoing till Aug. 26, at Maybank Performing Arts Theater, Bonifacio Global City (BGC)—successfully surmounts this hurdle. It embraces its musical roots by thoroughly reimagining the wide discography of the Apo Hiking Society, even as it invites its audience to relive a more innocent age—with a few occasional winks at the present.

Spoilers aside, it’s worth noting how a smart, dramatic sleight-of-hand at the end reveals the heart of the musical, and wordlessly explains why the Apo’s enduring music continues to resonate with generations of Filipino music enthusiasts.

The simple plot happens within the span of a school year, with seven protagonists stumbling their way to competing in a songwriting contest. The 1975 setting is an obvious nod to the beginnings of Danny Javier, Jim Paredes, Boboy Garovillo and their pals. The musical’s cast of characters, middle-class kids studying in a Catholic university, live sheltered lives. In Act 1, failing grades, unrequited love, parental disapproval and romantic entanglements are the only things they lose sleep over.

But the timeless music, given more upbeat arrangements by Daniel Bartolome and Orly dela Cruz, as well as the book written by director Robbie Guevara, make this story far from simplistic. There is an organic, unpretentious feel to how each Apo tune is introduced into scenes and situations.

While every member of the audience, regardless of age, can identify with the proceedings, the more mature among them—especially those who’ve grown up with the Apo—will revel in seeing a mirror of their youth.

Guevara and costory writer Jonjon Martin, who probably were in their early childhood years during the Apo’s heyday, did solid research on the period. Their innumerable references to the icons, habits and symbols of the martial law years ring true. And once they take these tropes and twist them to thumb a fond nose at how things have changed 30 years later, the peals of laughter from the audience are irresistible.

The cast is excellent, marked not only by energy and sincerity, but also by a sense of jubilation. PJ Rebullida’s choreography also helps keep the pace quick and lively. With minimal lighting and props, a detailed eye for period wardrobe, and the perpetual use of student crowds surrounding the protagonists, Guevara’s direction reminds us that this is a youngsters’ world, the adults (stern parents, friendly if strict priests and principals) confined to the background.

Hard as it is to believe, the Apo, now recognized as a Filipino music institution, started out as a teenybopper group whose initial audiences were screaming colegialas (think boy band in the ’70s). The first act lays this out, with three couples at the forefront of the story: workaholic Rick (Mark Bautista) and his neglected girlfriend Anna (Rita Daniela); playboy Butch (Jobim Javier) and Michelle (Sab José), the one girl who wins his heart; and the sentimental Sonny (Alfritz Blanche) and the equally childlike Jane (Marika Sasaki).

Without breaking its stride or deviating from the tone, the second act becomes a coming-of-age for these characters, as the darker reality of a society in turmoil impinges on their lives. Guevara lets this darkness hover over the consciousness of the protagonists and the audience.

The glass world does not shatter totally, but enough shards are broken to make each confrontation a painful learning experience.

This growth would prefigure the Apo’s fight against the Marcos dictatorship at the height of the group’s career, when it had everything to lose. That evocative play on the Apo name was actually a gauntlet hurled at the regime: “nAPOsila” was a quip at the “Pusila” word uttered by the alleged killers of former Sen. Benigno Aquino Jr., moments before he was gunned down at the Manila International Airport tarmac in 1983. Although the syllable now sounds like a funny sound bite, using it loudly and consistently in the post-Aquino assassination years made Javier, Paredes and Garovillo among the most prominent artists critical of the dictatorship.

That bit of history, though precious, is not a requisite to appreciate the bolt of joy that “Eto Na! Musikal nAPO!” is. The musical is a celebration of friendship that has stood firm through the years and given birth to a cornerstone legacy in Original Pilipino Music.

The finale pulls out all the stops to make this point—a closing scene that pays homage not just to the emergence of a trailblazing new sound in local music, but also to the awakening of a social and national consciousness that would make this gangly group of friends the iconic, indispensable artists they would become.