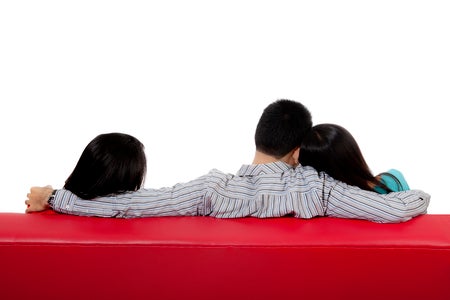 Husband is cheating with gym instructor

My husband and I have been married 30 years now. Recently, I discovered he was having an affair with his gym instructor.

We go to separate gyms and I just let him have his “me” time, which lasts three to four hours on any given day. This is where he gets to fool around with other girls like the one I recently discovered.

He denied it, but further proof surfaced. While he was playing online poker, I got hold of his phone and saw several incriminating sex videos. His face is not actually visible, but being together for 30 years, I know every mole and mark on his body, and his voice.

This triggered lots of fights between us. He said he gave in to peer pressure for his actions. He threatened to leave me or commit suicide because of the distress of confessing to this affair.

The woman is now working abroad as a dancer and their communication via video calls and Viber are still ongoing despite his protests.

It has been only a few months and I doubt the sincerity of his promises to end the affair and move on with our lives.

Your husband is having an emotional midlife crisis, or is just being self-indulgent. If what you’re saying seriously happened, then he is experiencing exploding hormones that’s turning him into a lusty teenager again.

And, there’s nothing you can do about it.

Unless you weather it and allow him to exhaust whatever it is he is venting, you may still save this 30-year marriage without flushing it down the sewer with your constant fighting and his threats of separation and suicide.

He is bored, he’s finding himself attractive again to young women and he’s probably feeling such a high, that as far as he’s concerned, he couldn’t care less about anybody or anything—including hurting you and feigning ignorance at being caught on video.

If you have no plans of putting this marriage out to pasture, give him a long leash and allow him to wallow in the mud for as much as he wants. You cannot be a constant watchdog looking out for texts and his other shenanigans and make yourself sick with his puerile behavior.

In hindsight, you should have joined him in his gym to have avoided this problem. Too late now.

Just tolerate him in the meantime and desist from rocking the boat too much. He himself probably will not want to leave a relationship of 30 years. Men love their homes.

But his wanting to remain a mindless boy is not so easy for you to accept, as well. Make him see your worth and recognize what he will be losing should your cup start to overflow with pain, and visualize his life alone—without you.