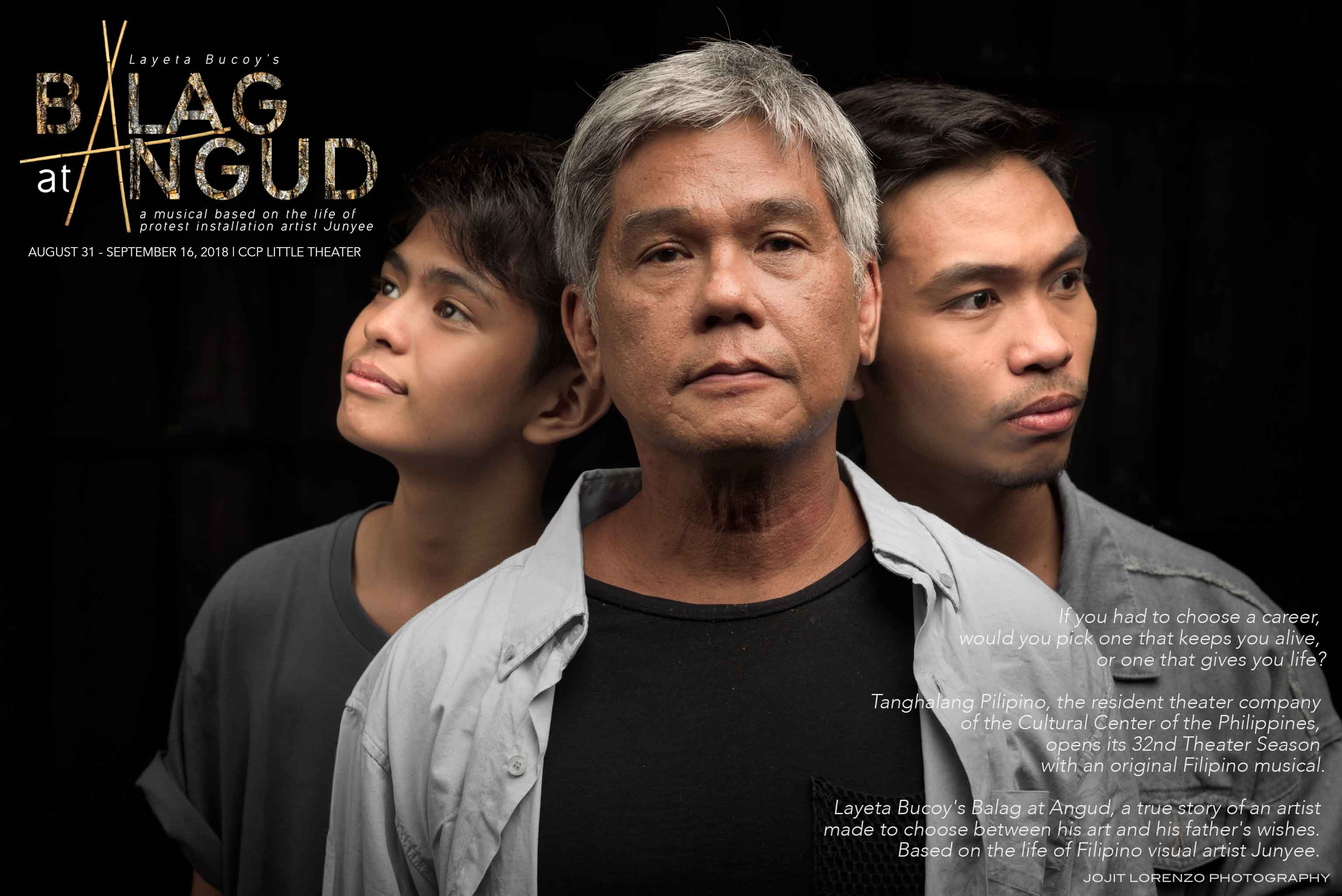 When Luis Yee Jr. (later known as Junyee), an award-winning sculptor and installation artist, was young, he created a set of wooden cubicles that became taller and taller, and showed him being trapped inside. But in the last cubicle, he emerged naked and therefore “free.”

Little did the artist know that, decades later, this innovative work would be the inspiration for a poster showing a young actor (Paw Castillo) in a similar situation, in the nude, though mercifully from behind.

The poster announced the start of the 32nd theater season of Tanghalang Pilipino, the resident drama group of the Cultural Center of the Philippines (CCP). The new play in question, a musical, is based on the tumultuous life of Junyee, a protest artist known for his stand against the destruction of the environment, poverty, corruption, and the greed of corporations and cronies.

“Balag at Angud” is by Layeta Bucoy, with music composed and arranged by Dodjie Fernandez and Upeng Fernandez. Direction is by Audie Gemora, and set design is by Toym Imao.

Playing important roles are Rody Vera as “old” or present-day Junyee, Paw Castillo as the young Junyee, and DM Garcia as the child Junyee. Bayang Barrios is the Muse.

Even the late National Artist Napoleon Abueva is a character in “Balag at Angud,” to be played by Noe Morgado. Junyee was a scholar of the famous sculptor.

The play’s title comes from one of Junyee’s works, balag being a trellis structure made from bamboo bound firmly by ropes or strings where vines grow, while angud is that part of the tree trunk where holes are drilled in order to haul logs from the mountains. Junyee’s installation was displayed at the University of the Philippines Diliman where students could pass underneath and tie objects or messages of protest and of love.

In one of his sculptures, Junyee incorporated protest materials against the Marcos dictatorship. Another of his well-known works, created in front of the CCP, involved thousands of remnants of trees destroyed by illegal loggers.

Junyee grew up in Agusan del Norte and came into conflict with his father, who considered his son’s art “garbage.” So Junyee left home, fended for himself, became a makeup artist in a funeral parlor, lived in the slums and created artworks that did not sell. The father, Luis Yee Sr., will be played by Jonathan Tadioan.

“It’s hard to explain installation art,” the artist himself said. “I’ve been in installation since the 1960s and was a recluse at UP Los Baños for years. I’m used to working alone, I always work alone.”

Imao, himself a noted artist, said of his set design: “The set is essential to the production. It takes inspiration from Junyee’s actual installation, reinterpreting them using materials like bamboo, leaves and seeds.”

For Bucoy, the play is about celebrating the courage and vision of the artist. “‘Balag at Angud’ centers on an artist’s struggle to keep his faith in the power of his art despite perceptions that it is powerless and useless.”