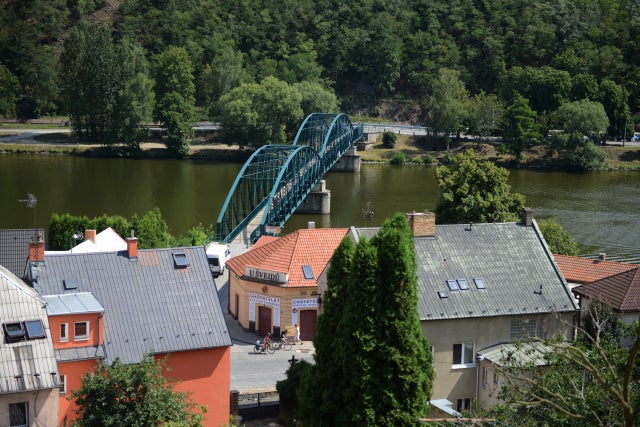 A photo taken on July 15, 2018 shows a view of the old bridge over the Sazava river in the Czech village of Davle, located 25km far from the capital Prague.Propaganda-fuelled Soviet soldiers were ready to take on American and German armies during their 1968 invasion of former Czechoslovakia -- before they realised they were facing filmmakers. Image: AFP

Propaganda-fueled Soviet soldiers were ready to take on American and German armies during the 1968 invasion of former Czechoslovakia — before they realized the “enemies” were filmmakers.

“I remember the noise made by a tank unit on August 21, 1968,” said Kvetoslava Dufkova, a pensioner from the small town of Davle just south of Prague, who was 14 at the time.

“The Soviets then arrived in the center of Davle and there they came across, to their big surprise, an army they thought was German,” she told AFP.

Like many locals, Dufkova had been acting as an extra in “The Bridge at Remagen”, a John Guillermin war film starring George Segal and Robert Vaughn that was shot in Davle.

“The guys in the tanks were stunned to suddenly see ‘a German army’ in front of them. They began negotiations, which lasted several hours,” Dufkova said of the alarming moment that took place 50 years ago.

After some time, the invading troops understood they were facing actors and not the expected imperialist cutthroats.

Beginning in March 1968, Davle was transformed into a movie set, with residents mingling with Hollywood stars in American and Nazi military uniforms while tanks and other army vehicles drove by.

It was also surrounded by replica buildings imitating those in Remagen, a town in western Germany.

“Near our house, there was a pile of dead soldier mannequins that the filmmakers would distribute here and there during filming,” said Antonin Dvorak, a 78-year-old pensioner from Davle.

The film tells the story of how the US army took hold of the last bridge still standing across the Rhine in March 1945, following the German army’s failure to destroy it while waiting for the retreating Nazi troops to cross the river.

United Artists producers took advantage of a political thaw in what was then communist Czechoslovakia to go on location there as the 1968 Prague Spring movement opened the country up to the West.

Producers picked Davle because of the resemblance of a local bridge to the one at Remagen, as well as the presence of skilled film staff, including stunt performers and prop men.

“During the shooting of a scene in which the bridge is bombed, a horse fell through the railings into the river,” recalled Dufkova.

“We all thought the horse would die, but rescuers managed to save the animal. It was a very moving moment.”

There were 800 extras, including several schoolchildren dressed as Hitler Youth, according to a handwritten village account kept at town hall.

“The stage set was so credible that an accidental tourist would have made the sign of a cross here,” the chronicle says.

But this credibility almost led to a tragedy in the town on the day the Soviet-led armies invaded Czechoslovakia.

“The arrival of the Soviet army in Davle was horrible. A helicopter was circling overhead and the soldiers were terribly scared. This could have resulted in a tragedy,” said Dvorak.

“Someone told them that Davle had been invaded by the US army and that they should liberate us. They had no idea why our people were giving them the finger. They were terribly nervous, the tension was palpable.”

The shooting of “The Bridge at Remagen” was immediately interrupted and the whole film crew rushed back towards the West by taxi, leaving behind all the Sherman and Tiger tanks and other material.

In the autumn of 1968, the film crew was allowed to come back briefly to take a few necessary shots. The film was completed in West Germany and Italy and hit the screens in the United States in 1969.

Meanwhile, the Soviets made savvy use of the movie props, with the film crew quickly replaced by filmmakers from Moscow, who rushed to show Soviet viewers back home images of American and Nazi tanks just 20 kilometers (12 miles) from Prague to justify the invasion. NVG