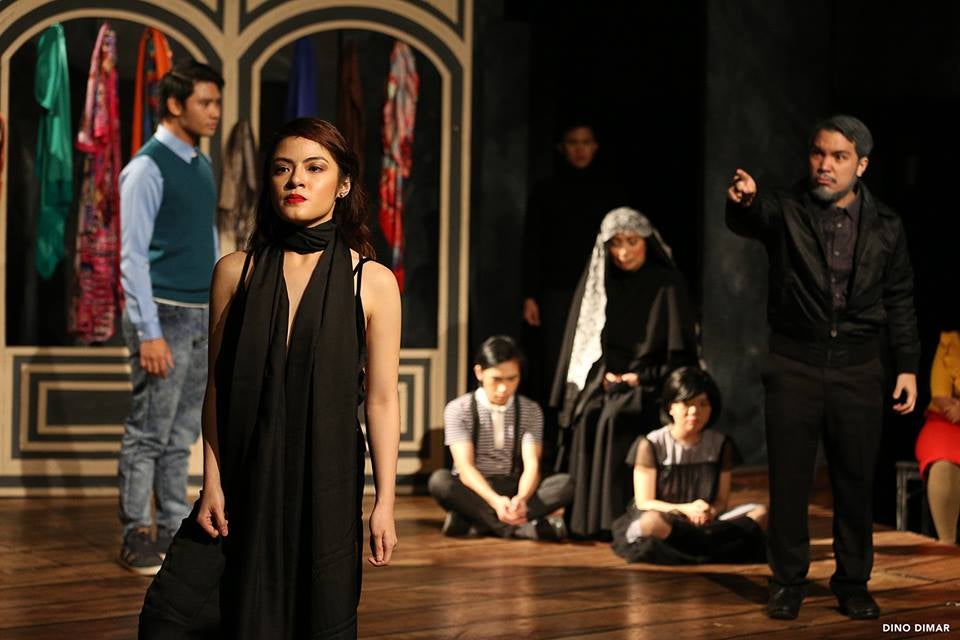 Pirandello, Nana Rosa, and a call to arms in UP theaters’ new season

Not to be outdone, the UP Playwrights’ Theater, which is under the DUP umbrella, will be presenting an original play in Filipino, “Nana Rosa,” about the courageous “comfort woman” of World War II, for its 27th theater season.

This was announced by the new artistic director of DUP, singer-actress Banaue Miclat-Janssen, in a recent press conference at the Wilfrido Ma. Guerrero Theater in UP-Diliman, home of the two companies.

Response to the times

“This is a call to arms,” she said. “It is a response to the signs of the times and an initiative toward innovation, thus the theme ‘Hudyat: Pagkilala, Pag-alaala, Pagpapahalaga’ (Attention: Awareness, Remembrance, Give Value).”

A fascinating excerpt was performed from the Pirandello classic, which will be directed by Dulaang UP founder Tony Mabesa. As translated by Rody Vera, “Anim na Tauhan Naghahanap ng May-akda,” a play within a play, tackles the weighty theme of illusion versus reality.

In it, a rehearsal of a play by Pirandello (yes, the author himself) is going on. It is a very familiar scene, with the exasperated director shouting, and the actors harassed. There is even a chef, although we do not know yet why he is in the scene.

Suddenly, solemnly, to the stupefaction of everybody, six characters arrive and make their way to the stage from the side of the audience. They are members of a family looking for an author to finish their tragic drama. They include the father, the mother, a veiled woman who looks like she has been abducted from the seraglio, two children, and a stepdaughter in a revealing gown.

The father beseeches the director to finish the family’s drama. The latter refuses, and there follows philosophical arguments between the two, until the director capitulates.

“This play is 100 years old,” said Mabesa. “I first directed it in 1976 during the first season of DUP with Laurice Guillen and Angie Ferro. It’s about illusion and reality, a seminal work, one of the masterpieces of world theater. It titillates your mind. It’s one hour and 38 minutes, with an all-student cast. I am energized by the enthusiasm of the young cast.”

Next in the DUP lineup is a rerun of Shimizu Kunio’s “The Dressing Room,” again directed by Alexander Cortez, which had a successful run in 2016. This time the scene will not be in a rehearsal hall but backstage, with four actresses waiting for their cue. Unknown to them, the room is haunted by the ghosts of divas who had their best moments in that space. The play is both comic and wistful, all about aging, surviving and moving on.

“The Dressing Room” was adapted by playwright Chiori Miyagawa, translated into English by John Gillespie and into Filipino by Vera.

“Nana Rosa,” to be directed by Jose Estrella, recounts the life of Rosa Henson, the first Filipino to publicly come out in 1992 as a “comfort woman.” The play follows her story, from her early years in Pampanga to her capture by Japanese troops, to going public about her ordeal decades later, inspiring other abused women and becoming part of an Asia-wide movement to pressure Japan to admit its crimes during WWII.

Said Miclat-Janssen: “We are just presenting three plays, but in a way we are preparing for 40 more years of DUP, a professional mentorship theater where theater professionals and students work closely together to create masterworks.”