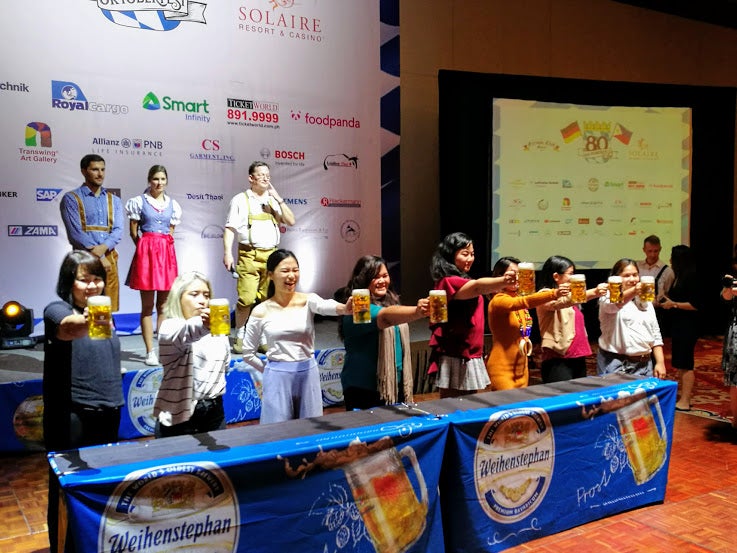 Having learned lately how to drink in moderation, my thoughts flash back to a Philosophy college professor who once came to class looking like he had a few beers, and then blurted: “Alcohol is the flame of truth.”

That’s worth toasting to.

How ’bout this: Beer brings cheer. Really, a few bottles (that means two, or three maximum), or mugs, if you prefer draft, can brighten the mood—like what happened recently at the media launch of German Club Manila’s Oktoberfest, to be held Oct. 4-6 at Solaire.

The featured beer at the launch was Weihenstephaner (pronounced “Vaihenstefaner”), in draft, served ice-cold in a pint glass. It had a refreshing taste, with a mild sweetness. One of the servers said it the lager kind, beer fermented at low temperatures with an average alcohol content of 5 percent per serving. An example of a popular lager in the country is San Miguel Pale Pilsen.

At the launch, German Club Manila members presided over two friendly competitions for males and females: holding a gigantic mugful of Weihenstephaner for as long as you can; and the traditional beer-drinking contest.

Whisky is another drink I like. One of the varieties of ingredients it uses is similar to what beer is made of—wheat.

What’s good about whisky is you consume only a little to feel fine: a double shot (generally measured by two fingers) in a glass, two doubles maximum.

In the past few months, I’ve been trying to capture, with my tongue, what really makes whisky the preferred spirits of many.

Three events helped in my quest. First, the Jack Daniel’s (JD) Whisky Dinner—a five-course meal, each paired with various Jack Daniel’s editions and cocktails—held at Samba in Shangri-La at the Fort, BGC.

JD is said to be the world’s best-selling American whisky, produced in Lynchburg, Tennessee.

The brand’s assistant master distiller, Chris Fletcher, flew in from Tennessee to talk about three variants served that night—Jack Daniel’s Old No. 7, Gentleman Jack and the Single Barrel.

Speaking of chocolate, there’s a smoky taste of cacao each time I sipped the JD 150th anniversary edition, which Fletcher signed on each bottle that was given to journalists at the dinner.

At home, closing my eyes as I let the whisky—neat, no ice—linger on my tongue for a few seconds, a certain sweetness bursts and leaves a momentary euphoria in my head.

Meanwhile, at the second whisky event, “Chivas: Success Speaks Easy,” at Marquis Event Space, also in BGC, the most striking detail in Chivas Regal custodian master blender Colin Scott’s talk was that there are 85 different flavors in every sip of the brand’s 12 Years Old variant.

Chivas Regal, a leading brand of blended Scotch whisky, is said to have been a favorite of the late great Frank Sinatra and the late gonzo writer Hunter Thompson.

There were three kinds served that night—Chivas Regal 12, Extra, and 18. The 18 years old I remember fondly, having enjoyed it with my father in law one night during the Christmas holidays a few years ago.

It had such a smooth taste, there was no need for ice, and it was so light on the head, we ended up finishing one whole bottle.

Like JD, there was a chocolaty taste in the Chivas Extra, plus hints of cinnamon. Could I just be imagining it, anxious as I was trying to catch at least one or two of the 85 flavors that Scott mentioned.

I guess I’ll try again and again, since, at this point, I think there is mystery in whisky.

A third event featured The Dalmore Cigar Malt Reserve—a special edition of the single malt scotch whisky, made to be paired with Cuban cigars.

On hand to help me appreciate the nuances of the drink was The Dalmore master distiller Richard Paterson, nicknamed “The Nose” because of his reputation to distinguish the aromas in this world-renowned brand—incidentally now owned by Andrew Tan under his Emperador empire.

Held at the soon-to-open Cigar Lounge of The Dalmore’s flagship store (both designed by Sonia Santiago Olivares & Associates) in Uptown Bonifacio, Taguig, the tasting and smoking session had Paterson guiding me, step-by-step:

Take a very light sniff of The Dalmore, using the right nostril, and then the left, before having a little sip. Let it linger on top of the tongue, then below the tongue, then sideways, left and right, before finally imbibing it.

There was fruity sweetness, with a little taste of ginger.

The cigar’s tobacco shot through the back of my head with a sharp pain—which made me take more sips of The Dalmore, hahaha.