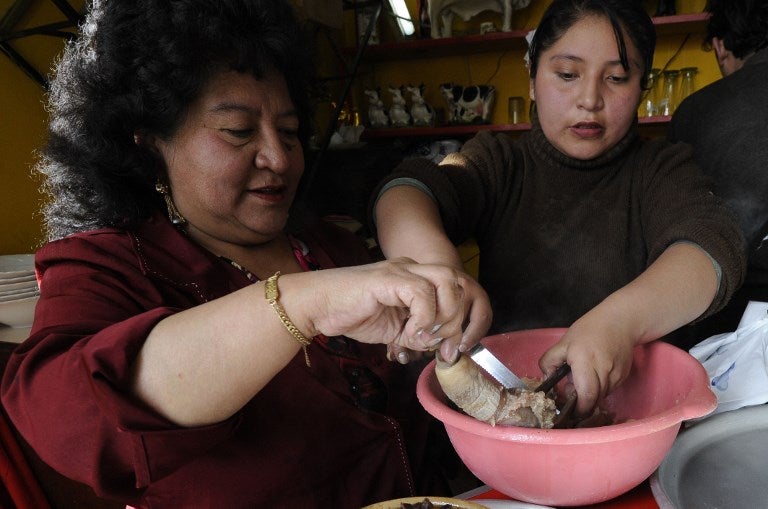 The owner of the Casa de Oro restaurant Aydé Urquizo Jauregui (L) serves "Cardan" --a soup made with phallus and testicles of bulls-- in La Paz on January 18, 2014. For Bolivian people, this soup has aphrodisiac qualities among other powers. AFP PHOTO/Jorge Bernal / AFP PHOTO / JORGE BERNAL

LIPOVICA, Serbia – Spring rolls, ratatouille and curry were on the menu at a quirky food festival in rural Serbia on Saturday, with one gutsy ingredient in common: animal testicles.

Now in its 15th year, the cheeky ‘World Testicle Cooking Championship’ draws a motley mix of teams — from groups of friends to professional chefs — for a few days of fun in the Serbian countryside.

There they set up cooking camps in a forest, stirring bubbling stews over wood fires as they vie for the coveted “Ball Cup”.

While the testicles — grey in color and with a kidney-like texture — may spoil some appetites, festival-goers wax poetic about their taste and alleged aphrodisiac qualities.

“There were some really interesting combinations of flavor… the winner was super, really fantastic,” said Philomena O’Brien, an Australian woman who sat on the three-judge panel that blind-tasted dishes from nearly 20 teams.

“Choosing the best balls is quite a responsibility,” she added with a smile.

The event was started by Ljubomir Erovic, the author of a recipe book called “Cooking with Balls”, who claims testicles boost a man’s libido.

“It’s really an aphrodisiac festival,” he told AFP, before donning a chef’s hat and announcing the winner on stage.

Flares and fireworks lit up the sky after a local Serbian team was crowned the winner, with a team of Japanese curry-makers and French restauranteurs also singled out.

“It was quite challenging to do French gastronomy with testicles,” said a member of the French team, Philippe, who runs a restaurant in Paris.

“But we are happy with the result,” he added, showing off the team’s four-course menu featuring bull testicles with foie gras and chocolate “salty balls”, for which it received a special award.

The secret to their saucy stews?