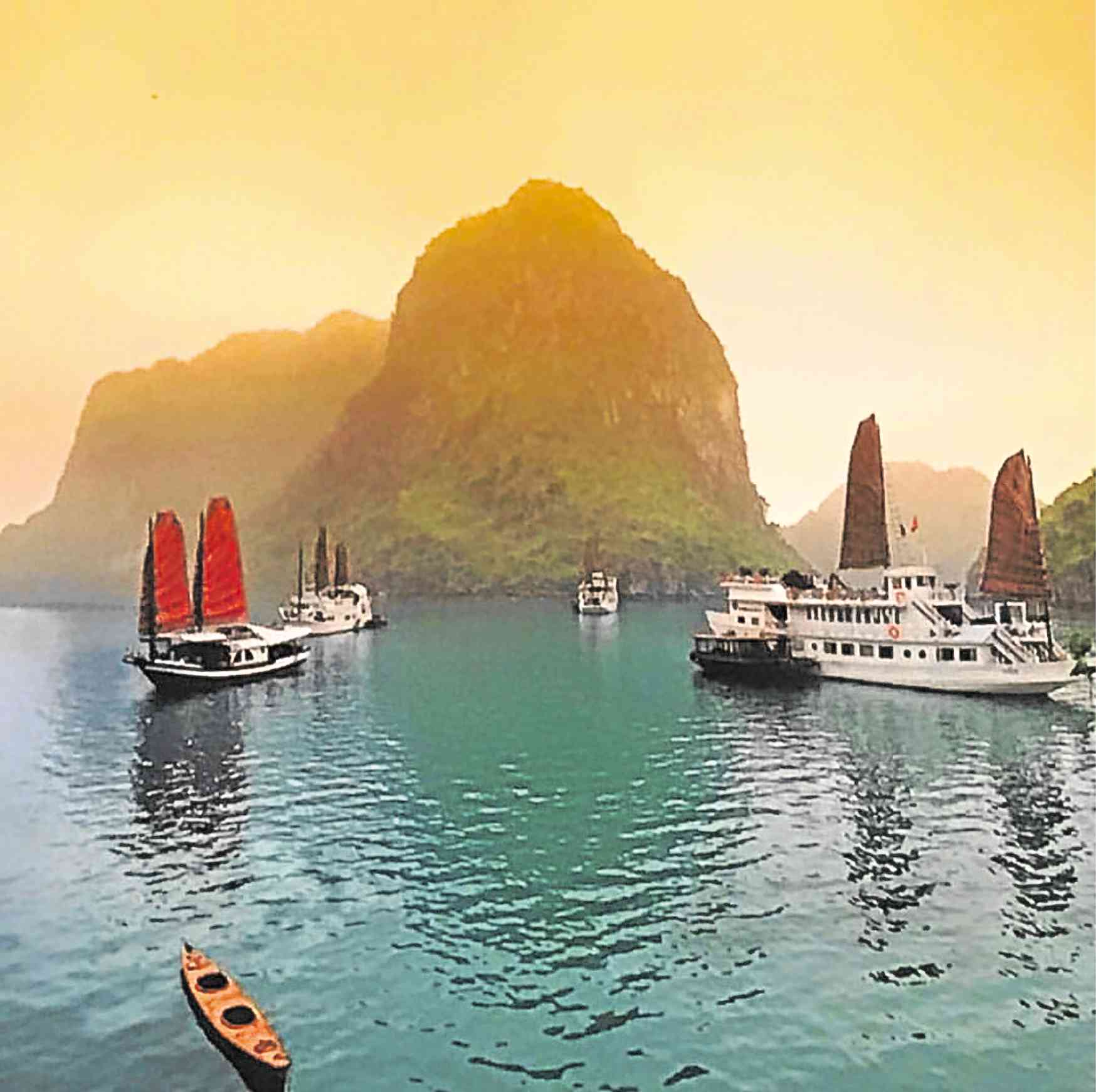 Vietnam, a country scarred by blood and fighting in the 1960s, was always an off-the-beaten-track route for tourists. I remember buying old postcards of French colonial buildings in Saigon (the old name of Ho Chi Minh) in a flea market in Vienna in the late ’80s.

As I had the chance to visit other Asian countries, my fascination with Vietnam became more intense, until last December, a friend and I planned a Holy Week getaway.

It took us 25 minutes to reach Hotel Continental Saigon, a Ho Chi Minh landmark built in the 1880s as a French-style luxury accommodation. It’s centrally located near nice shops, restaurants and hotels, and the beautiful opera house.

The weather was hot but not uncomfortable, and there were trees everywhere. First stop was the post office, done in French colonial architecture style, for sending a postcard to myself, as I do in every city I visit. Inside the building was a cavernous hall with a picture of Ho Chi Minh, father of the socialist republic of Vietnam. Stalls sold souvenir items and postcards. My friend Leo saw a poster for a contemporary ballet performance at the opera house, and we made plans to watch it.

Walking further, we arrived at the glorious monument to Christianity, the Notre Dame Cathedral, built in a neo-Romanesque style with red bricks imported from Marseilles and colored glass windows from Chartres, France. In front of the cathedral was a statue of the Virgin Mary. The cathedral’s two 58-meter-high towers topped with iron spires dominate the city’s skyline.

Next on the agenda was filling our grumbling stomachs. We saw a lot of stalls selling banh mi, the local sandwich made with a baguette, the bread of the French colonizers, with grilled pork, vegetables and a special sauce. We ended up in Quan Vietnamese Bistro, a modern restaurant with a good selection. We ordered pork ribs, crispy catfish and the fresh spring rolls found in every Vietnamese menu. The food was very good, and the bill just right.

The next day, we went to the opera house to catch the ballet “The Mist” by Lune Productions. It was about the rice farmers of Vietnam, featuring dance movements accompanied by music played with traditional instruments.

From there we went to look for Layla, a bar-cum-restaurant, with much effort. The entrance was unassuming, and we climbed the fourth floor, bypassing a lady who seemed to have built a cardboard house on one of the landings. Behind a small door, Layla was teeming with young Vietnamese, drinking and chatting.

The next morning was Palm Sunday, and Notre Dame was full. We proceeded to the Fine Arts Museum, housed in a complex of French colonial buildings that used to be owned by a rich Chinese immigrant. The buildings were as beautiful as the artworks from the early 1920s to as late as 2000, contemporary pieces by famous Vietnamese painters. The museum also houses sculptures and ceramics.

We walked to Antique Street (Le Cong Kieu Street), lined with stalls and antique shops from end to end. I drooled over the merchandise from furniture and ceramics to snuff bottles and beads. I settled for a horn snuff bottle that I had always wanted to have while Leo bought some beads.

Next was Cho Ben Tanh, their version of a grand bazaar or our very own Divisoria in Manila, where we also had lunch in the market to savor local dishes. In the evening, we went to a rooftop bar overlooking the south of the city, where we drank as the sun set and all the lights came on—including the red brake lights and headlights of the cars.

It was an early morning flight for us the next day to Hanoi, capital city of Vietnam. The weather was very different, windy and cool, and we stayed at La Siesta, a trendy hotel in the old quarter.

The staff was very helpful and attentive, with a great command of English. We went to St. Joseph’s Cathedral, passing all sorts of stores selling all things Vietnamese—fresh meat, vegetables, flowers, coffee, antiques, propaganda posters and T-shirts.

The cathedral was built in 1886, in a style described as resembling Notre Dame in Paris. It was one of the first structures built by the French colonial government in Indochina and is the oldest church in Hanoi. After lighting a candle to give thanks for our visit and pray for our families and friends, we went to a restaurant for a late lunch.

We walked from the old quarter to Hoan Kiem Lake, where people converged to run, talk or just sit on benches. In the center of the lake is the Turtle Tower, standing on a small island. Legend has it that in early 1428, Emperor Le Loi was boating on the lake when a golden turtle god surfaced and asked for his magic sword, which the ruler had used to fight off the Chinese.

From the vantage point of the turtle tower, we went to the northern part of the lake, to Jade Island, where the Temple of the Jade Mountain stands. The temple was erected in the 18th century, and honors the 13th-century military leader Tran Hung Dao who distinguished himself in the fight against the Chinese. Jade Island is connected to the lakeshore by Huc Bridge.

Since the temple was teeming with tourists, we opted instead to sit on a bench and wait for a sighting of one of the turtles, which, legend says, brings you luck. Little did we know that the last turtle died in 2016!

We proceeded to a bar in the old quarter, chatting with tourists. Vietnam is a tourist favorite these days because the people are nice, it is safe to walk the streets at night and the food is flavorful.

The next day, we were picked up for our overnight trip to Halong Bay, a United Nations Educational, Scientific and Cultural Organization World Heritage Site famous for its emerald waters and towering limestone islands. Junk boat tours and sea kayak expeditions take visitors past islands named for their shapes, including Stone Dog and Teapot Islets.

From Hanoi, it’s a four-hour drive to the wharf where you get on your boat, which sails around the 1,500-square kilometer area. We stopped on a beach, climbed an overlook tower, and tried kayaking. From the veranda of our room on the boat, we could see the people enjoying the beach and the climb up the tower.

Dinner was served in the dining room of the boat, and the food was as great as in the finest Vietnamese restaurants in the city. After a good night’s sleep on very calm water, we toured a cave before heading back to the city.

At night, we went to the opera house to see its grandeur, just like the well-lit buildings of Paris by night, with their beautiful and intricate architecture. Walking past Metropole, the grand dame of hotels in Hanoi, we headed to the French quarter for a dinner of regional specialties.

Walking around the wide open space of the Ho Chi Minh mausoleum and its surrounding colonial-style government buildings, my eyes watered at how they preserved their cultural heritage—what a marvelous sight!

At 54 Traditions Antique Store, we were entertained by Mark Rapoport, a New York native who has lived in Hanoi for 17 years. He loved it so much, in fact, he wrote a pamphlet entitled “101 Reasons to Love Living in Hanoi.” He toured us around his five-story antique gallery with everything from clothing to jewelry, ceramics to wooden puppets.

I got myself a prinsa, an old bronze clothes iron much like our old irons in the Philippines, but more intricate. The handle featured a face, complete with a moustache, and etched with lines and curves that resemble clouds. What a find! Wooden masks also caught my eye, some laughing, others frightful. I got one with a smile.

The next day, we headed back to Ho Chi Minh for a night to catch our flight back to Manila. We checked in at Liberty Central Riverside to be beside the Saigon River and dined at Hum Vegetarian Restaurant, where the food was very tasty. We enjoyed a heart of banana blossom salad, a traditional dish in Vietnamese villages.

After eating, we went to Ben Tanh Market to buy pasalubong, including kilos of Vietnamese candies and cashew as big as thumbs—and tasty, too.

Taking a cab to and from your hotel is always a challenge. The reliable ones are Vinasun or Mailihn

In the evening, we went to a rooftop sky bar for our final cocktails in Ho Chi Minh.

We wandered down Buy Vien, a walking street with rows of bars, street food and restaurants with loud music, considered a backpackers’ haven.

Will we visit Vietnam again? Yes, with a capital Y! The people are nice, willing to help, the cuisine is incredible and it’s a good place to explore with friends and family.—CONTRIBUTED