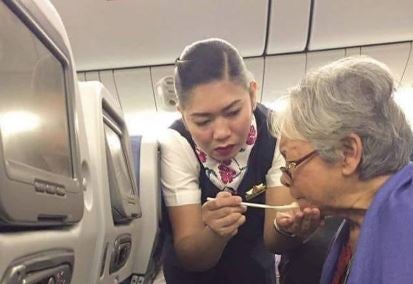 The netizen praised the flight attendant, Chet Encarnacion, for her “buong pusong alaga” (wholehearted care) to the elderly.

“Whoever she is, may the Lord bless you a thousand fold and make you the cabin crew of the century,” wrote the netizen last Aug. 31. At that time, the identity of the flight attendant was still unknown, prompting the netizen to ask help from others to identify who she could be.

“Buong Pusong Alaga in action. This deserves 5 stars. #FindTheMysteryCrew,” she appealed to netizens.

Whoever she is, may the Lord bless you a thousand fold and make you the cabin crew of the century. ✨ Buong Pusong Alaga in action. 😭 This deserves 5 stars ⭐️⭐️⭐️⭐️⭐️ #FindTheMysteryCrew

It didn’t take long, however, for the flight attendant’s identity to be revealed, as the post made the rounds on Facebook and has since garnered 70,000 likes and 32,000 shares.

In a post made on Sept. 2, the netizen took to Facebook again to write a personal letter to Chet, the flight attendant in the picture.

“Dear Chet, finally found you! Just want to say that you are a gem,” wrote the netizen. “We’ve seen enough toxic news over the internet the past few months, and seeing your act of kindness towards an elderly is more than enough to give us HOPE that there are still people like you who will still DO THE RIGHT THING even if no one is watching.”

Dear Chet,Finally found you! 😊 Just want to say that you are a gem. We’ve seen enough toxic news over the internet the…

The netizen, too, lauded Chet for exuding grace and class, and for going beyond what is tasked of her to care for the passengers and ensure they have a good flight experience.

“You must have been so exhausted on that flight yet you still managed to go above & beyond with so much grace & class,” the netizen continued to say. “So the next time I board a plane, I will think of flight attendants like you who has so much heart & care to give on their passengers.”

The netizen also vowed that the next time she experiences a delayed flight, she’ll keep in mind the hard work flight attendants go through in their profession instead of complaining.

“Your job is no easy feat and is physically challenging,” the netizen said. “But despite of that, you gave your Buong Pusong Alaga without expecting anything in return…”

“Mabuhay ka, Chet (Long live, Chet)!! And to the rest of the flight attendants who [take]care of us in-flight – keeping us comfortable & safe. Maraming, Maraming SALAMAT (thank you so much)!!”

In the past, another flight attendant from PAL was also praised for communicating with a deaf couple inboard in Filipino sign language. Anita Ygoña, the flight attendant, was a former special education (SPED) teacher in Dumaguete, and was taught sign language by a deaf friend. Ygoña’s act was hailed by the deaf couple, who were both joyous to find someone who could communicate with them in their own language.

A salute to all the hardworking flight attendants that be! JB