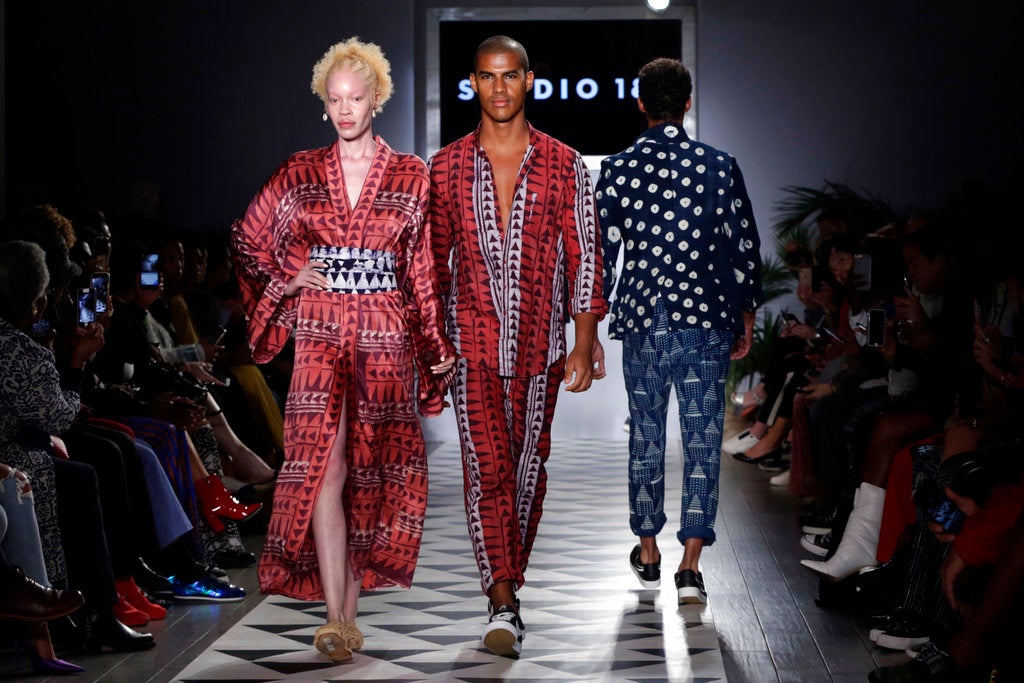 Studio 189’s runway was a party of dance, song and fashion

NEW YORK — The Ghana-based Studio 189, co-founded by old friends Rosario Dawson and Abrima Erwiah, threw a runway celebration Monday at New York Fashion Week with African dance, an Aretha Franklin tribute in song and a show alive with African-made and inspired designs worn by a wide range of models, from the pregnant to the not-yet grown.

Two little girls were among the walkers and actress Dawson herself took a turn as a model, all in the latest styles for men and women from the lifestyle brand and social enterprise that puts out the clothing line Fashion Rising.

Studio 189 is a collective of artists and other creatives that offers a platform to help promote and curate African and African-inspired content with a focus on sustainability. Fashion Rising includes artisan-produced fabrics, often in organic cottons grown by small farmers it works with. The collective and the fashion line were launched to support the global One Billion Rising, founded in 2012 as part of the V-Day movement to combat rape and sexual violence against women.

Dawson, who met Erwiah when they were 16, formed Studio 189 and Fashion Rising after taking a trip with V-Day in 2011 through Kenya, Burundi, Rwanda and the Democratic Republic of Congo.

In bright, green, red and blue prints for dresses, shirts and pants, a graphic black print in a trouser and shirt set for men, kente wraps and contemporary looks of bold stripes and ruffled skirts, Fashion Rising was treated to rousing support from a packed room of guests that included singer Maxwell, Alicia Keys and Naomi Campbell.

Singer Frenchie Davis belted “(You Make Me Feel Like) A Natural Woman” on the runway in a sun-yellow dress in honor of the late Aretha Franklin.

This show made people happy. The crowd was on its feet and clapping the models and dancers down the runway, including one model using crutches and a prosthetic leg. Another is about to give birth and one off the gender binary walked with a mustache in a dress. They were joined by others of all colors and shapes.

“Studio 189 is an agent for social change” in a variety of ways, including supporting artisans around the world but primarily in Ghana and West Africa, Erwiah said backstage after the show, the collective’s first full-scale turn at fashion week.

Much of the clothing included natural dye processing, hand-looming and hand-painting.

Dawson said the show was also a celebration of art. “It’s one of the most vital things we have as human beings,” she said. “We are not robots. We are a heart, we are a spirit, we are an energy.”

Dawson and Erwiah are still building out their collective, facing the challenges of working in developing countries, taking on the fashion industry and trying to “connect the dots” of the supply chain across borders. For Fashion Rising, embracing inclusiveness on the runway is a priority.

Aretha Franklin dresses, hats to go up for auction