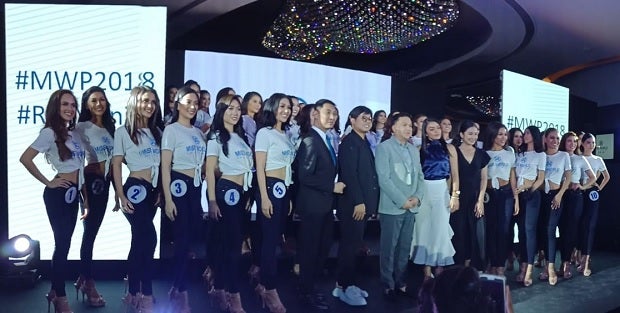 The official candidates for the Miss World Philippines 2018 has been officially launched, their names listed in the pageant’s official website.

This batch has to contend with the mounting pressure and expectations from fans and critic alike following victory of three Filipinos in three pageants last year.

For this year, 40 lovely ladies from key cities and provinces – one of them from the United States and another from Canada – are vying to become the country’s representative to the next Miss World pageant.

The contenders for the Miss World Philippines title were presented at the Vestibule Bar at Resorts World.

They are as follows:

Last year, the Philippines became a force to reckon with its victories in three pageants – Teresita Ssen Marquez in the Reina Hispanoamericana 2017, Sophia Senoron in the Miss Multinational 2017, and Cynthia Thomalla in the Miss Eco International 2018.

As against last year, selection for this year’s cut was actually easier according to Miss World Philippines general manager Bessie Besana.

He said there was an “overflowing number of applicants” which only proves that more and more Filipinas are encouraged to compete.

Only two-thirds of last year’s queens were present at the official launch.

Thomalla and Senoron gladly welcomed the new contenders for the Miss World Philippines pageant who would vie for six titles.

Marquez was not able to make it due to conflict in her schedule. She wished the girls luck, however, via Instagram and even reminisced about her stint last year by uploading a photo of her during the launch of the candidates for the preliminaries.

Miss World Philippines 2018 is set to happen on Oct. 7 at the Mall of Asia Arena. /atm