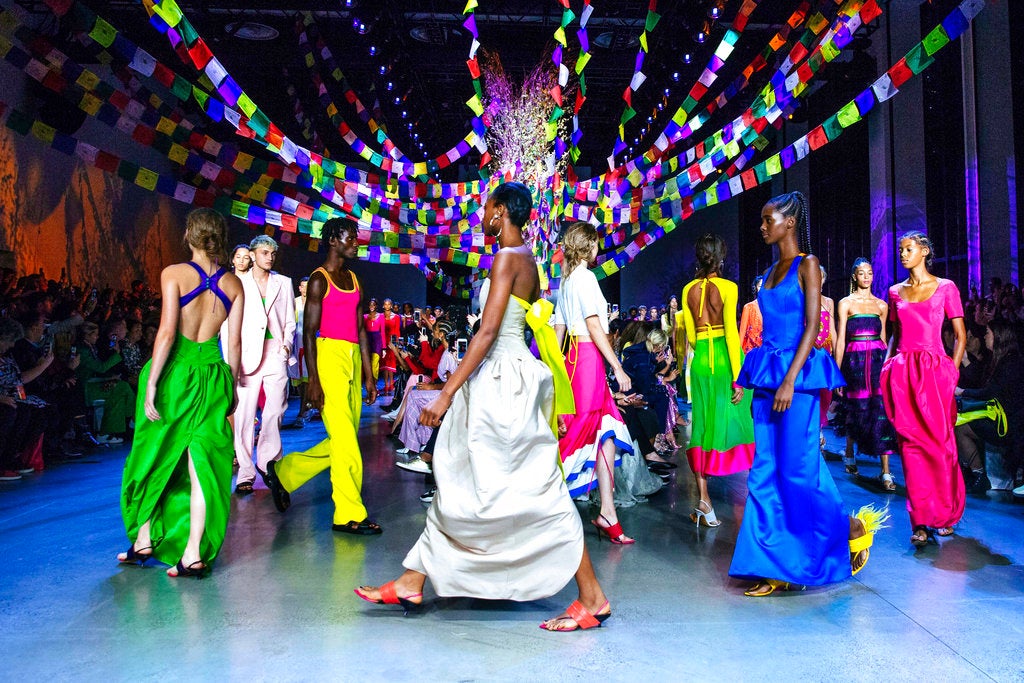 NEW YORK (AP) — Prabal Gurung had a lot to say at New York Fashion Week, and he said it in living color.

The designer sent models from 35 countries around the globe down his runway Sunday, chosen to represent a world where “all humanity reigns.” Because, as Bruce Springsteen said in Gurung’s closing song, we can “Dream Baby Dream.”

Until then, we can imagine living in Gurung’s festive utopia beneath his rainbow of Buddhist prayer flags hanging from the ceiling center stage. And we can take a hint printed on seat assignment cards left for his guests: “I am a voter.”

And, for the first time, we can revel in his first menswear collection. There were loose yellow trousers with a red tank, a blush tone summer suit, a color-blocked anorak, and orange floral joggers paired with a long-sleeve pullover shirt showing off horizontal stripes of pink, green and white. Among his men was Anwar Hadid, joined in the show by his supermodel sisters, Gigi and Bella.

Gurung said in show notes that his collection for spring symbolized a voyage inspired by his own recent travels, from indigenous villages in his native Nepal to the urban streets of Tokyo, London, Mumbai, Paris, Shanghai, Abu Dhabi and New York. He wants to “see no borders,” using color as his universal language.

There were sari looks, including one that draped a shoulder in orange, swinging bead fringe in orange on a sparkly pink dress and loose feathers that swooshed on the legs of stone-colored pants.

Much of what Gurung had in mind was beach ready, while other looks were dressier, including a strapless gown of vertical yellow and green stripes.

Whether in a sky blue dress printed in green flowers with a sheer skirt, or wearing a cozy sweater in purple with stripes of orange and pink with draped skirt, Gurung urges us on.

“Live in color,” he wrote in his notes. “Lead with your heart. Find peace in the journey.” NVG

At Oscar de la Renta, a Mediterranean vacation on a rooftop