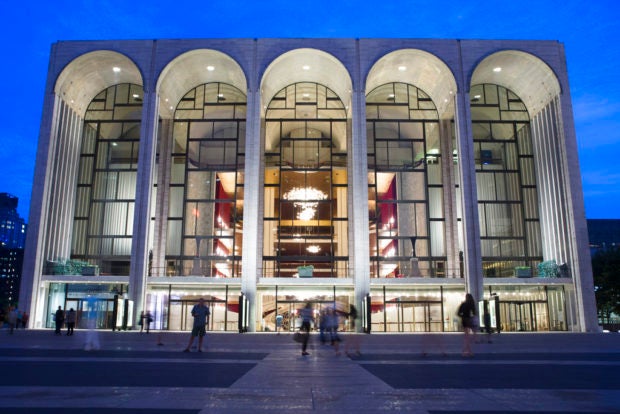 FILE - In this Aug. 1, 2014, file photo, pedestrians make their way in front of the Metropolitan Opera house at New York's Lincoln Center. The Metropolitan Opera will start regular Sunday afternoon performances for the first time in its century-plus history during the 2019-20 season. (AP Poto/John Minchillo, File)

NEW YORK — The Metropolitan Opera will start regular Sunday afternoon performances for the first time in its century-plus history during the 2019-20 season.

As part of its new union agreements announced Friday, the company also will go dark each February beginning in 2020-21. The Met will open the second half of each season in March with a new production, and the season will extend by a month into mid-June.

The Met has had slumping ticket sales in recent years, hurt by an aging audience and a shift away from subscriptions by attendees for most arts performances. The Met sold 75 percent of capacity last season and 67 percent of available box office, about the same as in 2016-17.

“We know that Saturday matinees perform 15-20 percent better at the box office than weeknights and we project Sundays will do the same,” Met General Manager Peter Gelb said, anticipating revenue will increase by millions of dollars.

As part of three-year contracts, the Met has the right to present up to 17 Sunday matinees in 2019-20 and 27 the following season. Any Sunday performance will be followed by a Monday off for both performances and orchestra rehearsals. There also are limits on Tuesday morning rehearsals after Sunday shows.

The shift to performances later in the spring also project to increase revenue. February usually has a lower percentage of tickets sold because of winter weather and a drop in tourism.

Because of the shift, the American Ballet Theater spring/summer season at the Met will be cut from eight weeks to five.

Gelb said the Met may present outside performances during the first week of the February break and that the Met Orchestra likely will give a concert at Carnegie Hall.

The agreements with local 802 of the Associated Musicians of Greater New York and the American Guild of Musical Artists still must be ratified by the AGMA board of governors this month. The deals call for 3 percent raises in both 2018-19 and 2019-20, 1 percent in the first six months of 2020-21 and 1 percent in the second half of 2020-21. A formal two-year tenure process for the orchestra was put in writing and an artistic advisory committee was established.

“Demonstrating a continued willingness to invest in the Met’s long-term stability, we have agreed to add Sunday performances, which we recognize will reach new audiences, while also securing important protections and improvements that will safeguard artists’ work-life balance,” the unions said in a joint statement.

The previous agreements in 2014 were reached after contentious negotiations in which the Met asked for givebacks.

“Last time was about tackling costs and this time we’re dealing with increasing revenues,” Gelb said. “It seemed like the time was right.” MKH

From ‘the sticks’ to opera top bill, thanks to karaoke