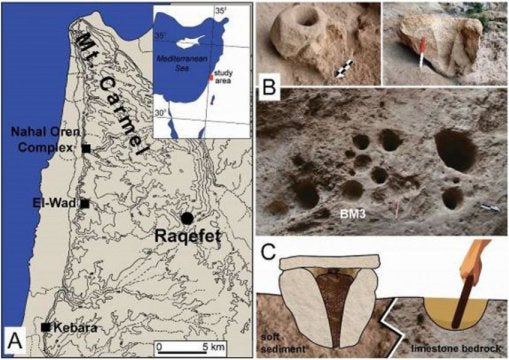 Archaeologists have found what they believe is the world’s oldest site for alcohol production, a study said Thursday, adding the beer-like beverage may have been served in ceremonies some 13,000 years ago.

The site is located in the Raqefet cave south of Haifa in today’s northern Israel that also served as a burial site for the Natufian people.

“If we’re right, this is the earliest testament in the world to alcohol production of any kind,” Dani Nadel, an archaeology professor at the University of Haifa and one of the authors of the article published in the “Journal of Archaeological Science: Reports”, told AFP.

“We know what the Natufians did in the cave. They buried some of their dead on a platform of flowers and plants, and apparently also produced a soup-like liquid, an alcoholic drink,” the professor added.

According to Nadel, the liquid was “different than today’s beer” and probably much weaker, “but fermented.”

Three small pits, or mortars, were discovered that had been carved into the surface of the Raqefet cave. Two of the small stone mortars were for storing grains, and the third for pounding and brewing grains ahead of fermentation, the study found. The mortars were some 40 to 60 centimetres (one-two foot) deep.

The location of the mortars in the burial caves implies the drink was “apparently connected to the ceremonies, or some sort of social event,” Nadel said.

According to the article, published with researchers from Stanford University in the United States, the beer-making innovations “predated the appearance of domesticated cereals by several millennia in the Near East.”

The Natufians were hunter-gatherers who lived in the eastern Mediterranean region 15,000 to 11,500 years ago, and began settling down rather than roving from place to place. They were “the last in the region who lived in a different way than the villages we’re familiar with,” Nadel said.

The efforts put into producing the alcoholic beverage showed the importance of the drink in the Natufian culture, he noted. JB

How to become a Michelin inspector in New York