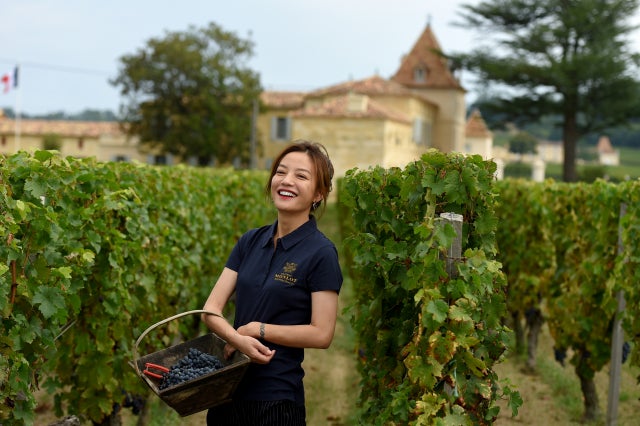 Chinese singer and actress Zhao Wei on September 18, 2018 in Saint-Hippolyte, southwestern France, in her vineyard of Chateau Monlot which is being harvested. Zhao Wei bought the Chateau Monlot, a seven hectare Saint-Emilion Grand Cru, in 2011. Image: Nicolas Tucat / AFP

Chinese actress has high hopes for her Bordeaux vineyard

A Chinese film star got her hands dirty Tuesday to kick off the harvest at her Bordeaux vineyard, which she aims to propel into the ranks of top estates as demand for French wines grows back home.

Zhao Wei, also known as Vicky Zhao, bought the Chateau Monlot in the Saint-Emilion region of southwest France in 2011, part of a wave of Chinese buyers snapping up parcels in recent years.

“I want to make Chateau Monlot a grand wine, emblematic of the Bordeaux vineyards,” said Zhao as she snipped bunches of grapes outside the 17th century castle, built on land that once belonged to King Louis XIII.

Her chances of success may be better than most: She has teamed up with Jean-Claude Berrouet, a legendary winemaker known for his years at Petrus, one of the most prized Bordeaux reds in the world.

The Monlot domaine produces around 35,000 bottles each year, sold in France but also exported to Canada, China, Japan and Singapore.

“I started drinking red wine after I stopped drinking sake and whiskey, because it’s better for your heart — it’s about the only thing I drink now,” she said.

Chinese buyers have purchased around 160 estates in the greater Bordeaux area over the past several years, accounting for about three percent of the region’s vineyard acreage.

Other high-profile enthusiasts include Jack Ma, the billionaire founder of the e-commerce giant Alibaba, who bought in 2016 the Chateau de Sours, a little-known estate that nonetheless boasts an 18th-century castle and produces 500,000 bottles a year. AB