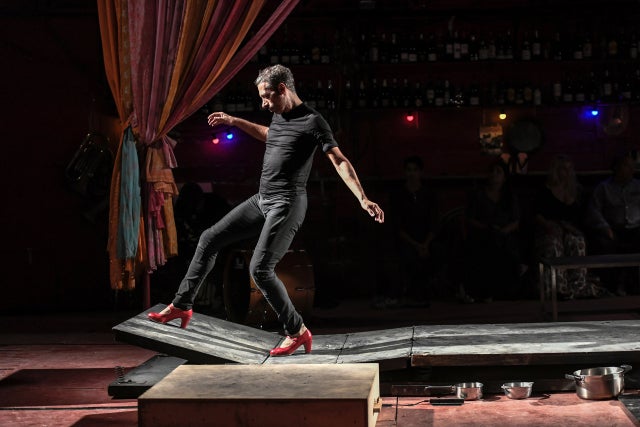 Israel Galvan, the brooding star of modern flamenco, is used to conjuring up miracles on stage.

But in his new show Galvan has to herd cats.

The Spanish dancer shares the stage with an extended family of felines in “Gatomaquia” at the Romanes circus in Paris.

Cats can be pretty capricious at the best of times, and Galvan’s co-stars have all the extra air of independence that comes with belonging to a gypsy (Roma) troupe.

Yet the 45-year-old Seville-born dancer takes the dozen or so wandering toms in his stride in the show, which is both a humorous nod to the big cats that are the traditional stars of the big top, and the Spanish expression “four cats”, for when there isn’t a soul around.

“The cats are the finishing touch, they are the elves of the camp,” he said referring to the Romany circus, which was allowed to set up in a corner of one of the French capital’s richest neighborhoods three years ago despite the objections of some well-heeled residents.

The enfant terrible of flamenco, who created the hit show “Lo Real” about the Nazi attempt to exterminate the Roma, gave up his hotel room to move into a caravan with the Romanes family until the show ends this weekend.

“It is a unique opportunity for me to be here,” he told AFP.

“When I arrived I thought to myself, ‘Stay a while and share in this.'”

The Romanes family say their traditional Roma circus is the last of its kind, with the matriarch of the clan, Delia, taking to the stage to sing after Galvan while her five daughters also dance.

Galvan, who has often horrified flamenco purists, dances in red high heels for part of the show.

But he is far from worried by the critics. He said you never can tell how they will react “but at the circus people are much more relaxed.” AB