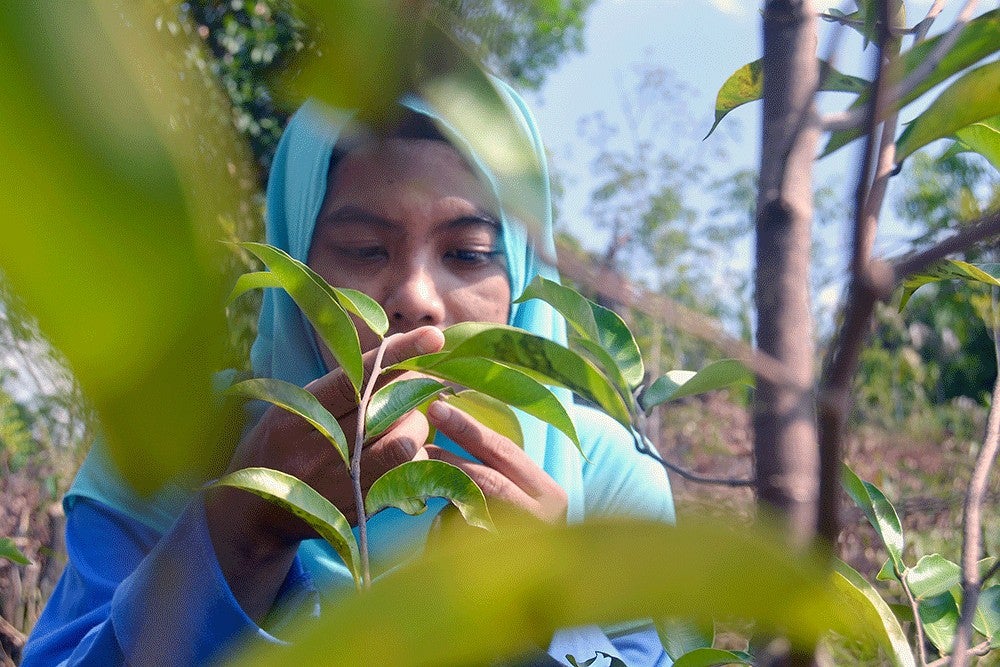 Looking for something: A woman examines gaharu (agarwood) leaves for worms. Gaharu growers use an organic farming system, in which pests in the form of worms are manually removed. SEVERIANUS ENDI, THE JAKARTA POST/ASIA NEWS NETWORK

Forest conservation on the Malaysia-Indonesia border

KUCHING, Malaysia — The number of people occupying each of the longhouses increases during the celebration of Gawai, a Dayak ethnic harvest festival observed as a national holiday in Sarawak.

Dozens of people can be seen working under the sweltering midday sun in a hilly area where around 11,000 gaharu (agarwood) trees were planted last year.

The area is a part of a 14,000-hectare conservation zone in Sarawak, east Malaysia.

Known as the Ulu Menyang village of Batang Ai, the area is home to the ethnic Dayak Iban community and its members have been using the worms that are found on gaharu leaves as a traditional method of removing pests from their farms because they do not use pesticide. However, the hot weather has made it difficult for the local farmers to find these worms, which do not like high temperatures.

The locals have been practicing organic agriculture and sustainable cultivation methods by harvesting anything they can get from the gaharu trees without cutting them down.

“At the end of 2018, the leaves of about 5,000 trees can be harvested to make tea. Gaharu tea today offers a promising price [US$1.45 per kilogram] when exported to China,” said Manggat Anak Meringai, head of the longhouse, which is a traditional gathering place for the Dayak community, in Ulu Menyang.

The longhouse has 17 doors with around 30 occupants, all participating in this gaharu planting program. It is one the eight longhouses in Batang Ai. Longhouses also serve as homestay facilities for tourists.

From Kuching, these longhouses are accessible within six hours by car followed by a speedboat trip along Batang Ai Dam. From Indonesia, it’s convenient to start from Nanga Badau in Kapuas Hulu, West Kalimantan, a journey that takes only 30 minutes.

The number of people occupying each of the longhouses increases during the celebration of Gawai, a Dayak ethnic harvest festival observed as a national holiday in Sarawak. These additional occupants are longhouse family members living in cities as students or employees.

Some of the visitors also came from Kapuas Hulu regency, West Kalimantan, sharing a common land border with Sarawak and related by kinship due to their same ethnic origin. Four journalists from Pontianak and three from Kuching joined the tour arranged by the WWF-Malaysia Sarawak Conservation Program.

Climate initiative project manager of the WWF Sarawak Program, Cynthia Chin, said the planting of gaharu trees in the area was aimed at safeguarding the habitat of orangutans and creating value added for local people. Around 100 orangutans have been detected in Batang Ai.

“Greening degraded land through gaharu planting not only protects the forest but also the local community here,” Chin said.

The residents of the border region live in the same conservation zone.

Many long boats are available in the region for visitors to cruise Batang Ai Dam’s waters, visit small islands, enjoy their panoramas and observe orangutans in their natural habitat.

Manggat assured his commitment to fighting illegal logging with local people and even seize whoever dares to violate the law.

“If illegal logging is ignored, the local wildlife will disappear. The forest will also be denuded while we and many other groups highly depend on our environment,” he added.

Batang Ai village is also part of the Heart of Borneo (HoB), an initiative of Malaysia, Brunei Darussalam and Indonesia with 22 million ha of natural forestland made up of primary forest zones, the habitat of wild animals like orangutans, various economic potential and distinctive local cultures.

Residents of both countries share their experience in forest enrichment with plants suited to their respective economic value. The collaborative management of various stakeholders helps support residents’ livelihood by rejuvenating 43,000-ha of degraded land. Hopefully, the local people will not just be bystanders on their own land.

“They focus on improving the quality of rubber to raise its sale value. Today, rubber costs only Rp 6,000 [40 US cents] per kilogram. There’s a chance of increasing the price if they harvest rubber according to factory standards,” added Burhanuddin.