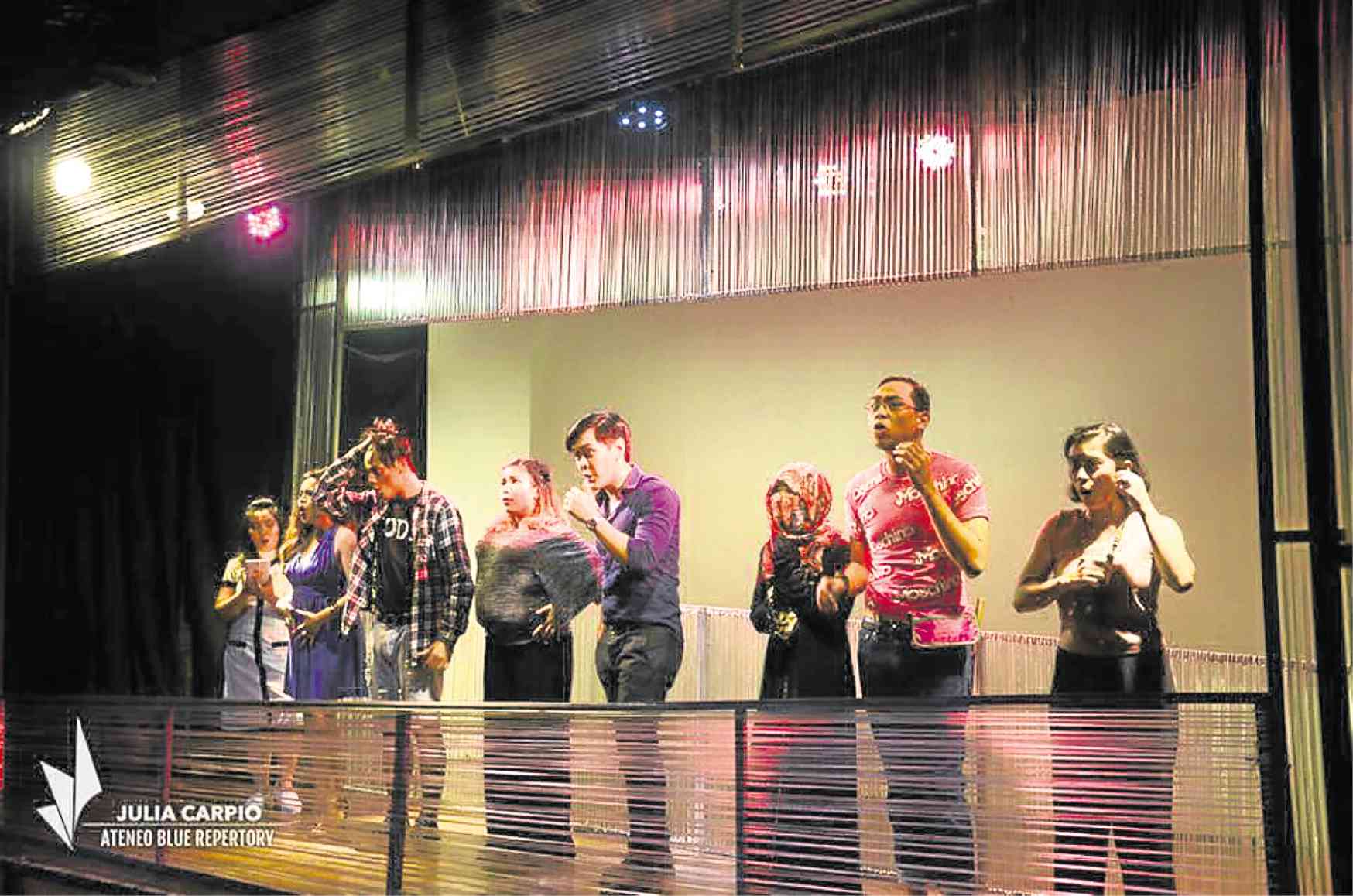 Ateneo Blue Repertory’s “Skin Deep,” which runs until tomorrow, Sept. 30, at the Gonzaga Fine Arts Theater, Ateneo de Manila University, follows seven individuals at a futuristic “beauty resort,” where they undergo physical makeovers that only end up exposing their insecurities, as well as the resort’s own sinister secrets.

Written and composed by Vincent de Jesus, the musical uses its gradually shifting tone in interesting ways—revealing darker layers hiding within its score and allowing its cast to grow out of their characters’ initial stereotypes. “Skin Deep” makes for surprising, twisted viewing, though some of its storytelling choices keep it from being compelling all the way through.

What helps make the production so disturbing is the fact that De Jesus’ writing really doesn’t stray too far into speculative or science fiction territory. He knows that the local beauty industry as it is today can already be eerily impersonal and extreme with regard to some of its practices. So he plays off of this through music that frequently evokes the sound of catchy commercial themes and artificially produced jingles.

The result is an eclectic score that’s simultaneously humorous (with upbeat songs like “Minor Procedures” and “Do Ya”), creepy (the two-part finale “This Make Over Is Over”), and deeply sorrowful (“Ako’y Nasanay Na,” “Aayusin Naming Dalawa”).

However, as dynamic as “Skin Deep’s” music is, its story can’t quite break away from mulling over the same themes throughout its nearly three-hour running time. This isn’t a fault of just this musical, though; most stories revolving around physical beauty tend to go the same direction—reflecting on personal health, self-worth and interpersonal relationships.

But while De Jesus may just be continuing an ongoing discussion, the production doesn’t necessarily offer a unique perspective on beauty. Certain characters also stop developing after a certain point, and one of them experiences a change that’s played too much for shock value. It’s admirable that the musical aspires to full-on horror, but one of its more “taboo” reveals could have been handled with more nuance.

De Jesus clearly has no qualms exploring provocative or controversial ideas, so it’s something of a missed opportunity that “Skin Deep” isn’t staged with this same commitment to darkness. The production team aims to give the set a sense of clinical detachment through minimal furnishing, but it ends up looking more vacant than purposefully bare. And while it’s impressive how Ateneo Blue Repertory transforms the tiny stage of the Gonzaga Fine Arts Theater into three descending runways, the space ends up becoming somewhat restrictive anyway. The more we see the actors travel from one aisle to another in the same fashion, the slower the production seems to move.

Thankfully, the musical generally makes good use of its relatively more relaxed pace. It doesn’t actually spend a lot of time showing us its characters’ makeovers; it’s more interested in the quiet moments in between—in conversations, small gestures and periods of silent introspection.

“Skin Deep” makes sure to have every character interact with each other, with every new pairing bringing something new out of each person. And the production refuses to hold them to their labels, too. It shows us that even the most sincere individuals are capable of cruel words, and those who appear vapid and uncaring are also deeply vulnerable. As character drama, the musical is complex and surprisingly mature.

It’s no surprise, then, that the production’s greatest strength is its cast. Each actor here is more than capable of bringing out complexity during moments of conflict and indecision. In particular, Marynor Madamesila (who plays beauty queen Amor de Sangre), Jason Tan Liwag (as the love-starved Pipay Organza) and Joviell Sta. Maria (as clueless male model Chonggo Go) are responsible for “Skin Deep’s” biggest laughs and its most affecting emotional beats.

And tying everyone together is Jan Rey Escano’s imposing turn as Dr. Beau Batoctol, whose ever-present smile grows more threatening every time we see it. It serves as a reminder to be disturbed by beauty—to recognize its appeal, its capacity to corrupt, and the choice we have to use it wisely. —CONTRIBUTED