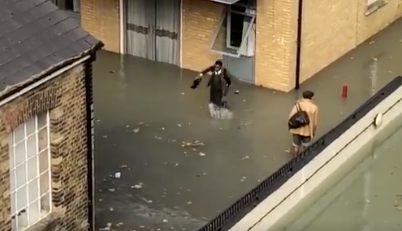 A burst water pipe caused localized flooding around the River Lea in Clapton, London on Wednesday, Oct. 3, submerging some cars, flooding properties, and making it difficult for some residents to leave their homes.

But the video here shows a schoolboy leaving his flooded home by the window, carrying his shoes and with his trousers rolled up as he wades through the water. The video was posted on Twitter, one the same day by one Max (@maxscottslade).

Thames Water said around midnight that it was aware of the burst main, and that it had engineers on site from around 3 a.m. By 10 a.m., the broken pipe had not been repaired, and water had filled an underground car park. JB