Fil-Am thinks he can dance… and boy, he definitely can | Inquirer Lifestyle 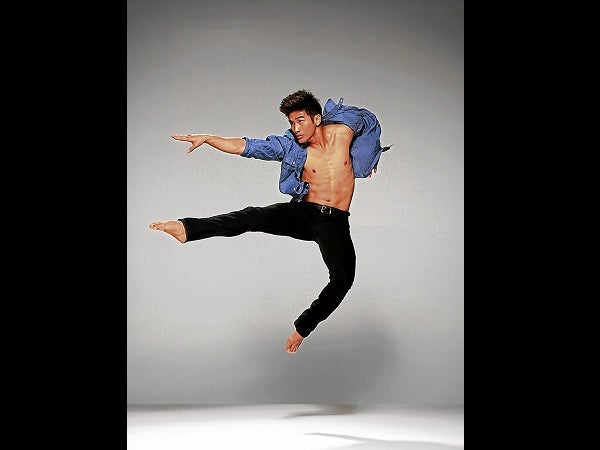 Fil-Am thinks he can dance… and boy, he definitely can

But what’s remarkable this season is that local couch potatoes have two insanely talented Filipino-American contestants to root for: contemporary jazz dancer Marko Germar and self-taught breaker Tadd Gadduang. Super recently got to chat with the 22-year-old Germar, who has an interesting back story: he got shot after being held at gunpoint two years ago, and the bullet’s still lodged in his shoulder to this day!

The show also serves up more eyebrow-raising antics from the judging panel this season, most notably a shoe-hurling tribute, a smooching frenzy, and a highly emotional display of waterworks from Lady Gaga herself. Interestingly, Germar’s solid performances were responsible for most of these memorable moments; tune in to AXN starting this Monday to see for yourselves.

What was it like for you growing up as a Filipino in Guam?

My dad is part Portuguese and my mom’s Filipino.  Not a lot of people know this, but I was actually born in Manila. At a young age, I moved to Guam, and that’s pretty much where I had my dance training and where I went to school. I love sinigang, especially the sabaw; the [more] sour, the better. And I actually know how to make it, because I’d see how [my mom] would cook it. I also know how to cook adobo!

What inspired you to dance?

When I first started to dance, my cousin had a dance group of his own. All I wanted to do was put my energy into something; I was always running and jumping around, so he brought me along. Whenever somebody’s not there, I would join the rehearsal and he’d have me fill in. I tend to be socially awkward; I get really shy and don’t know what to say, so whenever I dance, that’s where I’m most comfortable. I tell people, if you want to get to know me, watch me dance. I get a lot of inspiration from life; the good things and the bad, the worst and the best. That’s my way of expressing my emotions, just like a singer would sing or write something, or a poet writing a poem, or a musician playing a certain type of beat. With me, it’s my body.

Everyone has a sob story to tell, and yours happens to be the one where you have a bullet still lodged in your shoulder. Is that right?

Yes, ma’am. I was working front desk at my old job, and two guys just came in and one pointed a gun at my head. To be honest, it all happened too quickly and there was no time to think; it was all pure instinct. I just grabbed his arm and started fighting him—the guy was firing in different directions and he just happened to get me on the shoulder, which I did not know, by the way, until much later. The adrenaline that kicked in my body was so great that I felt super strong. I felt fearless, and I didn’t feel any pain, so I originally thought that he’d missed. But [later on] somebody said, “Dude, your arm is bleeding,” and when I looked at it and saw the hole, I was like, “Oh.” Then I felt the pain. (Laughs)

How long did it take for you to recuperate?

It happened in September 2009; I didn’t start dancing again until February of 2010. I was in a sling for about two months or so, and I had to undergo physical therapy three times a week for another two months. So yeah, about 4-5 months.

Has it ever caused you any problems or affected your dancing?

It has, especially when I did the tango with Melanie (Moore, fellow contestant). It was very important that I had to keep a strong frame with my arms, and it hurt. I would be in pain and I’d ice my shoulder right after because it would hurt. [But] for the most part, it doesn’t bother me because whenever I’m dancing with adrenaline, I don’t feel any pain; I just go right for it. But I do feel it after. (Laughs)

No, I don’t have plans of having it taken out. Undergoing surgery would mean going through the process of physical therapy and healing, and with the industry, I always have to keep going and I can’t afford to stop like that. I’m fine, and it doesn’t ruin my daily life [or] hinder me from dancing. I feel like a walking weather newscaster, because I can actually tell if it’s going to be cold the next day or if it’s cold outside when I wake up in the morning; my shoulder would just be tight!

We know Tadd has a “shirtless fan club.” Do you have one, too?

Yeah, we both [do]. (Laughs) People post [the pictures] together. I don’t really know how to respond to that, but hey, if you want me to take off my shirt, okay… (Laughter)

What were the challenges that you faced in the competition?

I’ve never trained in ballroom before, so that was difficult. But my mom was actually a ballroom instructor, so growing up, I was exposed to all the different styles. When I got in the show, my jazz training helped a lot, and I was able to do things that made me look like I knew what I was doing. (Laughs)

Another challenge on the show was not forgetting who I am, not losing sight of why I’m there in the first place. You know, just staying true to myself, being humble, not letting something like that get to you. I kept telling myself, “I’m here, I’m still in the competition because people like who I am. And once I change that, it’s gonna be different.” It’s me who got me there; it’s who I am.

What’s next for you? What are your new projects or ventures?

I’ve been living in L.A. for about 3 years now, and I’ve been a professional dancer before I got in the show. I have some teaching jobs coming up in the next few months, but before all those things, I got to go back to Guam for the holidays; I haven’t been back home since I’d left three years ago.

Maybe you could come visit the Philippines?

Yeah, I hope so! Tadd and I were talking about it and we were like, “We should probably plan a trip to go to the Philippines one of these days!” If an opportunity presents itself to someone who wants to bring us over to the Philippines, then absolutely, we’d take it in a heartbeat. I’d love to go and teach classes and stuff. If you guys want to bring us out there, you could e-mail me or tweet me or [reach me through] Facebook— facebook.com/d8marko or twitter.com/d8marko. Just let me know!

“So You Think You Can Dance” season 8 premieres on AXN with a 2-hour episode on Monday, Jan. 16, at 9:05 p.m., and will air twice weekly (Mondays and Tuesdays) beginning January 23.