‘Lungs’: Love in the time of millennials | Lifestyle.INQ ❮ ❯ 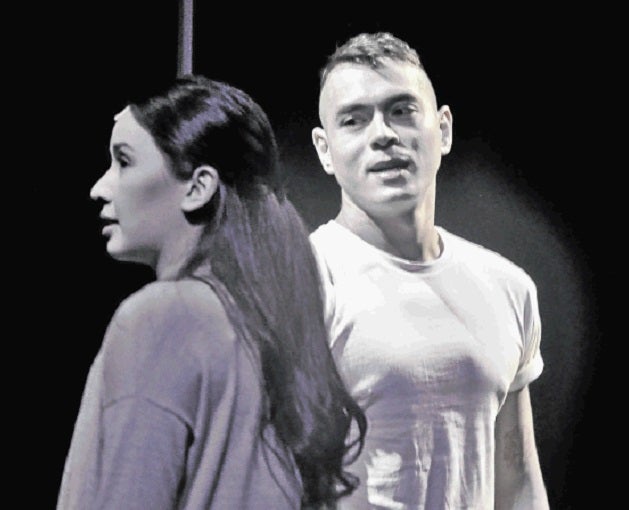 ‘Lungs’: Love in the time of millennials

In 9Works Theatrical’s production of “Lungs,” the scenes have snappy transitions, bridging time frames, from hours to decades, in seconds. Only two characters—an unnamed woman, W (Sab José), and her equally unnamed beau, M (Jake Cuenca, with Gab Santos as alternate)—essay the issues and the conflicts on an almost bare stage.

Questions such as commitment and child care are raised amid other urgent, bigger problems, among them a rapidly despoiling planet. The transparency extends beyond the stage design to the script, the characters baring their souls within minutes.

And while the expected moments of sweetness and passionate sex do happen, any flitting sentimentality dissipates into the couple’s equally intense need to be honest with each other.

It’s a love story for a 21st century that is fast being defined by the millennial audience’s penchant for lightning-speed on-demand services, social awareness and responsibility, and a rock-solid desire for disclosure and honesty, no matter how much it hurts.

Duncan Macmillan’s witty material, under Andrei Nikolai Pamintuan’s direction, strikes a smart, precise equilibrium that can spark a fiery argument about in-laws in one scene, then a solitary poetic meandering about human destiny in the next. The language is contemporary which a young audience can relate to.

But it is the way the playwright connects the daily trials and tribulations of a young couple in love to something more profound and larger than themselves—without blowing it out of proportion—that gives the play greater depth than your usual romance.

It’s as if the characters, despite their ordinary lives, are portraying the dilemmas of an era, and hence deserve a greater part of our attention. A light encounter in a park suddenly becomes a game-changer. Or the lady’s inability to move on can draw patience, if not actual sympathy.

Set designer Jodee Aguillon hints at this seemingly ageless universe that underlies the events onstage—a lone, bare stage in the auditorium surrounded by sheer darkness, like a lonely planet floating in space.

Miggy Panganiban’s minimal lightning serves as precursor of action, with lights at the end of the stage signaling the start and end of scenes. And when the change in lighting does stop, as it did in one pivotal scene, the effect can be jarring, enough to underscore the drama.

The chemistry between José and Cuenca is palpable, making their relationship believable, enough to draw sympathy. The attraction is almost natural, which makes any dalliance with other parties doomed from the start. The two actors shine when they act out the more contemporary issues of the material.

José does a standout job of making us like a character who is selfish and narcissistic. Her take-all mentality is softened by a vulnerability and a sense of confusion that wants to make sense of what’s happening to her.

Cuenca gets points for being the devoted, if perpetually befuddled, boyfriend who wants to do the right thing. But he seems lost once he starts delivering the loftier elements of the story.

The venue’s poor sound system does not help either, and the audience is left guessing whether the flaw lies in the actor’s English-language delivery or in the acoustics.

Improving this will help the audience’s further appreciation of the production.

The romantic conflict and resolution are easily understood. But the sense of urgency that Macmillan wanted to convey—embodied by the couple’s dilemma to bring new life into a destructive world—has yet to come out, and powerfully.