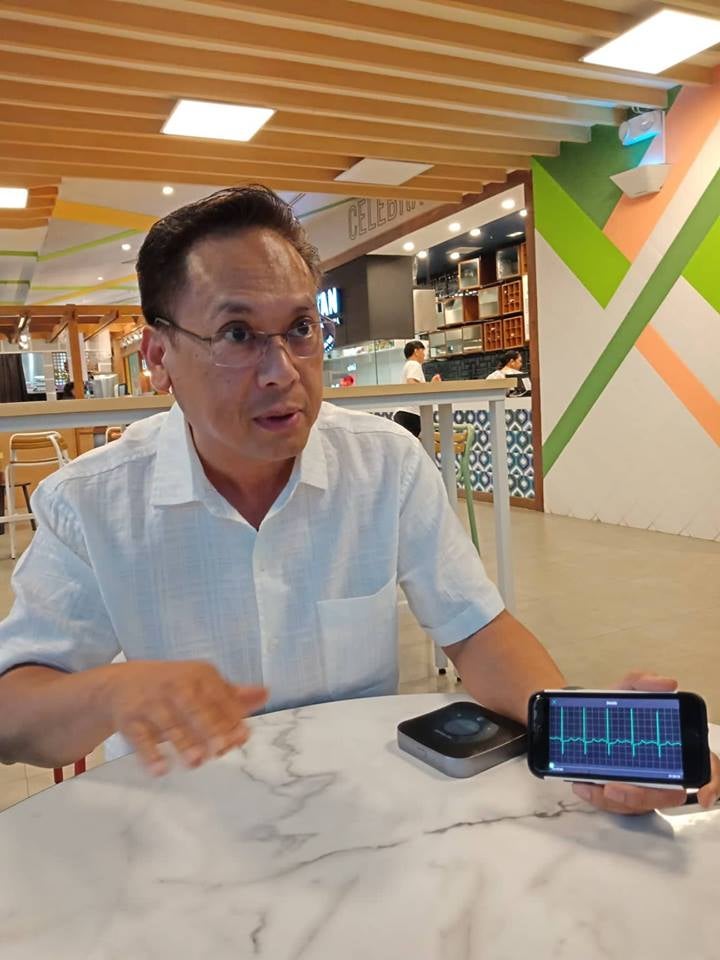 Stopping a heart attack is almost impossible. But it can be detected in advance.

A new method that pinpoints what part of the heart or which specific artery has been affected, or may still be saved, is now being practiced in California.

Its proponent, Dr. Nieto Baluyut Jr., is Filipino-born, whose family migrated to the US in his childhood.

He’s in Manila to introduce the method and train Filipinos in this field which he calls telemedicine, or monitoring a patient’s heart from a remote area.

The method is done through a new electrocardiogram (ECG) or EKG (the German acronym) apparatus that Baluyut says is the first blue tooth- and WiFi-enabled wireless heart monitor he calls EKG Live.

“I discovered that most doctors never had a formal, classroom type of training with EKG,” Baluyut tells Lifestyle. “Either they were self-taught or they just took a short course online. Most of the details never focused on the pathophysiology (the cause of the heart’s abnormality) but just memorizing the abnormality.”

He points out that “doctors should understand the initial changes (in a patient’s EKG reading) and how it can progress to more serious cardiac abnormalities.”

Baluyut teaches the EKG course himself. He is CEO and president of Health Career College, a school in Pleasant Hill, California, offering phlebotomy and EKG courses.

“In my class,” he explains, “I focus on how a heart attack can initially occur, rather than the outcome, which may be too late for the patient. For example, if a patient can be monitored by just putting a 24-hour EKG monitor called a Holter—presuming doctors know how to read EKG strips—they can diagnose a cardiac problem early. Doctors can perform intervention treatment right away.”

Baluyut is teaching preventive measures to save lives.

In 1966, Baluyut was five when his family moved to the US. He finished premed and clinical laboratory studies at San Francisco State University (SFSU), continued studying medicine in the Philippines, and went back to the US to practice for five years.

From 1998 to 2003, he taught anatomy, physiology, pharmacology and EKG at Los Medanos College and California State University.

Apparently word got around about his teaching method. A turning point in his career came when the State of California requested him to write the curriculum for the Phlebotomy Law that was passed by the California Senate in 2003.

“It became the prototype,” Baluyut says of his work. “As compensation for my efforts, I was offered to open an allied health school and to use Contra Costa Medical Center in Martinez, California, as my school facility—for free.”

The school’s EKG course—open to all health professionals and anyone interested, at least high school graduates—teaches the systematic reading of EKG strips in “9-step” and “5-step” methods that Baluyut says he developed and adopted in the past 15 years.

He explains: “Each time I developed an idea or method, I implemented it in the next class. Each succeeding class had an improved version throughout the 15 years, until I perfected it, but made it simple enough to teach laymen, not just doctors.”

In a nutshell, he says “the methods are designed not miss anything, sort of a checklist.”

The idea of sharing his knowledge with Filipinos was hatched when a colleague, Dr. Joel Villanueva, took Baluyut’s class.

After completing the course, Villanueva says, “I told Dr. Baluyut, ‘If I had taken this EKG class earlier in my 30 years of practice, I would have been a better doctor.”

Villanueva supported Baluyut’s plan to teach the EKG course in the Philippines and open an EKG call center in Manila.

The EKG call center will hire Filipinos to read EKG strips from all over the world. “It’s called telemedicine, which is about monitoring a patient from a remote area, not at bedside,” he says. “For example, we can monitor patients in the US to read and diagnose their EKG strips is Manila.”

Eventually, Baluyut says he will open a branch of his California school in Manila, with its own hospital.

Grand as the whole plan sounds, Baluyut describes it with the ease and precision of how he explains his EKG method.

“It’s time to give back to the country of my birth,” he says.