Couple on honeymoon buy hotel after getting drunk | Inquirer Lifestyle 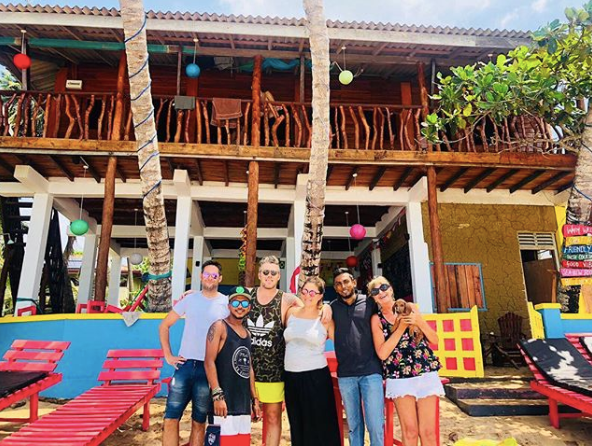 Couple on honeymoon buy hotel after getting drunk

Maybe an addendum would be not to be drunk in either of those situations, but a pair of newlyweds failed to follow this piece of wisdom — and are now proud owners of a hotel in Sri Lanka.

TV producer Gina Lyons, 33, and sales director Mark Lee, 35, who are based in London, celebrated their June 2017 wedding with a backpacking tour of Sri Lanka last December.

The trip lasted for three weeks, and in one of those nights, they found themselves in a beach town called Tangalle. While drinking rum on a hotel on the beach, they mused about putting up their own bed-and-breakfast. Like many ideas hatched in intoxication, the couple thought that theirs was a brilliant one and asked the bartender if the hotel they were in was for sale, Lyons recalled in The Sun.

Twelve glasses of rum in, they had concocted a business plan. The hotel’s lease was nearly up, they were told. The bartender, Isuru, contacted the owners, relaying the couple’s offer of £30,000 (P2.14 million).

The landowners agreed to the amount, and paperwork was set for signing the next day. Isuru was assigned as front-of-house manager and Milinda, a local they met running another hotel, would become their general manager.

The following morning, a hangover and reality hit the newlyweds. Still, they went through with the plan and agreed to finish paying for the hotel by March 2019.

The couple they met for renewing the lease did not speak English, so they brought translators. And since they didn’t understand much of the conversation, they began drinking again as the deal was being made, Lyons admitted to The Mirror.

Costs would soon pile up for their drunken decision-making: they shelled out £7,000 (P500,000) for legal fees and £6,000 (nearly P430,000) to renovate the place. On top of that, they were still paying off their wedding, living in a small flat and became “social recluses” to save money.

By June 2018, they had enough money saved to visit the hotel and refurbished it with a team of deaf and mute carpenters. Lyons noted that it was easier to use hand signals with their carpenters than deal with the language barrier in the country.

Three weeks shy of the July opening, they found out that Lyons was pregnant. It was happy news for the couple despite the timing. And finally, at the end of July, they threw a party to open their seven-bedroom B&B called Lucky Beach Tangalle.

The couple runs the hotel from the U.K., with Isuru and Milinda left in charge. Lyons and Lee intend to return after their baby is born. They also hope to buy more land for cottages for rent — and promise that they’ll be sober this time. Niña V. Guno/JB

Drunk man loses way to hotel, hikes up a mountain by accident