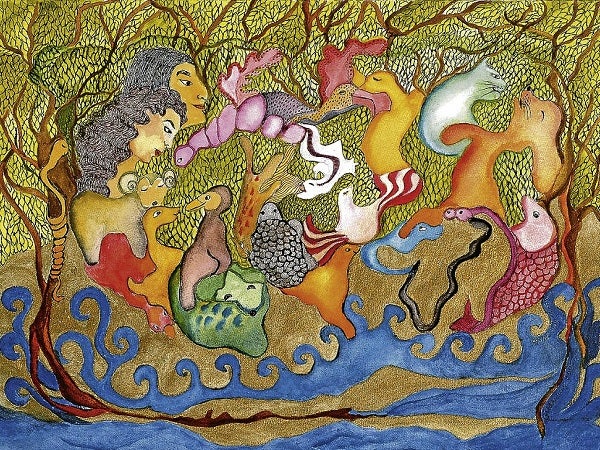 On the sixth day of the Creation, God made Adam. A lump of clay was shaped into a man and God breathed life into his nostrils. After some time, God thought it over. “It is not good for man to be alone.”

He made Adam fall asleep, and, taking out one of his ribs, produced Eve. (Some smart aleck in the 1500s counted ribs and found man and woman each to have 24, which raised a small tempest, since it seemed to contradict Genesis.)

Actually, Eve was Adam’s second wife. The first was Lilith, created from the soil at the same time as Adam. But Lilith was not the paragon of virtue. She was wild. She even refused to lie underneath Adam during intercourse.  Forced by her mate, she flew the coop in a rage and joined the wanton sprites of the sea. Lilith became a night demon with a tremendous sexual appetite, birthing hundreds of baby monsters every minute.

God took pity on Adam and created for him a more docile wife out of his own rib. Eve became the ideal, obedient and servile wife feminists have since protested against. Adam and Eve lived freely and happily in the beautiful garden, naming all the beasts in the field and the fowl in the air. There was lush vegetation all around and many fruit trees.

One of the trees, however, they were forbidden to eat of, and this was the Tree of Knowledge of Good and Evil. But the snake came and hissed into Eve’s ear that eating the apple would make them see good and evil and be like gods. And so, even if she feared God’s wrath, Eve bit into the apple and passed it on to Adam.

Confronted by God, Adam said Eve lured him. Eve said the serpent lured her. The serpent had no excuse and was made to bite the dust and crawl on its belly. Adam and Eve were banished from paradise and had to wear clothes and wash them and plant food and work, get sick and die.

The first children of Adam and Eve were Cain and Abel, and later Seth. Their descendants got into incestuous marriages with each other to produce the human race. Adam and Eve never got married. Adam lived for 930 years, a bachelor to the end.