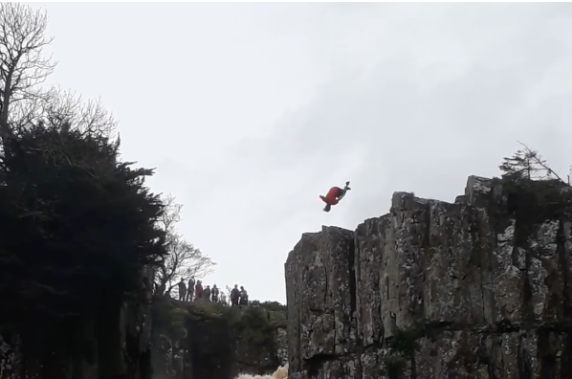 A man who jumped off a 71-foot cliff beside a powerful waterfall in Teesdale, County Durham, United Kingdom has expressed regret and urged others not to copy his actions.

Local media named Matty Harper as the daredevil, referring to him as an “experienced cliff jumper.”

Harper said in a Facebook post: “This is the biggest double flip I’ve ever sent however the current held me under for a while and I really struggled to get out, I’m honestly lucky to be here still. I strongly advise nobody to jump this waterfall!”

Neal Pattinson, the spectator who filmed the stunt and posted the video on Facebook last Sunday, Oct. 14, called Harper a “nutter.”

The Northern Echo reported that a teenager drowned two years ago while swimming in the waters below High Force waterfall.