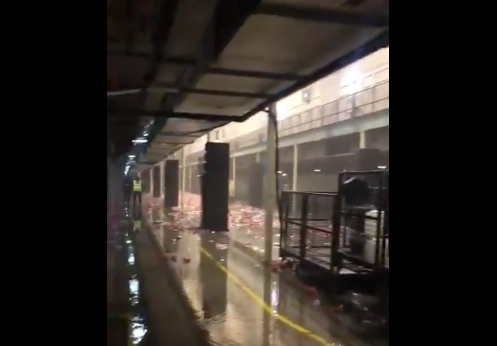 Image: Screengrab from Twitter/@hiyaimjen via Storyful

The Printworks club in London was forced to shut on Sunday, Oct. 14, because of flooding.

A clip of water pouring through the venue, posted by @hiyaimjen via Twitter on Oct. 14, had earned over 200,000 views at the time of writing.

Printworks been closed because someone broke a pipe, great one mate #printworks pic.twitter.com/K97jDbClgj

Several clubbers took to Twitter as well afterwards, blaming one patron who they said was doing “pull ups” on a water pipe, causing it to burst.

Printworks’ Solid Grooves event was halted shortly before 9 p.m. after an internal pipe was damaged, a statement published on the venue’s Twitter account said.

“The building was cleared in accordance with safety procedures and we are grateful to guests for their cooperation and understanding. We are investigating reports of an incident that is believed to have caused the leak,” Printworks said. JB

WATCH: Canadians line up to buy marijuana as drug is legalized