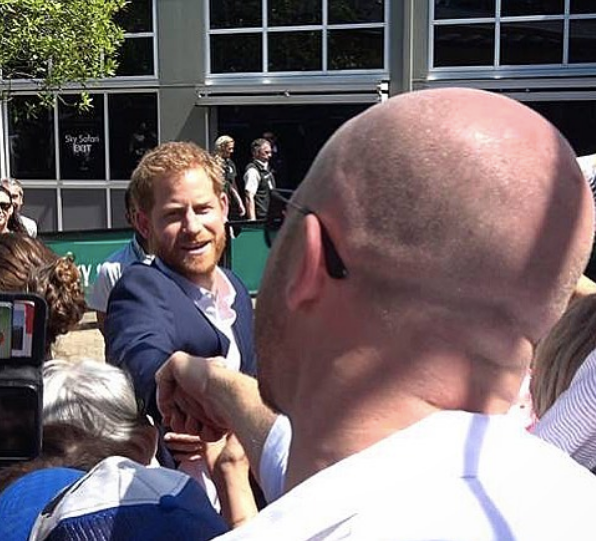 What would you do if a royal scolded you? For one man in Australia, it will surely be a moment to remember.

As Prince Harry and Meghan, Duchess of Sussex, are currently on a 16-day royal visit to Australia, Fiji, Tonga and New Zealand, one Australian radio personality made sure they were greeted with a warm welcome on Monday, Oct. 15.

Matt de Groot of Australia’s Nova 969 was tasked to give a huge bouquet of flowers to the duchess. While the bouquet was fit for royalty, de Groot told news.com.au that it was also costly for AUS $500 (around P19,000).

As Prince Harry and Markle walked their way to the crowd of people waiting for them, de Groot showed the flowers which the duchess noticed. Someone then reached out to give the bouquet, with Markle looking delighted.

Upon seeing what Markle received, Prince Harry suddenly turned to the crowd and scolded de Groot: “You can’t give flowers that big to my wife.” The prince then smiled at the radio personality, leading them to shake hands, and for Prince Harry to give de Groot a thumb’s up.

“Not going to lie – his hands were bigger than expected,” de Groot said on Instagram about shaking hands with the prince. “My new ‘ol mate was a delight to hang out with.”

Not going to lie – his hands were bigger than expected. My new ‘ol mate was a delight to hang-out with; I’m just waiting on his text for beers in Kirribilli. #PrinceHarry #TheRoyals #Mates #MeghanMarkle

De Groot told the news outlet that during his earlier attempt to give the flowers, police warned him of being “crash tackled” by royal security if he got too close.

Luckily, Markle was able to hold the bouquet. “She seemed genuinely excited and flattered by the size of the flowers and her people, who were with her, pointed out that she loved the fact that they were huge,” de Groot was quoted in the report.

The video of de Groot’s moment with the royals can be viewed below. Katrina Hallare/JB