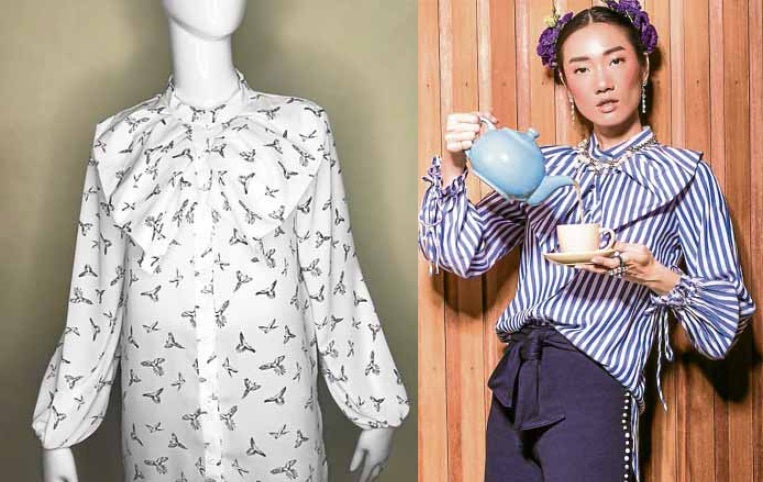 The Euterpe comes in various prints, like this bird and striped versions, and retails for P2,850 at @themuseprojectph on Instagram.

Him: Why did you ghost me?

He’s also a designer who spent much of the early 2000s playing on cheeky themes evoking color play and cutouts (before Fashion Nova and everyone else got in on the game).

At some point, he left for Bangkok, tired of the design scene, and instead entered retail, the bane of any creative.

But it was during his stint in Thailand that he learned more about women as consumers. “Consumers are very volatile, they are very unpredictable,” Louis says. “I guess you just have to learn how to surprise them by offering them something fresh and new.”

“Fresh and new” is his Muse Project, a new line he devised upon his return to Manila. “It’s one of the reasons I moved back to the Philippines after being gone for three years,” he says. “I had this urge to dress up women again.”

This latest venture is a women’s-wear label, marketed for “women of all types.,” with a price range of P1,500-P5,000. The line was crafted to address workwear and to fill the gap between basics and corporate attire. At the moment, clients can order via his Instagram @themuseprojectph, though a showroom in Malate is in the works.

Louis sees his brand addressing the gap between Uniqlo and, say, K & Company, with workwear that isn’t afraid of a few flourishes.

Victorian and Edwardian elements set the theme this time, with poufy sleeves, ruffles and bows serving as a starting point. “I was interested in adding drama, but nothing over-the-top.”

Louis says “anybody can be a muse,” so the label is trying to speak to all women, with prices that he’s made deliberately inclusive. “Eventually,” he adds, “we plan to carry bigger sizes for plus-size women so we can say, ‘Anybody can be a muse.’”