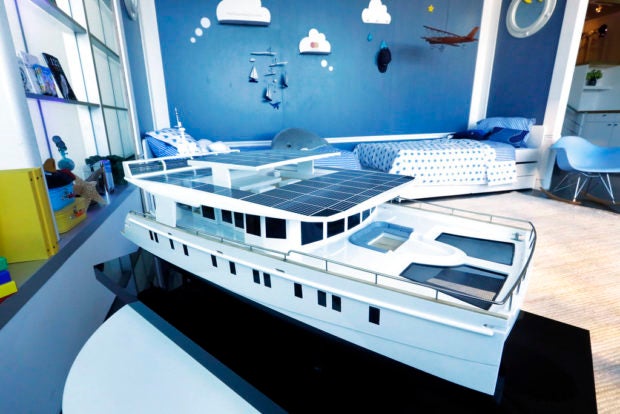 A model of the 74-foot Neiman Marcus Serenity Solar Yacht is displayed during a preview of the Neiman Marcus Christmas Book in New York, Thursday, Oct. 18, 2018. The solar-driven yacht that comfortably sleeps 12, comes with a fully functional kitchen, state-of-the-art music and entertainment system and a Neiman Marcus shopping spree before heading out to explore the deep blue sea. (AP Photo/Richard Drew)

NEW YORK — Need a $7.1 million (almost P381.4 million) yacht? How about jumping out of a plane on a top-secret spy mission with a $315,000 (almost P17 million) price tag? Perhaps a backyard luxury clubhouse sounds better, or a million pieces of candy.

No matter your taste, if you’ve got big bucks this is your time of year. The Dallas-based Neiman Marcus luxury department store company showed off its 2018 list of over-the-top fantasy gifts, with an emphasis on fantasy for those of us in the 99 percent. The list always garners plenty of attention, from those who covet the items and those who heap on scorn at its outrageousness.

A portion of proceeds goes to The Heart of Neiman Marcus Foundation for student arts support and other projects.
A peek inside:

For $630,000 (around P33.8 million), your gift recipient and three guests can travel by private jet on a 30-day trip to India, Nepal, Bhutan and the Maldives. There will be five-star hotels, secluded lodges and chic safari tents. But this is a wellness trip, so time with yoga masters, Hindu priests and monks is also involved. So are island cruises on a yacht and a helicopter tour of the Himalayas.

Topping this year’s offerings is a solar-driven, 74-foot bespoke yacht that comfortably sleeps 12. There’s a fully functional kitchen, state-of-the-art music and entertainment system and — perhaps the best part — a Neiman Marcus shopping spree before heading out to explore the deep blue sea.

Know any Bond fanatics? This experience will satisfy armchair operatives and adrenaline junkies alike. Fly to Las Vegas on a private jet for a three-day, two-night espionage adventure. A mystery man in a tuxedo greets a group of four with a top secret mission, including racing supercars and jumping out of planes, all with help from retired special ops forces.

Hippo in a tutu guy

New Yorkers and New York visitors may remember the 15-foot bronze hippo in the tutu at Lincoln Center that’s now gone. Well, that artist, Danish sculptor Bjorn Okholm Skaarup, can cast a family pet or favorite creature for a giftee, complete with a trip to Florence, Italy, to spend time with Skaarup himself at his foundry. $200,000-plus, depending on the size of the bronze tribute.

For $325,000 (almost P17.5 million), Sugarfina will set up a custom candy bar and ship off four people first class to the Italian Riviera for a luxe hotel stay and visit to the company’s candy factory in Genoa. The sugar junkies will spend the day with the company’s founders, take a behind-the-scenes tour and create some custom candy of their own. The sweetest part: Candy shipments home for up to three years.

Cosplay with an Oscar winner

Costume designer Colleen Atwood, who focuses on fantasy in such films as “Fantastic Beasts: The Crimes of Grindelwald” and “Alice Through the Looking Glass,” will design a custom piece and treat two for the day to lunch, swag and a possible film set tour of whatever project she might be working on at the time. Side note: She has four Academy Awards. $300,000 (around P16.1 million).

Be the VIP of Sloane Stephens, winner of the U.S. Open last year, and bring a guest to all four of the sports Grand Slam events. That means trips to Paris, London, New York and Melbourne, Australia for a week in each place. Stephens will throw in a 45-minute match. $555,000 (around P29.8 million).

He shed, she shed

A sanctuary of self-care or a den of indulgence? You decide. The folks at Studio Shed and Mark Ashby Design swing both ways in these custom backyard spaces measuring 10-feet-by-12-feet. From art to finishes. A logistical team is provided for installation. $250,000 (around P13.4 million). MKH

Ivanka Trump out of fashion at Canadian retailer

Cardi B hands out free winter coats in New York