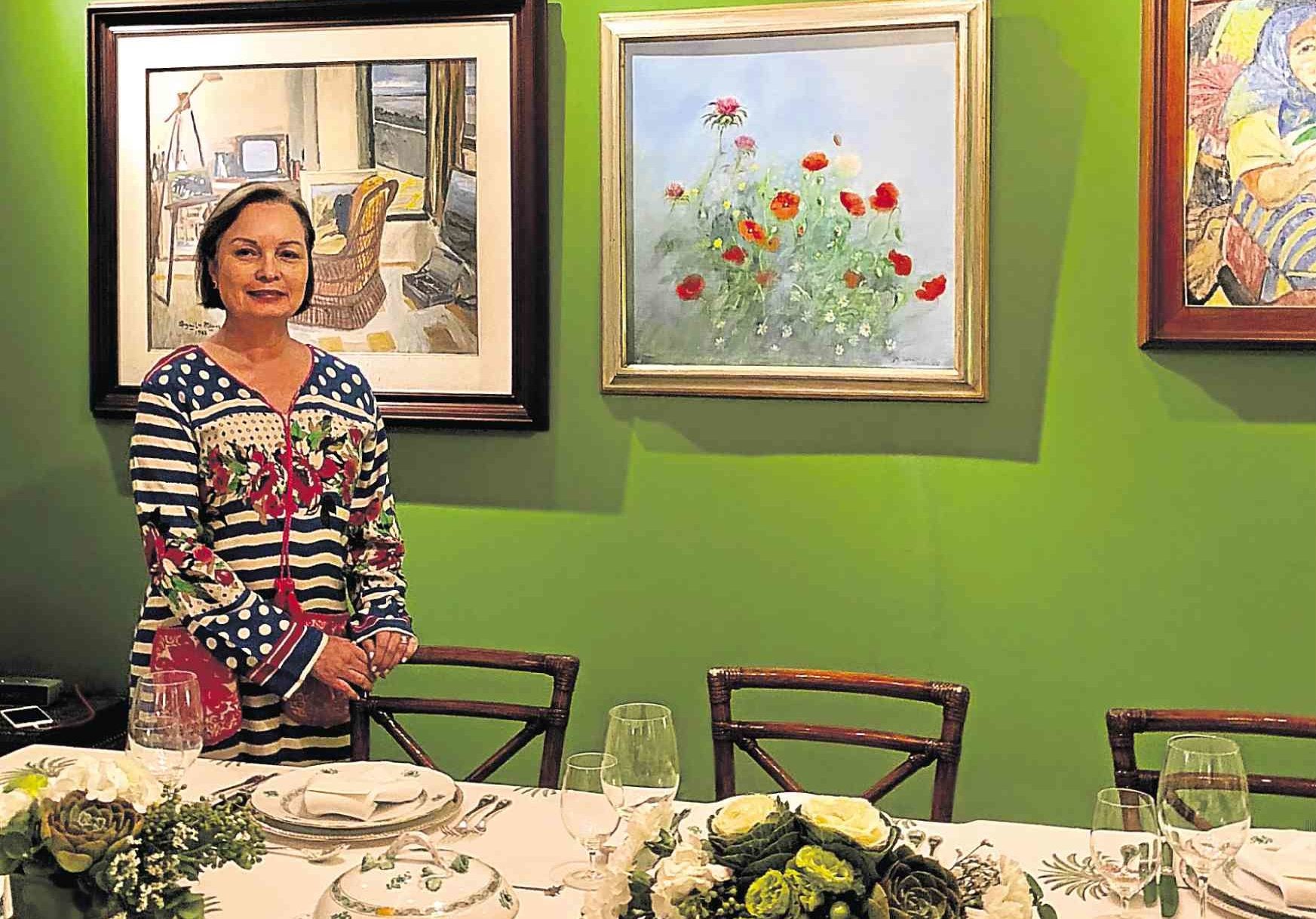 Last Thursday over dinner hosted by Cultural Center of the Philippines chair Margie Moran Floirendo (aka Miss Universe), we had some juicy dish. We stayed glued to our seats in her living room, listening to Margie recount how she found the painting of her mother, which had been missing for 25 years.

That wasn’t the purpose of the get-together. It was a birthday celebration, but the guests egged Margie on to tell the story.

Last Monday, opening the Lifestyle Arts page, she was stunned to see the photo of a painting, “Portrait of a Lady,” by National Artist Federico Aguilar Alcuaz. The Lifestyle article said it was among the items to be auctioned online by Leon Exchange.

The “Lady” is her mother, Rosario Moran, and Margie and her family have been looking for that oil painting all this time. So who was offering it for auction now?

In 1993, the painting mounted on the wall fell to the floor and had minor chips, so Margie had it sent to the studio of Alcuaz for restoration. However, as Margie disclosed in her Affidavit of Loss/Theft of Artwork, the “restoration was never finished and the painting was never returned to me.”

She continued in her affidavit: “After the death of Don Federico Aguilar Alcuaz on Feb. 2, 2011, his studio and paintings at the Manila Hilton hotel were cleared and distributed to the heirs but the painting of my mother could not be found.”

According to the affidavit, the painting was never found even after repeated requests and reminders given Alcuaz’s estate.

Last year, upon the advice of her lawyer friend—whose Alcuaz portrait of his mother has been missing, as well—Margie had the good sense to file the Affidavit of Loss/Theft of Artwork.

Last week, still stunned by what she saw in our Arts section, she went to see Jaime Ponce de Leon of Leon Exchange, bringing the affidavit and other documents as proof of ownership.

Margie said, “My mother.” And Ponce de Leon, with his characteristic candor—a trait, by the way, which has endeared this art entrepreneur to many in the local art scene—asked, “Is it stolen?” Margie said it had been missing.

While Ponce de Leon, bound by confidentiality, couldn’t tell Margie who consigned the painting—the provenance wrongly stated that it was the grandmother of the former Miss Universe—Ponce de Leon quickly made a phone call to one who must have been the source of the painting, in front of Margie, and told that person that the portrait had to be taken out of the auction lot because it was “stolen.”

Then Ponce de Leon readily assured Margie that the painting would be returned to her this weekend.

Of course, Margie felt relief last Thursday (no wonder she looked rather stressed when we joined her at cocktails after the concert tribute to the late Sen. Edgardo Angara last Wednesday at CCP), and was happy that Ponce de Leon was rather easy to deal with.

The portrait, done in 1977, was very special to Margie and her siblings. It was commissioned by her father, lawyer Francis G. Moran. Her mother, only 50 then, looked young and elegant in her blue dress.

“A few months after my father gifted her with the painting, he passed away,” Margie tells her dinner guests.

“We commissioned two portraits of my father, also by Alcuaz, in 1978—one for the family and the other for Bancom, where he worked. Now one portrait is with me and the other with my brother.”

Margie remembers distinctly the time of her father’s death. “He was 49. When he suddenly passed away, my mother and I were in Mexico City. I was invited to grace the 1978 Miss Universe Pageant in Mexico. The opening number was my recorded portion. I introduced the Miss Universe in Mexico City. After that we took the next flight home, and I missed the actual pageant in Acapulco.”

Margie’s mother is now 91, well, in high spirits, and can still move about. She was driving until recently, when she was flagged down for “reckless driving.”

To be fair, this was not the first time that the provenance of an artwork or art object to be auctioned was put in question. Auction houses are fairly used to that. And to be fair again, Ponce de Leon is known to rectify whatever goes amiss.

The local art auction scene is heating up, and there’s always something juicy that people love to talk about. The rivalry among the auction houses gets more interesting, if not sinister each day. Never a dull moment. Like a master’s signature that had been affixed to an item set to go on the block.  A bigger boceto being revealed on the eve of the auction of another boceto. The winning bids reaching dizzying peaks.

This is happening mainly because there’s a huge market—both supply and demand. Prominent estates have been putting some of their prized possessions on the block, and the hunt is an adrenalin rush for many buyers.

The buyers aren’t only the veteran or hotshot collectors, but also those with surplus money and even only minimum interest in fine art. The market has cut across economic and social demographics, and ages. I have friends who look forward to seeing the auction catalogs because they want to bid for watches and jewelry.

Lucratively employed young professionals are jumping on the bandwagon because they see art as good investment and the best hedge against inflation. (Is it really? It’s not that easy to sell should the need arise.)

But as Lifestyle has written many times, not only has the art auction scene commodified the visual arts to a level not seen before in the local industry, it has also spawned duplicity and dubious claims.

Winning bids could be hard to verify because of the rule of confidentiality. (However, a recent talk I had with a noted collector confirmed that the much-talked-about bid—P112 million—for a Joya was indeed accurate.)

Therefore, as the auction business grows by leaps and bounds, involving hundreds of millions of pesos, the need for media probity and acuity and buyer’s awareness grows.

Better yet, an art lover can go the route of seasoned art collectors—discover the artists new and young.

By today, we hope Margie is already reunited with her “mother.”