From the subway to the orchestra, the virtuoso sound of Venezuela's exiles | Inquirer Lifestyle ❮ ❯ 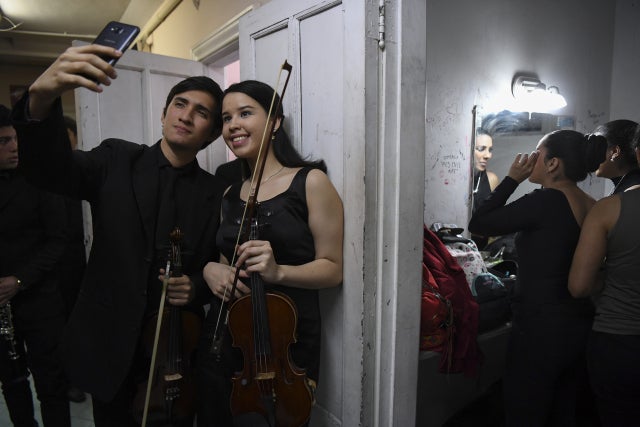 From the subway to the orchestra, the virtuoso sound of Venezuela’s exiles

The lights dim and the musicians start tuning the instruments they cared for along the arduous journey across South America, from Venezuela to Argentina, where they are about to perform their first concert.

This is the Latin Vox Machine, an orchestra of trained Venezuelan musicians who have emigrated to Buenos Aires to escape the economic crisis gripping their home country.

When the concert finishes, they are showered with applause, and even donations.

“This orchestra is special because when we play together it’s as if, for a moment, we were back in Venezuela,” said 22-year-old cellist Veronica Rodriguez.

Rodriguez left Venezuela at the end of 2017 due to the country’s collapsed economy and descent into widespread poverty.

She originally hoped to go to Paris where she had earned a place at a music school, but she didn’t have enough money.

Encouraged by a friend, though, she left the country for Brazil, where she took a flight to Buenos Aires.

At first she found work caring for the elderly but now she teaches music in a school.

Most of the Latin Vox Machine orchestra were trained in Venezuela’s prestigious El Sistema program and only arrived in Buenos Aires within the last year, taking to busking in the subway to earn a living.

‘You made my day’

At the Jujuy station, violinist Fedosky Suarez plays Vivaldi while Cesar Perez, on the platform opposite, responds with his bassoon.

Latin Vox Machine’s founder Omar Zambrano says he got the idea to create the orchestra after hearing the classically-trained Venezuelans playing in the subway.

“There was a moment in which I started hearing high-quality music in the underground,” he told AFP.

To his delight, the 36-year-old, who studied the piano but now works in audiovisual production, discovered the artists were, like him, Venezuelans.

“We started meeting up to see what would happen and how many there were: and there were a lot. It occurred to us that we should start an orchestra.”

It was at that time that the orchestra made contact with South Korean music director Ahn Jooyong, who moved to Buenos Aires two years ago following a career in the United States.

Someone showed him a recording of the Venezuelans playing and he was instantly smitten.

“They are all incredible musicians. To train young musicians like them to become professional musicians, it’s my goal and my mission,” said the 66-year-old.

“I’m deeply moved because you stop being you and become a group of people with the same mission and same motivation, which is making music and art and continuing to transform lives,” he said.

Jaime Nieto, 34, says the musical “instrument is for us one of the most valuable things.”

He specializes in the flute and piccolo and played a concert at the Colon Theatre in Buenos Aires when a child.

Leaving Venezuela six months ago he says “the passport and the instrument were the most important” things he took with him.

“It’s an extension of us and we look after it with our lives. I knew I would come here to make music. It’s happened and I’m happy for that.”

The orchestra isn’t just the preserve of Venezuelans, though, as it includes among its 90 members three Argentines, a Chilean and a Colombian.

“We want to share our space, integrating Argentines. We don’t want to be a ghetto,” said violinist Jocelyn Zambrano, 32.

Ahn added: “I would like to mix with Argentinian culture to make a unique orchestra.”

Ultimately, though, Nieto dreams of returning home one day, with the orchestra.

“We never imagined we would leave, but this is going to be a development for us and for all of Venezuela.

“One day the Venezuelans will return and take with them all the good they’ve reaped.” NVG