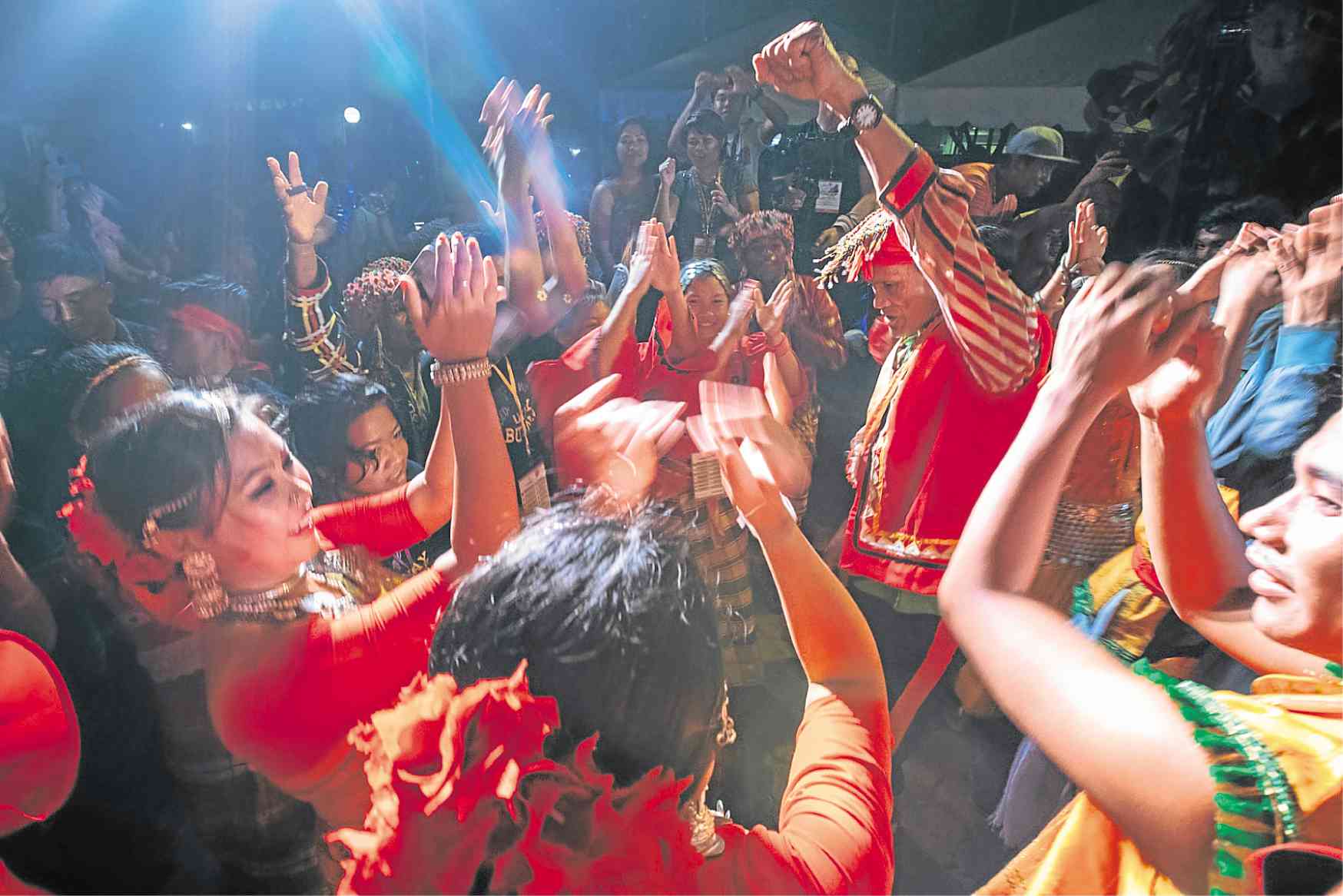 Indigenous groups from different parts of the Philippines join a cultural community from Indonesia to toast the closing of Dayaw 2018 in Roxas City, Capiz. –PHOTOS BY JILSON SECKLER TIU

National Artist for Literature and NCCA chair Virgilio Alma paid homage to the Gamaba awardees during the opening ceremony, calling them “rock stars” of the cultural communities.

“When we think of celebrating the heritage of cultural communities, the superstars who are here are the Gamaba awardees,” he said, adding that they were models of the country’s cultural and creative heritage.

Saclag, 76, said the festival was a good vehicle for people to experience for themselves the rich culture of the Philippines.

He added that Dayaw was a “good way to promote unity, peace and progress.”

Saclag also took the chance to have photos with Gamayo, 94, and Dulo, 104. He said he would like to live that long so that he could continue his craft and pass it on to the next generations.

The two Gamaba awardees who did not make it were Yakan musician Uhang Ahadas of Basilan and metalsmith Eduardo Mutuc of Apalit, Pampanga.

Activities in this year’s celebration include an interactive exhibit at Robinsons Place in Roxas City featuring the Gamaba artists and a section on the traditional arts by aboriginal artists of Australia.

Lectures and forums were held in schools and outreach performances were mounted in the towns of Jamindan, Mambusao, Pilar, Sigma and Tapaz.

Inaugurated was the Dayaw Cultural Village at the Capiz Eco-Park Park in Cuartero town.

Included in architectural showcase were the sapew ke meme of the Ati, payag of the Hiligaynon, Kinaray-a, and Akeanon ethnic groups, luma of the Jama Mapun, and lepa or boat house of the Badjaos.

In the Cuartero cultural village, the Capiz Institute for Living Traditions (ILT) will be erected soon. It will serve as the cultural hub of the province.

Al Tesoro, NCCA Subcommission on Cultural Communities and Traditional Arts head, said the ILT would be broader in scope compared to the School of Living Traditions, which focuses on the intangible cultural heritage of a particular community.

The ILT is an expanded SLT, he said, explaining that indigenous groups in Capiz would be integrated under this institution.

He said the building would be completed by the end of this year and house a café, gallery, workshop space, and training and performance areas.

Tackling the theme of the 2018 Dayaw, “Celebrating Heritage of Creative Communities,” Almario stressed that creativity is the heart of culture and that Filipinos must take care of the rich cultural heritage of the different ethnic groups.

“As creative industries flourish, the more we must take care of our traditions and heritage, which are springs of inspiration and from whose roots we blossom,” he said.

“As we celebrate 10 years of holding the Dayaw Festival, which has grown into a big and multi-faceted event, may it develop more to heal the disconnections from our own heritage and traditions,” Almario said. –CONTRIBUTED