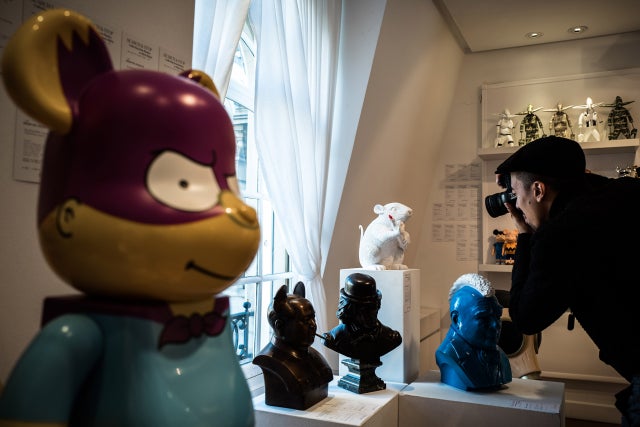 Artistic jaws dropped after Banksy’s audacious prank involving the shredding of his “Girl with Balloon” moments after it fetched £1,042,000 (about P72.4 million) — a joint record for the maverick, who had hidden a shredder in the frame.

Experts said that stunt only added to the value of the work — but in Paris, matters were much more low key as several oeuvres fetched above their reserve price albeit not by astronomical amounts.

Wednesday’s auction of 133 lots in all went ahead amid tight surveillance.

But this time there was no rip it up and start again from the artist from Bristol, southern England, who has never revealed his true identity.

A third work, “Queen Vic”, mocking Queen Victoria’s anti-homosexuality stance by depicting her in an indecorous pose astride another woman, went for 11,700 euros (about P764,000), around three rimes its reserve.

A plastic statuette of a rat holding a paintbrush meanwhile also found a buyer.

Banksy admitted that things did not go quite to plan at Sotheby’s where besuited champagne-sipping men and bejeweled women had initially looked on aghast as “Girl with Balloon” got stuck only half shredded.

Artcurial indicated before Wednesday’s controversy-free auction it had done background checks on attendees amid speculation Banksy himself had been at Sotherby’s and triggered the shredding.

If the Paris sales went off without a hitch, the unnamed female buyer of “Girl with Balloon,” which Banksy’s own authentication body Pest Control has labelled a new piece of work in its own right, “Love is in the Bin,” should do well out of the unusual deal.

Alex Branczik, Sotheby’s head of contemporary art for Europe, afterwards hailed the shredded sheet as “the first artwork in history to have been created live during an auction” while Artprice head Thierry Ehrmann indicated the work’s worth had likely increased to “more than two million euros”.

Artcurial’s own expert Arnaud Oliveux also suggested that the partial shredding meant the work became “something else” with its own artistic value.

Oliveaux, noting the media buzz created ahead of Wednesday’s auction, responded with humor when asked if he believed the artist was in the audience.

“That would surprise me. I only wish he were.”

During the auction, he also played on the hubbub the street artist had whipped up in London just over a fortnight ago, telling a woman hesitating on a raised bid for “Soup Can (Yellow/Emerald/Brown)”: “But, madame, Banksy is in the limelight. You’re going to regret it!” AB