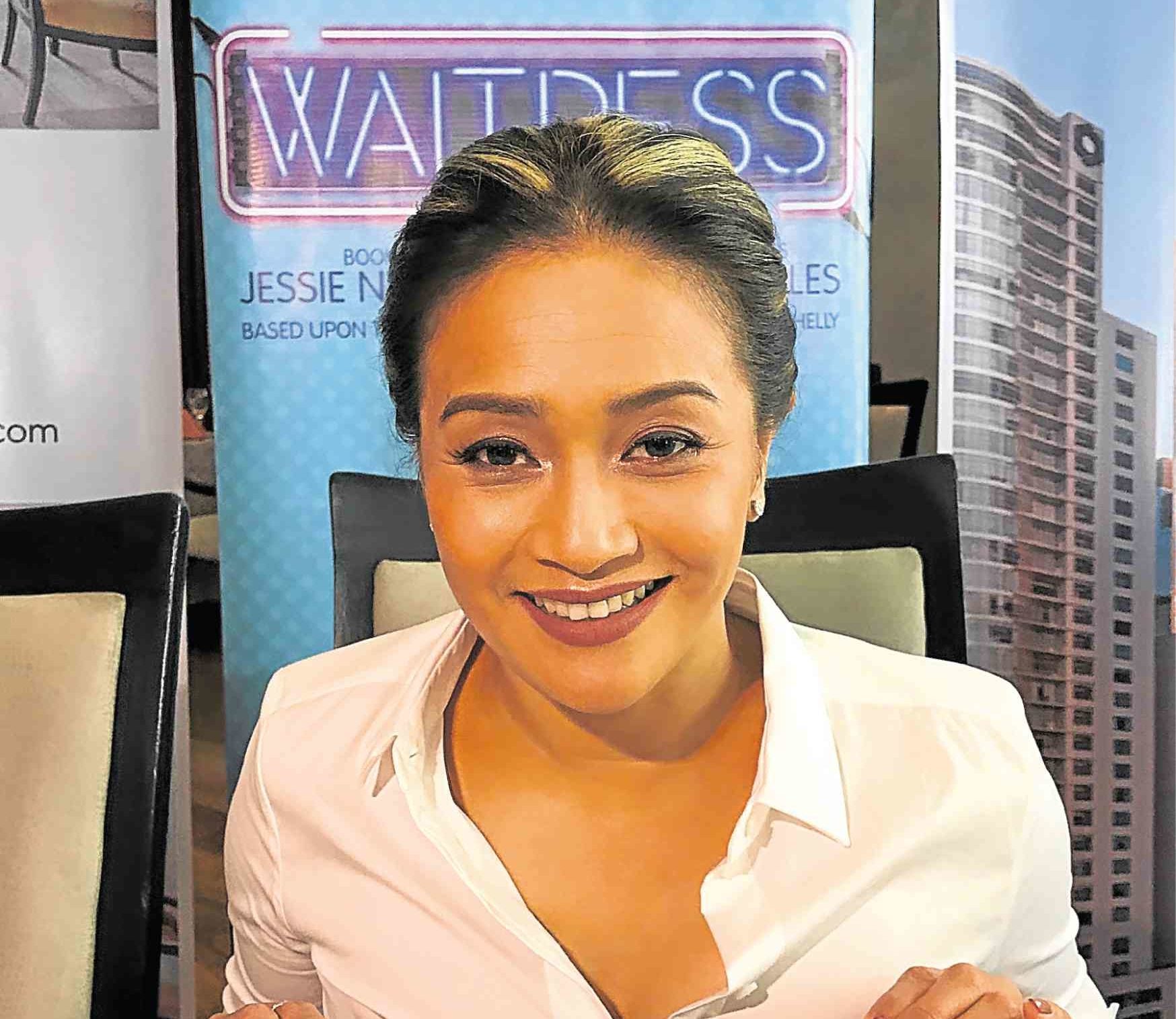 Ampil as Jenna: “‘Waitress’ is full of ingredients—metaphorically and literally.” —IRENE PEREZ

Joanna Ampil loves a good challenge: “The harder it is, the more I go for it.”

She won Best Actress as the mouse-catching spinster Candida in “Ang Larawan,” the film adaptation of “A Portrait of the Artist as Filipino” by National Artist Nick Joaquin. She just wrapped up the world tour of “Cats” as glam cat Grizabella. She does “not go anywhere near a kitchen,” but is learning how to bake for her character Jenna Hunterson in the international premiere of “Waitress.”

Inspired by the late Adrienne Shelly’s 2007 indie film, “Waitress” has the music of six-time Grammy nominee, soul singer Sara Bareilles. Based on the book by screenwriter Jessie Nelson, it is the story of pie maker Jenna, a waitress trapped in an abusive, loveless marriage, but unexpectedly gets pregnant by her husband, Earl. She then falls in love with her gynecologist, Dr. Pomatter.

Atlantis Theatrical is staging the heartwarming Broadway musical from Nov. 9 to Dec. 2, at Carlos P. Romulo Auditorium in RCBC Plaza, Makati City, and Ampil will be playing her most delicious role yet.

“The story is Jenna’s journey of finding her strength back,” Ampil said in an interview with Lifestyle Theater.

“‘Waitress’ is full of ingredients—metaphorically and literally. It is about women empowerment, mother-and-daughter relationship, friendship… and knowing that it’s never too late to have what you deserve in life,” she added.

She hadn’t watched “Waitress” the musical before she was tapped to play the title role by director Bobby Garcia (they worked together in “Bridges of Madison County”). So she researched—she watched the movie and studied the soundtrack while on tour for “Cats.” She needed to catch up with her co-actors who were already rehearsing for “Waitress.”

“I don’t like missing rehearsals,” she said. “Bobby was adamant that I memorize the whole script, so that we can fix the blocking as we go along. It was challenging, but after hearing the score by Sara Bareilles, I was extremely excited.”

She can also relate to Jenna: “Her passion is baking; for me, it is singing and acting.”

“Baking is Jenna’s escapism. It is how she deals with her mundane life… She creates her pies by her mood, and pours her emotions in it,” said Ampil.

At the interview, she sang a few lines from “She Used to Be Mine,” a sentimental ballad with, she said, “emotions and depth—a stand-alone song which is a story in itself.”

It discusses the “chance to start over again,” which is exactly what Ampil is doing now—“staying put” in Manila.

“After the legacy film ‘Ang Larawan,’ I am finally giving back to the Filipino audience,” she said, admitting that more people know of her work abroad, as part of the Broadway and West End casts of “Miss Saigon,” “Les Miserables,” “Avenue Q” and “Jesus Christ Superstar.”

“I traveled the world getting paid for singing in front of a warm audience every night,” she said. “Every now and then, when I feel down, I think of how lucky I am to be getting this life.”

Touring also trained her to be a more flexible artist.

“‘Cats’ was the first musical in Kuwait—and also the last, because they realized they are not ready for it yet,” she explained.

“In China, they love taking photos during the show, and you can’t complain about it because it’s part of their culture,” she said.

Does she ever get distracted?

“Yes, because I would see some faces light up during the show, but some people also do that in the Philippines, right?” she asked. “I had to adjust and focus instead on the story and text.”

She stayed in the zone, and considered such practice “almost like meditation.”

“In the midst of noise and and chaos, you forget about what’s happening outside. Besides, they are the ones missing out because they pay a lot of money to be on their phones,” she added.

Her peak performances, too, happened when she was under the weather, which was inevitable while doing eight shows a week across continents.

“It gets tiring,” she admitted. “but my acting is better when I have an off day—maybe I am overcompensating because I don’t want the  audience to see that I am tired.”

Soon, she will be in the movies, even soaps.

“I have been warned that it will be puyatan, but let me experience it, I want to judge it for myself,” she said. “I know all about the sigawan, sampalan, sabunutan sa putikan, of course!”

“‘Waitress’ is an uplifting musical,” Ampil said. “And I might even be able to bake a dark chocolate pie soon.”