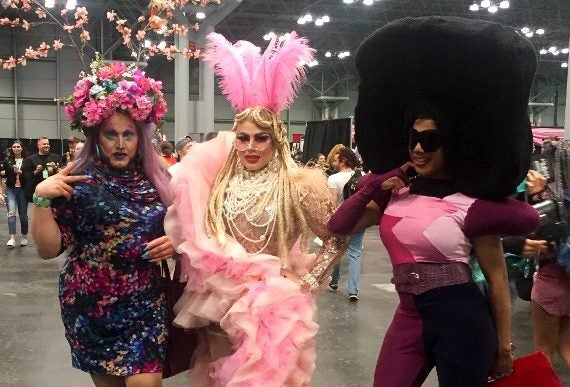 Drag Queens attend the RuPaul's DragCon at the Jacob K. Javits Convention Center in New York on September 29, 2018. - Long confined to gay bars, drag queen culture is now spreading like wildfire in the United States, to the point of becoming a real ecosystem, supported by the most famous of them, RuPaul, and the cult television show. (Photo by Thomas URBAIN / AFP) / With AFP Story by Thomas URBAIN: US icon RuPaul brings drag queens out of the closet

RuPaul brings drag queens out of the closet

Long kept within the confines of gay bars, drag queen culture is spreading like wildfire in the United States, propelled by the most famous of them all, RuPaul and his cult television show.

Nearly 50,000 people flocked to New York in late September for DragCon, a convention dedicated to all things drag, just four months after a similar event in Los Angeles.

“I wouldn’t have predicted this even five years ago,” says Raymond Alvarez, one of those attending the New York gathering. “It’s kind of surreal in a way. It’s such a very specific thing.”

The history of drag queens — people, usually men, who dress in women’s clothing and embrace exaggerated female stereotypes, often in stage performances — dates back more than a century.

The origins of the culture are uncertain.

Until recently, drag queens were almost exclusively associated to gay men and underground culture, with a few pop-ups in the mainstream, like the musical “La Cage aux Folles,” which inspired the film “The Birdcage.”

But “RuPaul’s Drag Race” — the reality competition TV show launched in 2009 — set the culture on a new trajectory.

Each episode of its 10th season, broadcast last spring, was watched by an average of 723,000 viewers — a record.

It also enjoyed Emmys glory this year with a clutch of awards including best reality competition show and best host for RuPaul.

“When ‘Drag Race’ first came out, the audience was cisgender gay men or LGBT folks,” says drag queen Lady Quesa’Dilla, also known as Alejandro Rodriguez, the host of the annual Bushwig festival organized in Brooklyn for the last seven years.

“And now it has become so mainstream. Its main audience is like middle school girls. And I think that’s the beauty of it.”

Anyone who saw Aquaria, the season 10 champion, elicit screams of approval from teens at DragCon in New York would have to agree.

“I like the makeup, the hair. These are things we can do,” said one teenager, who gave her first name as Sarah.

“It’s a little bit to the extreme but I like the creativity there.”

While most drag queens are still men, and RuPaul’s show is only open to male contestants, there are now cisgender women and transgender women taking part.

“It’s a celebration of individuality, of the freak in us all,” says Randy Barbato, the co-creator of “RuPaul’s Drag Race” and DragCon.

Barbato, his business partner Fenton Bailey and RuPaul have created a veritable drag empire under the umbrella of World of Wonder Productions that even extends overseas.

“We have to give RuPaul and ‘Drag Race’ credit for… making drag mainstream,” says Lae D Boi, a Brooklyn drag queen who attended the Bushwig festival.

“It’s wonderful because it allows us to be able to make it a full-time job  — because there’s more exposure.”

At 57 years old, RuPaul — birth name, RuPaul Andre Charles — is seemingly at the top of the world.

A mainstay on the drag scene for three decades, RuPaul is seeing major success thanks to charisma, vibrant personality and a sharp sense of humor.

Streaming giant Netflix just offered “Mama Ru” a fictional series, “AJ and the Queen,” which will debut in 2019.

She will play a “down-on-her-luck drag queen” traveling across America with an 11-year-old kid, Netflix says.

Versions of “RuPaul’s Drag Race” now exist in Thailand and Chile, but the trio behind the phenomenon don’t want to stop there.

They now operate the WOW Presents Plus online video platform, dedicated to “Drag Race” and LGBT culture. It is available in numerous countries.

“I think a lot of people are doing it just for the attention. Because now you can make money where I think initially, a lot of drag people weren’t doing it for money but because a lot of them wanted to express themselves.”

So, will going mainstream mean that drag queens tamp down their usual pleas for gay rights? Or relegate it to the past?

Barbato says no way. “Drag is the resistance,” he said.

“It’s just the resistance with pretty color and positive attitude. In America right now, it’s more important than ever.”  MKH