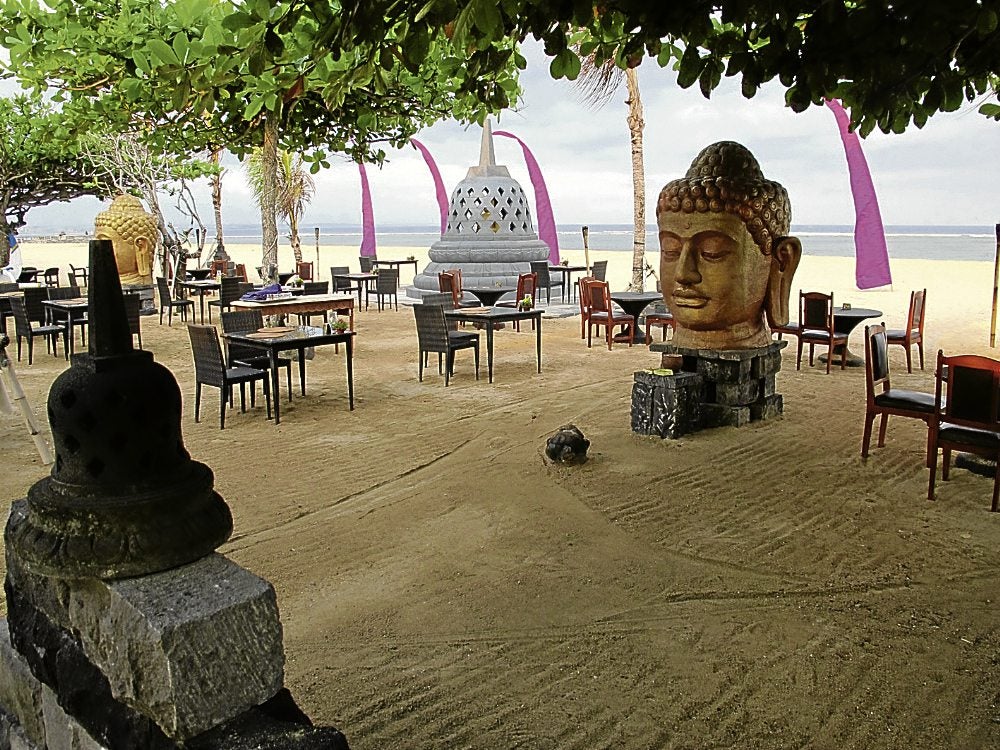 At Bali Ngurah Rai airport, I beat the queue to a newly opened window at the immigration counter. The officer who had just come on duty routinely stamped my passport while staring blankly through the glass enclosure toward the rapidly thickening queue of tourists forming in front of his window.

Everyone looked jaundiced under fluorescent lights. Tired from long flights, each zombie in the immigrations room just wanted to get out of the airport quickly and step into Bali at last.

I stepped into Bali close to midnight. We drove for an hour to my hotel in Sanur. Early the following morning, I stepped onto my high-rise balcony, inhaled the salt air, heard waves gently breaking on the shore below, and went into holiday mode.

While tourists were asleep and souvenir shops shuttered, I walked on a paved public path along the beachfront that ran past luxury hotels, restaurants and closed food stands that still smelled of last night’s beer and barbecue.

Service crews swept away the remains of the previous evening’s revelry from the beach and raked the sand. Tables and chairs were being set out in the outdoor restaurants, getting ready for the day.

The public path democratically exposed to one and all the different hotels’ pools amid lush tropical gardens that wind around tree-shaded terraces where extravagant breakfast buffets were being set up.

Touristic Bali was, well, very touristic, exactly what the guidebooks said it would be.

However, another side of Bali came into view when we drove up into the hills of Ubud to start our mission to investigate the Balinese cultural landscape and look into the national and local government’s protection and conservation plan for it.

Picturesque Ubud is thick with tourists, packed with the usual roadside craft and souvenir shops, restaurants, massage places and Internet cafés. On the surface, it feels just like any other tourist town.

We had lunch at Indus Restaurant on Ubud’s main road whose open decks in the rear overlooked a rural landscape of rice terraces and forests, peaceful and quiet, a cultural landscape irrigated by a network of canals dating back to centuries ago.

Cultural landscapes are scenic and beautiful places where humans and nature coexist in such balanced unison that it is difficult to separate the impact of one from the other. These landscapes were shaped by a long interaction of humans with nature.

The spectacular Rice Terraces of the Philippine Cordilleras, a Unesco World Heritage property, are considered the most dramatic rice landscape in Asia.

The difference between Balinese and other Asian rice landscapes is that the network of man-made canals irrigating the rice terraces is communally managed following an old, traditional method called the subak system.

Dating to the 11th century, the subak system is a social, religious and agricultural institution unique to the Balinese. It is a self-governing, democratic organization of farmers who manage the flow of water emanating from a single source from the crater lakes of Mt. Batur or Batukaru that are considered holy sites by Balinese marked by the largest and most important temples.

Water is believed to be a gift of the Goddess of the Lake. Therefore, temples always mark the point of origin of a water source.

From the temple source, a wide network of canals distributes the water downhill to the many groups of terraces that form the subak system attached to that particular temple.

During highly structured ceremonies, the temple priests allocate and control the flow of water to all paddies of their temple’s subak. They also assign planting schedules among the farmers to assure adequate water supply for all.

Through participation in the subak system, the Balinese learn how to manage and distribute limited water resources fairly, learning village organization skills, create equitable community welfare and to arrive at community decisions through consensus.

Farmers manage the system, coordinate planting and harvest schedules, always planting groups of terraces simultaneously for efficient water control. After harvest, farmers open canals, flood the terraces, drown rats and insects, and prepare the field for the next planting.

A single subak can consist of a group of paddies irrigated through canals and tunnels flowing from a single branch of a shared water source. Small subak groups connect to a larger subak group, ultimately connecting to an entire group of subaks all receiving water from the same temple source.

After the water channeling from the temple source is used for religious ceremonies, canals and tunnels transfer water downhill for distribution to all subaks that branch out from the same source.

Excess water channels downhill from one paddy cluster to irrigate the next, ultimately emptying to a river or the sea.

To be continued next week.