The world according to Irvine Welsh | Lifestyle.INQ ❮ ❯ 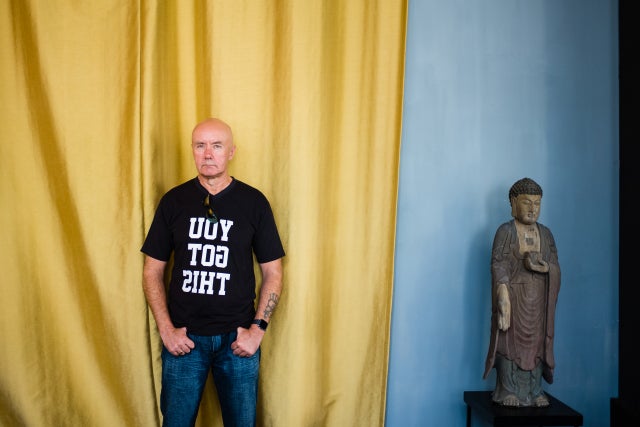 Great for writers, terrible for citizens: The world according to Irvine Welsh

Twenty-five years ago Irvine Welsh’s debut novel “Trainspotting” burst out of the housing schemes and back alleys of post-industrial Scotland in a whirlwind of drugs, sex and violence that horrified and delighted critics alike.

The novel’s protagonists have long since scammed, snorted and stolen their way to cult status, helped along by a hugely successful film adaptation.

And Scotland’s most famous ex-heroin addict is still delivering the goods, and says he is as far as ever from settling for “carpet slippers and a cottage on the coast”.

In town for the Hong Kong International Literary Festival Welsh told AFP the world right now “is a terrible place to be a citizen in but it’s a great place to be a writer in”.

He is tight-lipped about his current project, which is set in a Trumpian future and will have mass shootings as its main theme, other than to say that like every other, he is “constantly engrossed in it,” and that it’s “nearly finished.”

Welsh is happy that “Trainspotting”, his first creation, is still “bubbling” away in the age of the smartphone-toting millennial.

In 2013 it was voted readers’ favorite Scottish novel of the past 50 years.

And last year Historic Environment Scotland awarded listed status to Edinburgh’s “Banana Flats,” a textbook example of New Brutalist architecture made famous by the novel as the home of one of its characters, Simon “Sick Boy” Williamson.

Since 1993, Welsh has gone on to write 15 more books as well as a number of plays and adaptations, casting deeper into the murky lives of Edinburgh’s pimps, bent cops, burglars and dealers.

He has also moved from brutal chronicling of the dismantlement of post-war Britain, to America, where he takes violence and aggression off the football terraces and into the basement of a serial killer.

He has laid into President Donald Trump in expletive-ridden Tweets and has criticized his brand of populism as a sham, but says he still feels compelled to write about America.

“With everything that’s going on in the States it’s difficult not to write about it,” he says.

“Just in the last few days a lot of things in the book are now rendered irrelevant in a way, because events have just moved on so quickly, so it might need a redraft again.”

The Union ‘has to go’

His homeland is in flux too as Brexit asks new questions of what the U.K. stands for and how those living in its constituent parts see themselves and each other.

He recalls 1970s London and spending summer holidays there with an aunt, where he felt “very British then. I felt very Scottish too… there was a kind of unity… all that stuff was wrecked by thirty years of neoliberalism, and I don’t think it’s coming back.”

“Now I’m not so much pro-Scottish independence, but anti-U.K.,” he says, terming the more than 300-year old Union “false, artificial… and detrimental to the development of progressive forces”.

Welsh does not limit himself to the written word. He is on a personal quest to inject some fun back into an electronic music scene he sees as too sanitized, serious and obsessed with technology.

“A lot of the young DJs today, they’ve been doing it since they were 10 years old in their bedrooms …the bedroom’s been their studio. You’ve got people playing dance music who don’t dance… they sit, masters of the technology but they don’t go out and have any fun.”

An album of his own is in the works, a “counterblast” offering of electro/techno that he is confident will bring some humor and fun back to the dance floor, “especially me singing with a German accent”.

But that doesn’t mean he’s giving up writing. Far from it.

“The writer’s life is absolutely fantastic,” he says.

And still one that permits the odd juvenile relapse.

“I shouldn’t really say I don’t party hard these days after the past couple of nights in Singapore,” he says coyly.

“Singapore’s not known for that, more for locking you up forever for that sort of thing. But I think that’s what appealed to me, the transgression element to it. I had quite a whale of a time.” NVG